Royal Navy’s most advanced destroyers break down in the Gulf because the water is too WARM, bungling defence chiefs admit

June 7, 2016
Britain’s £1billion a piece Type-45 Destroyer ships break down in warm water and are being retrofitted with diesel generators, defence chiefs have admitted.
Complicated Rolls Royce gas turbine engines work in the cold water around Britain but the vessels have been left adrift in the Gulf on several occasions because of failures.
The problem first became apparent when HMS Daring lost all power in the mid-Atlantic in 2010 and had to repaired in Canada.
The ship needed fixing again in Bahrain in 2012 following another failure.

MPs were told of the problems at a defence committee hearing into the problems amid claims the number of new frigates due to be bought by the Government could be slashed as a result.
The Daily Record revealed the problems today and said their were fears of job losses at the Clyde shipyards as a result of the problems.
Former First Sea Lord Lord West today slammed the failures and told MPs: ‘This is not a good position to be in.’
He told the Ministry of Defence had ‘run out of money, effectively’.
Rolls Royce told the committee the engines installed in the Type-45 Destroyers had been built as specified – but that the conditions in the Middle East were not ‘in line with these specs’.
SNP MP Doug Chapman, a member of the committee, said: ‘I am stunned. A £1billion asset in a warzone and we don’t know if people will come out alive because of a power system fault.’
The Ministry of Defence has planned a staggered refit of the six Type-45s from 2019 to ensure vessels remain in service and available for deployment.
Fitting a pair of diesel generators in each of the billion-pound ships will require cutting a large hole in each of them.
The expense is expected to place a further burden on stretched defence budgets.
Ahead of today’s hearings, a Whitehall source told the Record: ‘We can’t have warships that cannot operate if the water is warmer than it is in Portsmouth harbour.
‘These ships have to have a global reach and it looks as if the engineering has compromised them.’ 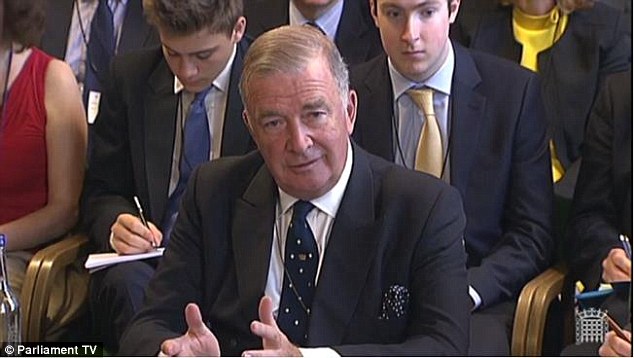 Lord West, pictured at today’s defence committee, said it was a ‘bad position’ for the Navy to be in to have to refit the six Type-45 Destroyers
Source: dailymail.co.uk
(Visited 9 times, 1 visits today)

Britain’s Nuclear Weapons: Money for Nothing