On June 21,  250 top military brass, military planners, corporate military-industrial  ”defense” contractors, top officials and scientists from the nuclear weapons laboratories as well as prominent  academics gathered at the Crowne Plaza Hotel in Albuquerque, New Mexico to discuss, debate and promote the Pentagon’s One Trillion Dollar Nuclear Weapons program.
Russia is allegedly “threatening the Western World”. The objective is to develop the pre-emptive use of nuclear weapons (i.e. nuclear war as a means of self-defense).
The event organized by “The Strategic Deterrent Coalition” (a non profit organization) was  funded by Northrop Grumman, Lockheed Martin, Boeing, Orbital ATK, BAE Systems  among other generous donors.

Among the main speakers (see program here)  were Adm. Cecil Haney, Commander of the US Strategic Command (STRATCOM), Lt. Gen. Jack Weinstein, Dep. USAF Chief of Staff for Nuclear Integration, Gen. Robin Rand, Commander, Air Force Global Strike Command, Gen. (ret.) Frank Klotz, Administrator, National Nuclear Security Administration (NNSA), as well senior officials from America’s top weapons labs including Sandia, Los Alamos and Lawrence Livermore. Representatives from the UK, Canada, Denmark and the Republic of Korea (ROK) were also in attendance.
According to STRATCOM Commander Adm. Cecil D. Haney, ”America is quickly running out of time to ensure the viability of its nuclear deterrence and must invest the funds to upgrade not only its nuclear weapons stockpile, but the missiles, submarines and bombers capable of delivering a strike we hope we never have to make”. (Albuquerque Journal, June 22, 2016)
Adm Haney refers to “deterrence”, a Cold War concept which was officially scrapped in 2002 (under the 2001 Nuclear Posture Review). What is contemplated under America’s nuclear doctrine is the first strike pre-emptive use of nuclear weapons against both nuclear as well as non-nuclear states.
The enemies of America were clearly identified. The aggressor nations against which the “preemptive” use (for self-defense) of  advanced nuclear weapons is contemplated were  explicitly mentioned:

Haney presented an overview of the world’s “strategic environment” which he said may be at its most precarious point in history – in large part because of the actions of Russia, China, North Korea, Iran and extremist groups such as the Islamic State and al-Qaida.
Russia poses a threat just by virtue of the size of its nuclear arsenal, which it continues to modernize, but it’s also improving its conventional military forces, maintaining a significant quantity of non-strategic nuclear weapons and aggressively pursuing new war-fighting technologies, he said. (Albuquerque Journal, June 22, 2016)

The event sponsored by the Strategic Deterrent Coalition (SDC) was geared towards the “education of decision-makers on the importance of a “valid nuclear triad” – strategic bombers, land-launched missiles and submarine-launched missiles – according to its board president, Sherman McCorkle.” The notion of Triad “relates to the fact that U.S. strategic nuclear weapons are based in the water, on land and in the air”
Propaganda: Sensitizing “Top Officials”
The SDC’s “educational endeavor” largely consists in building a consensus in favor of pre-emptive nuclear war (within the Armed Forces, the science labs, the nuclear industry, etc). It’s is a form of “internal propaganda” intended for senior decision makers (Top Officials) within the military as well as the weapons industry. The emphasis is “building peace” and “global security” through the “pre-emptive” deployment of nukes (Air, Land and Sea) against four designated “rogue” countries, which allegedly are threatening the Western World.
The debate was coupled with veiled threats pointing to the possible use of nuclear warheads on a first strike basis against Russia, North Korea and Iran:

Coupled with Russian President Vladimir Putin’s rhetoric and “destabilizing actions in Syria and Ukraine,” Haney cautioned that “Russia must understand that it would be a serious miscalculation to consider nuclear escalation as a viable option.”
North Korea continues to undermine regional stability by conducting nuclear tests and advancing its ballistic missile technology, Haney said.

Iran’s continued involvement in Middle East conflicts and development of ballistic missile programs and cyberspace capabilities require vigilance, particularly if there are any shifts in Iran’s nuclear ambitions, he said. (Albuquerque Journal, June 22, 2016)

Theater of the absurd: the US is intent upon using nuclear weapons as a means of self defense against Al Qaeda and ISIS under the Administration’s counter-terrorism initative:

And the United States is part of an international campaign against violent extremist organizations groups “seeking to destroy our democratic way of life.”
To effectively keep adversaries and potential adversaries in check, America must maintain “a safe, secure, effective and ready nuclear deterrent.”

Lest we forget, Al Qaeda was created by the CIA and the ISIS is supported and funded by two of America’s staunchest allies: Turkey and Saudi Arabia.

The One Trillion Dollar Question: “Blow up the Planet”, “Bankrupt  the Country”
“Blowing up the Planet” through the use of “peace-making nuclear bombs” is a money making undertaking, a corporate bonanza  for what Eisenhower called “the military industrial complex”:  ”All three legs of the “nuclear triad” must receive considerable investments to ensure their long-term viability” (Adm. Haney, op cit).

The expenditure is for a 30-year program to “modernize” the US nuclear arsenal and production facilities. … This plan, which has received almost no attention by the mass media, includes redesigned nuclear warheads, as well as new nuclear bombers, submarines, land-based missiles, weapons labs and production plants. The estimated cost? $1,000,000,000,000.00 — or, for those readers unfamiliar with such lofty figures, $1 trillion.
Critics charge that the expenditure of this staggering sum will either bankrupt the country or, at the least, require massive cutbacks in funding for other federal government programs. (Prof. Lawrence S. Wittner,  The History News Network)

… “the nuclear option should not at all be taken off the table. That has been my position consistently.” (ABC News, December 15, 2015)
“I want the Iranians to know that if I’m president, we will attack Iran. In the next 10 years, during which they might foolishly consider launching an attack on Israel, we would be able to totally obliterate them.” (ABC “Good Morning America.”, quoted by Reuters, April 22, 2008 during 2008 presidential election campaign)

The World is at a dangerous crossroads. A new arms race has been launched. It’s planning horizon is thirty years. The money allocated by the US federal government to the development of America’s pre-emptive nuclear war arsenal is of the order of one trillion dollars, that is the preliminary estimate, an astronomical amount (which could be increased):

“Today, our stockpile is the oldest it’s ever been, with the average age of a (nuclear) warhead at 27 years and growing,” he said.
The nation’s national security labs – like Sandia, Los Alamos and Lawrence Livermore – are key to ensuring the viability of the nuclear arsenal.
Despite the challenges, Haney said, “U.S. Strategic Command is a ready force capable of delivering comprehensive war-fighting solutions.”

In  response to this venue, the Los Alamos Study Group (LASG) organized a counter-event symposium on June 20-21. The LASG referred to the  Strategic Deterrent Coalition’s Symposium as the “Doomsday Forum”.
According to Los Alamos Study Group (LASG) director Greg Mello: ”This Symposium comes at a time when ambitious US nuclear weapons plans, expected to cost $1 trillion over the next 30 years, are coming under withering criticism from recent US senior military and civilian defense officials, independent analysts, members of Congress, and diplomats”.
The nuclear weapons plan constitutes a multibillion dollar bonanza, ironically, for the military industrial contractors which generously financed the Symposium:  ”…Air Force nuclear weapons replacements and upgrades are expected to cost hundreds of billions of dollars. Much of that money would go to the sponsors of this symposium.”
This important event –which consists in building a consensus in favor of a possible first strike pre-emptive US nuclear attack against Russia, China, Iran and North Korea– has barely been covered by the mainstream media.
Oops….The organizers must have got their countries mixed up: North Korea was on the list of invitees. Canada was not mentioned. (see below) 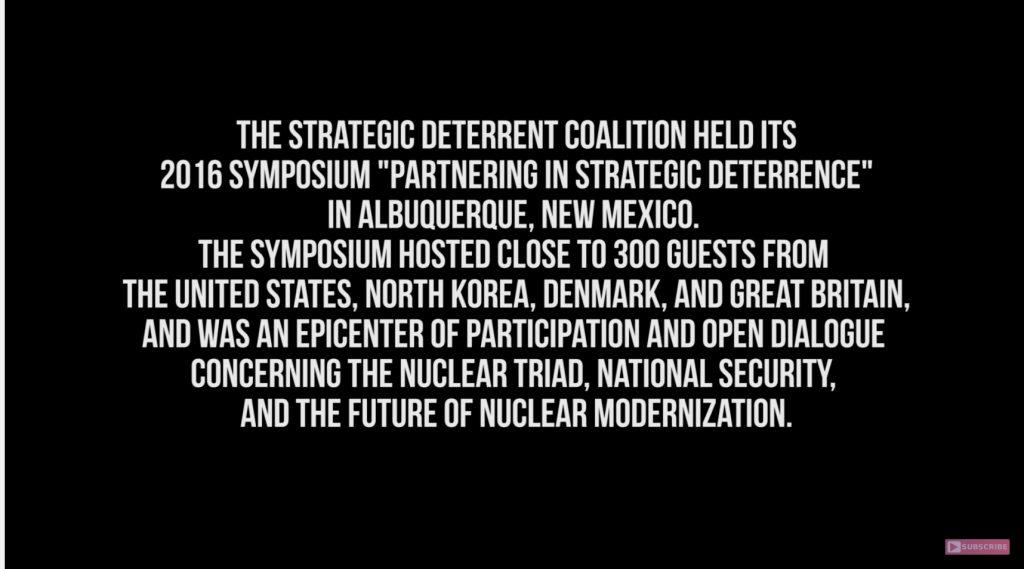