China plans to launch its second space station later today, with a two-member crew to follow next month, according to China space agency officials. The launch of Tiangong-2 is another step towards China’s goal of a self-sustaining space station by 2022, and a reminder of the nation’s space prowess.

A Long March 2F rocket will launch Tiangong-2 from China’s Gobi Desert at 22:04 local time, coinciding with the lunar Mid-Autumn Festival, Chinese officials announced. It will manoeuvre itself into orbit about 380 kilometres above Earth, then raise its orbit to 393 kilometres when a Shenzhou-11 capsule arrives in October carrying two astronauts, who will live on the station for 30 days.

The station is designed for a two-year lifetime, and will dock with China’s first cargo ship, Tianzhou-1, in April 2017. The station is 18.4 metres wide and weighs 8.6 tons, said Wu Ping, deputy director of the China Manned Space Engineering Office, in a press conference broadcast on state-run media.

Despite its small size and short lifespan, Tiangong-2 is an important precursor to China’s larger space station, which it aims to launch on a Long March 5 rocket in the next six years, says Dean Cheng, a Chinese space policy expert at the Heritage Foundation in Washington DC. Next year will bring China’s 19th Communist Party Congress, in which prime minister Xi Jinping is expected to win a second term, and a new space station is a sign of the party’s prowess, Cheng adds.

“It’s a reminder that China has a manned space programme, including the ability to put its own astronauts into space, something the Americans cannot do,” he says – US astronauts are currently flown by Russia. “It’s about national pride, but it’s also, as the Chinese would put it, ‘very dense in high technology’. And it has military implications, and they are very upfront about this. All of these are elemental to why are they doing this.”

It’s not all for political posturing, though. Tiangong-2 carries 14 experiments, including atmospheric sensing instruments that can detect air pollution. It is equipped with a precise atomic clock, which is accurate to one second every 30 million years. The clock will help measure fluctuations in microgravity with greater precision, according to the space agency.

The station will also contain cardiovascular health experiments, a quantum communications experiment, a plant cultivation study and a gamma-ray burst instrument called POLAR, which is a collaboration between Chinese, Swiss and Polish scientists.

That experiment reflects China’s interest in joining forces with smaller nations and developing countries, which lack their own robust space programmes, says Scott Pace, director of the Space Policy Institute at George Washington University in Washington DC. Earlier this year, the China Manned Space Agency and the UN announced a partnership to allow UN member states to conduct experiments and send astronauts to the Chinese space station. Pace says this benefits China’s image as well as its economy.

Wu says Tiangong-2 has several upgrades compared with Tiangong-1, which launched in 2011. These will include a new mechanical arm; new equipment to perform medical experiments; and better living quarters with new exercise and recreation facilities. The changes will make astronauts’ 30-day stay in space “more comfortable, more convenient and more colourful”, Wu says.

Tiangong-1 lost communication with Earth in March, but is still in orbit roughly 370 kilometres above us. It is losing about 110 metres of altitude every day, and is expected to re-enter the atmosphere sometime late next year, though scientists are unsure where or when this will happen.

Wu acknowledged recent launch failures, but did not directly address the suspected failure of a Long March 4C on 31 August.

Cheng says development of the Long March 5 is behind schedule, so another successful Tiangong launch is a point of pride.

“I would say they are quite self-sufficient, and happily so. We sort of assume a lot of the time that they are just hankering to join up with [the US], and I would suggest that no, the evidence is not at all clear,” Cheng says. “They would like international recognition, of course. But they are not going to play second fiddle to anyone.” 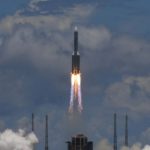