Heart of Darkness: Erdogan in Conclave with Zionist Lobby in NY

President Recep Tayyip Erdogan has met with Jewish American leaders and discussed Turkey-Israel relations in a meeting in New York on Thursday, as part of his visit to the U.S. to attend the 71st United Nations General Assembly according to a report in the Daily Sabah.

According to the report, Erdogan empasized the normalization of relations between Turkey and Israel is important to find solutions to economic and humanitarian problems experienced by Palestinians and told them about Turkey’s ongoing humanitarian aid efforts for Gaza.

Erdogan also highlighted that fact that a two-state solution and a state of Palestine with East Jerusalem as its capital was crticial in resolving the conflict in the country. In a speech to the UN General Assembly, Erdogan drew attention to the conflict.

“There is a need to allow for the Palestinian people to establish an independent Palestine with East Jerusalem as its capital, based on the two-state solution,” he told the UN General Assembly in New York. “It is an obligation of the international community toward the Palestinian children, if nothing else.”

He also said that Israel must respect the holy status of the Al-Aqsa Mosque for Muslims and stop violations against its status.

Deputy Prime Minister Veysi Kaynak, Minister of Energy and Natural Resources Berat Albayrak, Ambassador of the Republic of Turkey to the United States Serdar Kılıç, and Undersecretary of Foreign Affairs Feridun Sinirlioğlu were also present during the meeting.

Turkey and Israel relations deteriorated and very nearly broke off almost completely in 2010 after an Israeli naval attack on a Turkish flotilla, the Mavi Marmara, that was attempting to deliver aid to Gaza. The raid left 10 Turks dead with Israel expected this week to compensate families of Mavi Marmara victims.

Erdoğan is also scheduled to meet with Turkish non-governmental organizations and Muslim community leaders in the U.S. before his departure.

The Battle for Jerusalem: Turkey’s Erdogan Stakes His Claim 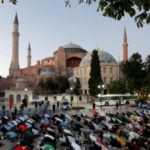 Converting Hagia Sophia for Domestic Consumption Will Backfire on Erdogan

Erdogan or Erdo-gone in Turkey?

Why's Anyone Shocked That Putin Listened to Erdogan and 'Stepped Aside' in Idlib?