In the aftermath of the U.S. attack on the Syrian army positions overlooking and commanding the Dier A-Zor airfield – the airfield, whose daily “Berlin air-bridge” style flights, are the sole lifeline to a city long besieged by ISIS – the Russian U.N. Ambassador asked a pertinent rhetorical question at the United Nations Security Council: Who is running U.S. policy: Is it the Pentagon or the White House?

There was no official response, of course, but one was not necessary: the New York Times editorial board gave us the answer in its verdict of Sept. 15:  Praising the U.S. Secretary of State for his energetic, but “quixotic” diplomacy, the “Board” wrote:

“The [Syria ceasefire] agreement also has powerful critics inside the Obama administration, including Defense Secretary Ashton Carter. On Tuesday, Pentagon officials refused to say whether they would comply with their part of the deal, which calls on the United States to share information with the Russians on Islamic State targets in Syria if the cease-fire holds for seven days. This would be an unusual and possibly risky collaboration with a Russian regime that has become increasingly adversarial and could profit from learning American military secrets.”

What is so surprising here is the non-surprise evinced by the editorial writers of the New York Times. The Board blandly states that the Defense Secretary and the Pentagon might not comply. Not a hint of surprise is evident at the constitutional implications of this open defiance of Presidential authority.

No, rather the Board seems to view it as quite natural and commendable that Carter should refuse to comply with this “unusual and risky” proposition. But this was not some “proposition for collaboration.” This was an agreed formal accord between the United States and another state – reached after lengthy negotiations, and done with Presidential mandate.

In brief, President Obama’s authority is no more – if it runs against the settled opinion of the Pentagon, the CIA, the New York Times, the Washington Post and of the Democratic Party’s Presidential candidate. It is not unreasonable therefore to assume that Obama’s grudging détente with a Russian President that he personally, viscerally dislikes, is now no more than diplomatic chatter.

Professor Stephen Cohen, the eminent Russia scholar, has pointed to the parallel when U.S. hardliners in the national security bureaucracy sank presidential attempts at détente with Russia. One such case was the CIA sending Gary Powers in his U2 spy plane over Russia, contrary to President Dwight Eisenhower’s agreement with Russia (subsequently only to be shot down by the Russians).

Cross-accusations are flying over who did what in Syria these last days, but what comes through is that Obama is facing likely insurmountable dissidence, even open disobedience, within his own Administration.

This Syrian “ceasefire” will not be recovered – not just for the bitter exchange of recriminations, which have irreversibly crossed certain unstated boundaries – but because, separately, we have a detailed and compelling account (from an American military insider) on How US Forces Sabotage White House Policy, Gone Disastrously Wrong with Covert Ops in Syria.

It is clear from this account that – what has long been suspected – is true: that the U.S. does not, and cannot, control the jihadi monster it has created, owing to warring disparate factions within the U.S. “‘security state,” turning a very blind eye to the nature and true intent of those it has been training, financing and arming.

In other words, Defense Secretary Ashton Carter and CIA Director John Brennan cannot deliver on the ceasefire, which may go to some way to explain the turmoil swirling around Washington. Did the White House fully comprehend how much the various U.S. “special” services were working at cross-purposes, and thereby undermining any real prospect of U.S. control, cutting away his negotiating stand?

The other aspect to this may be the nagging suspicion that Donald Trump has been given the space now to intervene with his “I told you so” – in terms of who “created” the jihadi “monster” – if he so chooses.

The “image” of concerted, wide, international will to resolve the Syrian conflict has been shattered – leaving only the splintered interests of diverse insurgent movements in Syria, and the polarized rhetoric of states outside. The Syria conflict most likely will enter a new, troubling phase – and with it too, Ukraine will probably become more intractable, as the two civil conflicts seem to be paired.

Noticeably, Ukrainian President Petro Poroshenko, who is playing “on-off-on” with the Europeans, will be in New York meeting with Hillary Clinton, whereas Donald Trump has declined to meet him. Are the Democrats planning to double-down with Poroshenko?

So where next?  Well, the Russian Duma elections have come and gone. They offered no surprises, but that does not mean that that they were without significance. With hindsight, we may conclude that they were more than just routine.

The party of the ruling authority, United Russia, won – albeit on a low turnout, but then Duma elections do not particularly stir imaginations among Russians. Putin is not strictly a member of U.R., but the party is directly associated with him. It is tied to him – and it won essentially on Putin’s popular coat-tails – and despite its poor economic record.

What was significant were two things: firstly, U.R. passed the 300-seat threshold.  With 343 seats in the 450-seat parliament, UR now has a “super majority.” It can now change the Russian constitution – and that is important. Secondly, the three pro-Western, liberal parties contesting the elections achieved only a combined total of 4 percent of votes cast. Individually, they achieved but only 1 to 2 percent.  And the threshold for entry by any one party into parliament is 5 percent. As Professor Cohen notes uncharacteristically bluntly: “The pro-western, liberal, political movement in Russia is dead – and was killed by Washington.”

In short, the economic sanctions and consequent belt-tightening resulting for Russians have not harmed Putin one jot. Russians blame the West (but still heartily dislike Prime Minister Dmitri Medvedev’s economic team). That is now clear to all.

So, President Putin is now in a position – with a Duma “super-majority” – to make changes. The rumors are that big changes indeed are in prospect. One well-known Russia commentator, suggests wryly that Putin’s real opposition lies not in the Duma, but in the “party of power” itself:

“The truth is, the real opposition to Putin is precisely that [of] the economic-financial ministers of the Medvedev government and all the factions which they represent: bankers, IMF-drones, corrupt businessmen from the 1990s who hate Putin because he does not allow them to steal like in the past, all the ex-Nomenklatura and their kids who made a killing in the 1990s and whose heart is in the West, the Atlantic Integrationists à la Kudrin who are basically ‘Washington consensus types’ and who hate the Russian people for voting for Putin.”

“That is the real opposition; and that opposition is far more dangerous than the US and NATO combined. And for that opposition the result of the [Duma] elections is a crushing defeat. Why? Because besides the hyper-official ‘power party’ United Russia, all the other parties in the Duma are far more anti-capitalist and anti-American than Putin. For the Empire, ‘United Russia’ is as good as it will ever get. Any alternative will be far, far worse.” So writes the Saker.

And here is the point: the situation in Syria for the coming months seems set to aggravate, but not to the point of a strategic defeat for Russia. Russia’s military intervention, and the shift by Turkey – though still not certain – makes it unlikely that the U.S. can achieve its sought-after “regime change.” In Ukraine, the “cards” are largely in Russian hands – and the Europeans understand this.

But in parallel to rising tensions in Syria and Ukraine and NATO build-up in the Baltics, the latest G20, by contrast, signalled the rising geo-strategic co-operation between Russia and China – and now the Duma elections promise Putin the possibility of making strategic shifts within Russia itself. Shifts in economic policy – almost certainly – but also Putin may feel more confident in his posture vis-à-vis the West.

This is not to say that Putin wishes to escalate tension versus the West. There is no evidence for that at all (as the deputy head of NATO has confirmed). But the Russian President no longer has to look over his shoulder – either. He can afford to wait out the West’s own economic and political crises.

Alastair Crooke is a former British diplomat who was a senior figure in British intelligence and in European Union diplomacy. He is the founder and director of the Conflicts Forum, which advocates for engagement between political Islam and the West.

US vilification of Russia began in earnest shortly after Moscow opened a military offensive against Islamic State forces in Syria, where the loathsome terrorist group, when not brandishing arms, was also running a profitable oil export business. Last year, Russia came under an avalanche of unsubstantiated accusations, declaring the Kremlin had interfered in the US… 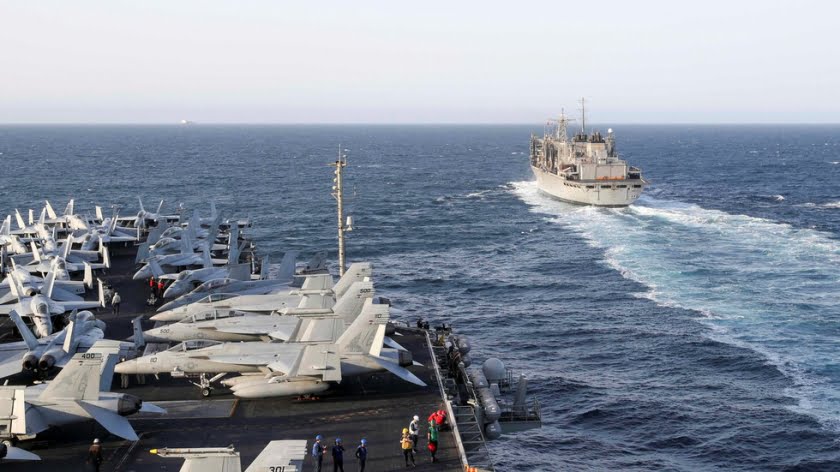 Yesterday, Russian President Vladimir Putin held one of his increasingly frequent phone calls with his Turkey counterpart Recep Tayyip Erdogan. Russia said the following of the phone call in an official statement, “Both sides expressed serious concern about the US decision to recognise Jerusalem as Israel’s capital and plans to move the US Embassy there from Tel Aviv. Such steps can thwart…