Satanism Triumphant in the West

Western society has become a satanic cult. Increasingly, our popular culture is the culture of a satanic cult, promoting satanic indoctrination.

People generally are unsure about how to behave. Many look to TV, movies and music videos for guidance. These have become increasingly pornographic because sexual depravity is the hallmark of Satanism. People have been taught to demand prurient satisfaction.

Up until roughly one hundred years, Christianity was the dominant zeitgeist. This was an ethos that saw mankind as a family devoted to the welfare and fulfillment of all of its members based on the belief that our soul is Divine.

In order to destroy this ethos, Satanists started World War One and ensured that the gratuitous devastation would thoroughly demoralize humanity. I wouldn’t be surprised if the sinking of the Titanic had a similar purpose. As Ben Hecht wrote, Western Civilization had its legs cut out from underneath it by World War One.

Because of Satanist control of education and mass media, few people have noticed that this pernicious zeitgeist has been directing “social change” ever since. The Satanist Zeitgeist is the same as Communism, “a system which makes one a tool in its hand–virtually a slave.” (George Solomon, Among the Red Autocrats, 1935, p.5)

The Satanists have been able to disguise this agenda as rational and natural “social progress“. However, the aim has been to destroy everything wholesome and positive in society based on its Christian heritage. This is because, unknown to most Jews and Freemasons, Cabalist Judaism is a satanic cult whose aim is to enslave and exploit mankind. Unless there is a drastic change-of-course, we are headed for a Third World War.

An Orwellian world-slave-state with a greatly reduced population will emerge from its radioactive ashes.

In January 2015, I posted an article listing Ten Signs Western Society is a Satanic Cult. The trends identified have only grown. Here I proffer more anecdotal evidence of how the Satanist Zeitgeist permeates society. Remember this zeitgeist is all about wrestling humanity from God’s purpose and reducing it to the level of squalor. This requires that all values are inverted: evil is good, ugly is beauty, weak is strong, truth is false, unnatural is natural, sick is healthy, hate is love, insane is sane, etc..

M/F gender is universal throughout nature and fundamental to the survival of every species. Throughout history, cultures have cultivated these gender differences for the benefit of all. In their attempt to enslave society, the Cabalists have waged a war on gender that includes the mainstreaming of feminism and homosexuality. Now that gay marriage is acceptable, they are trying to erase the concept of innate gender altogether by saying you are whatever you identify with, regardless of biology. This attack extends to bathroom privacy. New laws will make it a “human right” to be genderless and punish those who refuse to acknowledge this status. The Cabalists are responsible for 100 million deaths in the last century. Do you really think they care about the “rights” of a handful of disturbed people? This is a psychological on society. A satanic cult controls and exploits people by making them sick.
The vast majority apparently have no “rights.”

According to Dr. Radio, overweight patients are now accusing doctors of “fat-shaming” if the MD’s recommend their patients lose some weight. Cabala is all about empowering dysfunction and sickness.

A church in my city has erected an impressive “memorial garden” on its front step for a longtime panhandler who passed away. “Ye who have no money shall come and eat” (Isaiah 55) it says on the monument. Can you imagine if they erected such a monument to someone who actually did God’s work?? But that’s not what churches do anymore. Religion is nothing more than pious, self-serving appearance of concern for the unfortunate. The Communist Broadcasting Corporation (CBC) here in Canada is all about sickness and the downtrodden. They never show the strong and healthy. There are never any positive examples.

Never in my lifetime has their been a presidential candidate more obviously sinister than Hillary Clinton. With the help of the msm, she has normalized deceit and corruption. She is rumoured to be a pedophile and a satanist high priestess. Yet the Cabalist establishment is determined to elect her, and millions of Americans are signalling their loyalty to the cult by voting for her.

The chicanery and cynicism in Western foreign policy also seems unprecedented. The devastation continues in Syria, Iraq and Ukraine. They have convinced us that war is normal. War is the expansion of the central banker plantation. Russia appears to be resisting this expansion but this could simply be a pretext for the next big one.

Communism is Satanism is Cabalist Judaism. Society is taking on the characteristics of this satanic cult. In addition to the above, we see the social regimentation implied by “political correctness” which is nothing but satanic conformity. In a cult, people who deviate are subject to slander, smear,physical intimidation and loss of livelihood. This is happening now. What happened to respect for the individual and love of freedom? We are approaching the day when making the true distinction between good and evil will be considered “hate.” 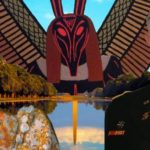 In Military Service to the US and… Satan

Why is Western Society Toxic?

The Rise Of Satanism