Julian Assange cautioned all of us a while back, in the vein of revelations similar to those provided by Edward Snowden, that Google — the insidious search engine with a reputation for powering humanity’s research — plays the dark hand role in furthering U.S. imperialism and foreign policy agendas.

Now, as the Wikileaks founder faces days of questioning by a Swedish special prosecutor over rape allegations inside his Ecuadorian Embassy haven in London today — and particularly in wake of the presidential election — Assange’s warning Google “is not what it seems” must be revisited.

Under intense scrutiny by the U.S. State Department for several controversial Wikileaks’ publications of leaked documents in 2011, Assange first met Google Executive Chairman, then-CEO, Eric Schmidt, who approached the political refugee under the premise of a new book. Schmidt, whose worth Forbes estimates exceeds $11 billion, partnered with Council on Foreign Relations and State Department veteran, Jared Cohen, for the work, tentatively titled The Empire of the Mind — and asked Assange for an interview.

Later acknowledging naïvte in agreeing to meet the pair of tech heavyweights, Assange found afterward how enmeshed in and integral to U.S. global agendas Schmidt and Cohen had become.

In fact, both have exhibited quite the fascination with technology’s role in burgeoning revolutions — including, but not-at-all limited to, the Arab Spring. Schmidt created a position for  Cohen in 2009, originally called Google Ideas, now Google Jigsaw, and the two began weaving the company’s importance to the United States into narratives in articles, political donations, and through Cohen’s former roles at the State Department.

That same year, Schmidt and Cohen co-authored an article for the CFR journal Foreign Affairs, which, seven years hence, appears a rather prescient discussion of Google’s self-importance in governmental affairs. Under the subheading “COALITIONS OF THE CONNECTED,” they wrote [all emphasis added]:

“In an era when the power of the individual and the group grows daily, those governments that ride the technological wave will clearly be best positioned to assert their influence and bring others into their orbits. And those that do not will find themselves at odds with their citizens.

“Democratic states that have built coalitions of their militaries have the capacity to do the same with their connection technologies. […] they offer a new way to exercise the duty to protect citizens around the world who are abused by their governments or barred from voicing their opinions.”

Perhaps appearing laudable on its surface — at least to some degree — as Assange pointed out, there is a self-mischaracterization by the American and other Western governments and inaccurately-monikered ‘non-governmental organizations’ that their interests in other nations’ affairs are innately good.

This cult of government and non-government insiders have a firm belief their goals should be the unassailable, unquestionable motivator for American imperialism — whatever the U.S. thinks best as a “benevolent superpower,” so should the rest of the ‘non-evil’ world.

“They will tell you that open-mindedness is a virtue, but all perspectives that challenge the exceptionalist drive at the heart of American foreign policy will remain invisible to them,” Assange wrote in When Google Met Wikileaks. “This is the impenetrable banality of ‘don’t be evil.’ They believe that they are doing good. And that is a problem.”

Cohen, an Adjunct Senior Fellow at the notorious Council on Foreign Relations, lists his expertise in “terrorism; radicalization; impact of connection technologies on 21st century statecraft; Iran,” and has worked for both Condoleezza Rice and Hillary Clinton at the Department of State. Fortune, calling Cohen a “fascinating fellow,” noted that, in his book Children of Jihad, the young diplomat and technology enthusiast “advocates for the use of technology for social upheaval in the Middle East and elsewhere.”

Under the auspices of discussing technological aspects at Wikileaks’ disposal for the upcoming book, Schmidt; Cohen; Lisa Shields, a CFR vice president at the time; and Scott Malcomson — who would shortly afterward be appointed Rice’s lead speech advisor for her role as the U.S. ambassador to the United Nations — descended on Assange’s safe haven in Norfolk, outside London.

It wasn’t until weeks and months after this gathering Assange fully realized how closely Google operates in tandem with the government of the United States — and how perilous the innocent mask of its public intentions truly is in light of such cooperation.

“Cohen’s directorate appeared to cross over from public relations and ‘corporate responsibility’ work into active corporate intervention in foreign affairs at a level that is normally reserved for states. Jared Cohen could be wryly named Google’s ‘director of regime change.’ According to the emails, he was trying to plant his fingerprints on some of the major historical events in the contemporary Middle East. He could be placed in Egypt during the revolution, meeting with Wael Ghonim, the Google employee whose arrest and imprisonment hours later would make him a PR-friendly symbol of the uprising in the Western press. Meetings had been planned in Palestine and Turkey, both of which—claimed Stratfor emails—were killed by the senior Google leadership as too risky. Only a few months before he met with me, Cohen was planning a trip to the edge of Iran in Azerbaijan to ‘engage the Iranian communities closer to the border,’ as part of Google Ideas’ project on repressive societies.”

However, most significantly, Stratfor vice president for intelligence Fred Burton, also a former official with the State Department, wrote in one of those emails:

“Google is getting WH [White House] and State Dept support and air cover. In reality they are doing things the CIA cannot do . . . [Cohen] is going to get himself kidnapped or killed. Might be the best thing to happen to expose Google’s covert role in foaming up-risings, to be blunt. The US Gov’t can then disavow knowledge and Google is left holding the shit-bag.”

Of course, the massive company — its various facets now under the umbrella of Alphabet, Inc. — has never been fully absent government involvement. Research for what would become ultimately become Google had been undertaken by company founders Larry Page and Sergey Brin in cooperation with the Defense Advanced Research Projects Agency (DARPA) — the strictly secretive technological testing and planning arm for the Department of Defense.

Indeed Google’s continued coziness with the diplomacy, military, and intelligence wings of the United States government should not be, though perpetually are, ignored.

Political establishment bulldogs on both sides of the aisle and their cheerleader corporate media presstitutes will continue for months or years to debate the failed presidential bid of Hillary Clinton and the apparently-shocking rise and election of Donald Trump, but technology played a starring role in those events. Several reports last year cautioned Google’s algorithms could swing the election — and not only the American election, but national elections around the globe.

“We estimate, based on win margins in national elections around the world,” said Robert Epstein, a psychologist with the American Institute for Behavioral Research and Technology and author of one of the studies, “that Google could determine the outcome of upwards of 25 percent of all national elections.”

Considering lines between the tech giant and the government have essentially been abandoned, this revelation puts power and influence into acute, if not terrifying, perspective.

“Your insights as a key member of the Defense Industrial Base are valuable to ensure ESF’s efforts have measurable impact.”

According to the Department of Homeland Security, the Defense Industrial Base is “the worldwide industrial complex that enables research and development, as well as design, production, delivery, and maintenance of military weapons systems, subsystems, and components or parts, to meet U.S. military requirements .”

It also provides “products and services that are essential to mobilize, deploy, and sustain military operations.”

Although Schmidt and Cohen ultimately watered down their book title The Empire of the Mind into the more palatable and less blatantly imperialistic, The New Digital Age: Reshaping the Future of People, Nations, and Business, its message amounted to self-congratulatory justification for broader foreign policy goals. Nefarious warmonger Henry Kissinger, for one, praised the work, which included telling lines by the Google execs, such as:

“What Lockheed Martin was to the twentieth century, technology and cyber-security companies will be to the twenty-first.”

So ubiquitous has Google become, its presence — like similarly U.S. government-connected Facebook — is nearly indispensable in the daily lives of hundreds of millions worldwide.

However well-known is the government intelligence framework in such platforms, it would be ill-advised to ignore the far darker Machiavellian aspects of private corporate technology’s intersection with global political agendas — and the force that coalition wields around the planet.

Whether or not the American establishment’s empire suffered a blow in the election of Donald Trump will be a debatable point for some time, but it’s a veritable guarantee its cogs — seeing themselves as the planet’s saviors — have planned in advance for just such an occasion.

“If the future of the internet is to be Google,” Assange noted, “that should be of serious concern to people all over the world—in Latin America, East and Southeast Asia, the Indian subcontinent, the Middle East, sub-Saharan Africa, the former Soviet Union, and even in Europe—for whom the internet embodies the promise of an alternative to US cultural, economic, and strategic hegemony.”

Empire will remain empire until its dying breath — particularly if it functions under the obstinate belief it, alone, can save the world. Julian Assange should be praised for the transparency and insight he and Wikileaks have readily given the world, instead of excoriated and blamed for faults which lie in the establishment framework — it is this political, intelligence, and military web deserving of a pointed finger. 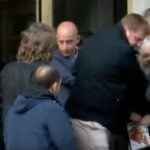 Did This Happen in the Home of the Magna Carta?
Technology
GoogleJulian Assange