Deepest Water Found 1000km Down, a Third of Way to Earth’s Core

JULES VERNE’s idea of an ocean deep below the surface in Journey to the Centre of the Earth may not have been too far off. Earth’s mantle may contain many oceans’ worth of water – with the deepest 1000 kilometres down.

“If it wasn’t down there, we would all be submerged,” says Steve Jacobsen at Northwestern University in Evanston, Illinois, whose team made the discovery. “This implies a bigger reservoir of water on the planet than previously thought.”

This water is much deeper than any seen before, at a third of the way to the edge of Earth’s core. Its presence was indicated by a diamond spat out 90 million years ago by a volcano near the São Luíz river in Juina, Brazil.

The diamond has an imperfection – a sealed-off inclusion – that contains minerals that became trapped during the diamond’s formation. When the researchers took a closer look at it with infrared microscopy, they saw unmistakable evidence of the presence of hydroxyl ions, which normally come from water. They were everywhere, says Jacobsen.

To work out the depth the diamond formed at – and hence the origins of this water – the team again turned to the inclusion. It is made of a ferropericlase mineral, which is composed of iron and magnesium oxide, and can also absorb other metals such as chromium, aluminium and titanium at ultra-high temperatures and pressures typical of the lower mantle.

“This water is much deeper than ever found before, at a third of the way to the edge of Earth’s core”

Jacobsen found that these additional metals had separated from the ferropericlase – something that happens in the milder conditions a diamond experiences as it edges up through shallower depths. But for the metals to be present at all, the diamond must have originated in the intense conditions of the lower mantle (Lithos, doi.org/btcn). “Based on the composition of the trapped mineral, we speculate that the depth was around 1000 kilometres,” says Jacobsen.

The clincher is that as the inclusion was trapped in the diamond the whole time, the water signature can only have come from the diamond’s place of formation in the lower mantle. “This is the deepest evidence for water recycling on the planet,” he says. “The big take-home message is that the water cycle on Earth is bigger than we ever thought, extending into the deep mantle.”

His team has previously found evidence of massive amounts of water some 600 kilometres down, mixed in with rock.

“Water clearly has a role in plate tectonics, and we didn’t know before how deep these effects could reach,” he says. “It has implications for the origin of water on the planet.” For example, it is possible that Earth had water from day one in the very dust and rocks that first formed it.

But it’s still not clear exactly how water got so far down. It may have arrived in the mantle even earlier than 90 million years ago, through sedimentary oceanic crust burrowing downwards as primitive tectonic plates thrust against and past each other.

The new study suggests cycling of subducted material, even at these depths, says Lydia Hallis at the University of Glasgow, UK. “Ultimately, this research will help us better understand the way our planet recycles itself.”

Jacobsen thinks that this water may help explain why Earth is the only planet we know to have plate tectonics. “Water mixes with ocean crust and gets subducted at convergent plate boundaries,” he says. “Introducing water into the mantle promotes melting and weakens rock, likely helping out the motions of plates like grease.”

The hope is that such research will yield insights into how our oceans and atmosphere formed in the first place. 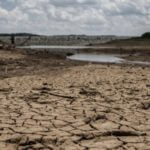 The New “Water Barons”: Wall Street Mega-Banks are Buying up the World’s Water

These Bottled Water Brands are LOADED with THOUSANDS of Plastic Particles: Is Your Favorite on the List?