Chinese strategists suggest that the country’s focus on the Atlantic has been insufficient.

One of the unintended consequences of pushing hard against Chinese claims in the South China Sea and the East China Sea (including Taiwan) is that these contested zones have given major impetus to China’s growing maritime ethos. What was once a rather far-fetched and controversial idea—the notion that China might build an aircraft carrier—has now morphed over time into the ultimate symbol of China’s re-rise. Now the only question is when the People’s Liberation Army Navy will have something that looks less like a Russian “starter” carrier and more like a Nimitz-class nuclear carrier with all the trimmings.

Perhaps this was inevitable, but there have been influential Chinese skeptics, who argued that rapid naval expansion would only antagonize the leading naval powers and, moreover, that the resources would be better spent on education, poverty alleviation and the like. So much for that quaint idea. In fact, Beijing is following quite closely in Washington’s footsteps: first build the fleet and then later figure out what it might be good for. That is not to say that China is fated to open thousands of bases around the world and adopt an interventionist military policy that has its armed forces fighting in many countries simultaneously with no end in sight. Fortunately, that outcome still seems very unlikely for China’s defense policy, but then Beijing, like Washington, has an active and growing camp of hawks. It has long been noted that one of China’s most widely published strategists, Liu Mingfu, advocates for China to match (or surpass) the United States in military capability. That logic, when combined with China’s naval modernization and reef-building enterprises, has Washington’s China hawks buzzing with excitement. This article is unlikely to dampen their giddy mood. Yes, some Chinese strategists are promoting a Chinese Atlantic Maritime Strategy [中国大西洋海洋战略] but this is not yet an official (public) policy vector, the concept is not decidedly militarized at this point, and only the barest outlines can be discerned at this early and uncertain stage. This article of interest was published in a late 2016 edition of the official State Oceanic Administration publication, Ocean Development and Management [海洋开发与管理].

The analysis begins with the rather simple premise that China’s wider field of global interests necessitates that “China must increase… power projection capabilities.” [中国必须… 提升力量投送能力] A “strong maritime power,” after all, must have a “global maritime strategy.” The Atlantic is described as a “super strategic ocean” [超级战略大洋] and the “core strategic position” [核心战略地位] on the globe. The authors lament that in the past, China has not paid adequate attention to the “world’s strategic center—focus on the Atlantic has been insufficient.” Revealing a distinct threat perception, the analysis also candidly says that Beijing must enter the Atlantic to “break the American maritime blockade and develop China’s maritime ‘external line.’” [打破美国海洋封锁, 发展中国海洋‘外线战略’] This research team states unequivocally that Washington announced the rebalance to the Asia-Pacific in 2010 in order to preserve its leading position in the global order and to “contain China’s rise.” [遏制中国崛起]. “Against the efforts of the U.S. and its allies at encirclement, leaning to the West, opening up Atlantic markets and creating cooperative relationships with Atlantic coastal states… has become an effective method to counter U.S. hegemonism.”

However, it would be a misreading to label this Chinese study as an anti-American harangue. Much of the second half of the paper is devoted to discussing the importance of nonmilitary or soft-power instruments with a clear emphasis on avoiding antagonizing Washington. Explaining that U.S.-China maritime rivalry is “an obvious trend,” the authors underline that China “must in these circumstances seek to maintain the overall stability of the relationship with the United States.”

As with most Chinese foreign-policy endeavors, there is a strong commercial impetus behind this focus on the Atlantic area. Indeed, the piece observes that the “endpoints” [终点] of China’s ambitious “One Belt, One Road” initiative [一带一路] are “all in the Atlantic,” so its Atlantic strategy will logically have an enormous impact on future economic development. According to this strategy, China should accelerate cooperation with European states, especially the United Kingdom, France and Germany. More extensive trading relationships with American East Coast ports should also be a priority, according to this analysis, because such commercial ties increase “mutual interdependence” that serves as the “ballast” [压舱石] for the critical U.S.-China relationship. Then, the authors also emphasize the “huge latent potential” of increased trade with African and Latin American countries in the Atlantic area. For example, increased energy trade between China and these countries could allow Beijing to “decrease its level of dependence on the Middle East”—a strategic economic imperative for China that will sound all too familiar to American readers.

However, an even stronger theme in the paper is the need to enhance China’s scientific endeavors in the Atlantic. Indeed, the introduction to this research article suggests the imperative to develop an Atlantic strategy is given greater impetus by the 2016 passing in Beijing of a new law on undersea resources, the so-called deep-sea law [深海法]. The piece cites more than forty ocean expeditions for deep ocean floor expeditions and suggests that China must do more to prepare for “the peaceful exploitation of Atlantic deep sea resources.” These Chinese researchers explain that China already has a kind of scientific presence in the Atlantic [有一定的存在], but that scientific understanding of the Atlantic in China is still quite lacking. Given the “ever more severe” crisis of global warming, the authors argue that it is quite appropriate for China to collect scientific data in the Atlantic and that this is part of China’s “global responsibility” [国际责任]. One could almost be completely relaxed about this were it not for a later passage when the authors recommend avoiding military steps in favor of “ocean exploration for the public welfare”, in part because this “generally will not raise the suspicions of the international press.”

In an interesting conclusion to the study, the research team observes that China missed out [错过] on the age of discovery, missed out on the age of great navigation and missed out on the opportunity to become a great maritime power. Hence, there is now a perceived need to catch up, evidently. As discussed above, much of the paper is devoted to scientific discovery, expanding economic opportunities and projecting “maritime soft power” [海上软实力], for example relying on China’s now ample, blue water coast guard forces. Nevertheless, at the conclusion of the essay, the goal is again articulated of “putting greater pressure on the U.S.” [对美国形成更大的压力], causing Washington to have misgivings regarding alleged interference in the problems in China’s neighboring sea areas.

Of course, Beijing has every right to explore, trade extensively and operate with military forces in the Atlantic. Wise leaders in Washington and elsewhere in the West should react with maturity and caution in evaluating such developments. One may reasonably speculate that early manifestations of these plans could be the prospect for a logistics-support facility in Namibia or a more extensive defense partnership linking Beijing and Buenos Aires. Taking the issue a few steps further, countries like the United Kingdom may be more hesitant to throw their weight around in East Asia if they know their homeland could be targeted rather easily in the not-too-distant future by long-range cruise missiles launched from Chinese submarines in the Atlantic.

For Washington, the troubling shadow cast by these developments is the implication for future decades that a U.S.-China military conflict, were that dark prophesy to become a reality, could mean global war rather than yet another “dustup” in a faraway place. At some level, it seems to this observer that Beijing may be laying the groundwork to try to educate Washington regarding the meaning of “core interest.” Let’s all hope it does not come to that.

No one ever lost money betting on the Pentagon refraining from exceptionalist rhetoric. Once again the current Pentagon supremo, certified neocon Ash Carter, did not disappoint at the Shangri-La Dialogue – the annual, must-go regional security forum in Singapore attended by top defense ministers, scholars and business executives from across Asia. Context is key. The… 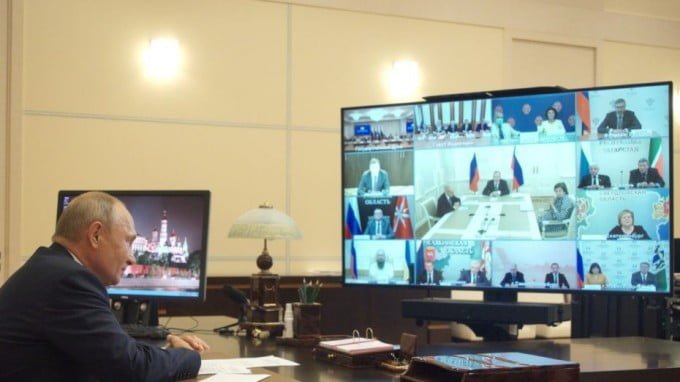 Despite what American and European commentators may think, there really is a deep desire among people to vote for their own sovereignty. And that impulse was on full display last week with the announcement of the results of Russia’s public vote to approve the changes to its constitution. The final tally put the vote at…

At the end of August, a meeting of Muslim clerics and scholars convened in the Chechen capital of Grozny to forge a consensus on the subject of ‘who constitutes a Sunni.’ Sunnism, the 200 or so Sunni clerics from Egypt, South Africa, India, Europe, Turkey, Jordan, Yemen, Russia warned, “has undergone a dangerous deformation in…