Dustin Pfundheller, 30, an American dentist living in Singapore, was set to become the youngest person to visit every country in the world while in a full-time job. His globetrotting has taken him to 192 of the 193 recognised states, bringing his medical skills to the world’s remotest places. But in January he was barred for the second time from Israel, the only country left on his list, having previously been refused entry last year.

Despite an invitation to a dental conference in Tel Aviv, and Israelis who vouched for him, border officials banned Pfundheller for 10 years. No reason was given, but lawyers suspect visits to Iran and the Arab states sealed his fate. There could hardly be starker evidence that Israel stubbornly refuses to become a normal country.

The reality could not be more different. Arabs and Muslims have always struggled to gain entry to Israel. Palestinians are routinely abused at the borders, and thousands, especially from Jerusalem, have been stripped of the right to return home after living abroad.

But new figures show Israel is excluding other groups too. Entry denials have increased nine-fold in the past five years, topping 16,000 people last year. Among those increasingly turned away are political activists. Israel controls all access to the occupied Palestinian territories, and now regularly denies entry to solidarity activists and those who support the boycott movement.

But in practice the net is cast wider still. Last week Israel denied a tourist visa to Human Rights Watch’s new director for Israel and Palestine, having earlier refused him a work permit. One of the most prominent human rights organisations in the world was dismissed as an outlet for “Palestinian propaganda”.

Weeks earlier, Israel subjected Jennifer Gorovitz, an American Jewish vice-president of the New Israel Fund, to a humiliating interrogation at airport arrivals. NIF is one of the largest funders of Israeli organisations supporting human rights and social justice. That includes assistance to groups that monitor military abuses in the occupied territories. This presumably explains why Gorovitz’s interrogators suggested she posed a “security threat”. She finally gained admittance only after Talia Sasson, the Israeli head of NIF and an adviser to former prime ministers, pulled strings.

Gorovitz wrote of her experience: “My privilege as a Jew means I never imagined that Israel could or would deny me entrance.”

Such an assumption was justified. Israel’s Law of Return is supposed to guarantee Jews around the world the right to almost instant citizenship in Israel.

For that reason, the law is grossly unjust. It privileges Jewish access to Israel at the expense of the native Palestinian population, most of whom were expelled in 1948.

Nonetheless, it is noteworthy that Israel, a state that invested itself with the historical mission of offering sanctuary to Jews worldwide, is increasingly applying a political test to those who arrive at its borders. Israel is denying entry not only to Arabs and would-be record breakers. And it is deporting not just those such as migrant workers and African asylum seekers who might pollute the Jewish state with non-Jewish genes. Now it is openly targeting Jews whose politics do not align with the far-right government of Netanyahu.

It should be noted that many of the solidarity and boycott activists turned away are Jewish. Famous Jewish critics of Israel such as Noam Chomsky and Norman Finkelstein have been barred too.

In Israel’s eyes, it seems some Jews are more equal than others.

The pulling up of the drawbridge comes as Israel’s leadership has remained largely silent in the face of a rising tide of anti-semitism in the US, fuelled by Donald Trump’s election as president. Dozens of Jewish centres have received bomb threats, and Jewish cemeteries have been vandalised.

There are growing rumblings among American Jews that their interests are being overlooked by the Netanyahu government to avoid damaging relations with the new US administration. But another reason for the lack of response should be considered.

The principle of the “ingathering of the exiles”, according to Israel’s official ideology, Zionism, assumes that Israel is the rightful home of Jews everywhere. And the largest Jewish population outside Israel resides in the US.

But will Israel’s arms really be open to all Jews equally, or only to those willing to contribute enthusiastically to the tribal project?

And can Jews of conscience ignore the true cost of their migration? They can leave behind anti-Jewish bigotry in the US, but only if they bolster the Jewish bigots of Israel who lord it over the native Palestinian population. 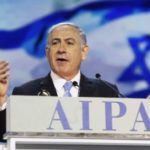 Netanyahu Is Back Yet Again
Opinion
IsraelNetanyahu