Buckle up for Currency Wars

The likelihood of serious geopolitical conflict is increasing, current levels of debt across the developed world are unsustainable, and the real probability of currency wars to retain perceived global share may well and truly pop several chains of imploding bubbles. Buckle up

Russia has been home to many prophets, seers, healers and mystics such as Helen Blavatsky, George Gurdjieff, Matrona of Moscow, and Wolf Messing among others. Some have lasted through the tests of time, some not. Among the mosaic of Russian people who have delved into the future, one man in particular rose from obscurity like a meteor, barely made his mark among the economists of the world, and then was killed.

His works were lost in the dust of time, only to re-emerge stronger more than 30 years after his death. He was no mystic, yet his work with time, markets, waves and conclusions rank with the best.

Nikolai Dmitriyevich Kondratieff, (4 March 1892 – 17 September 1938) was a Russian economist, who was a fan of the New Economic Policy (NEP), which promoted small private, free market enterprises in the Soviet Union. He is best known for proposing the theory that economies have long-term (50 – 60 year) cycles of boom followed by depression. These business cycles are today called “Kondratieff waves” and are part of any commodity or equity trader’s base education.

Sadly, his career came to an untimely end when shot during the Stalin purges in 1938 and his works largely lost to the world until the 1970s. Who knows how we would be seeing and judging the economic landscape these past 50 years if he were around to argue cycles with John Maynard Keynes and the now dominant Keynesian world view.

After a few decades, the expected return on investment falls below the interest rate and people refuse to invest, even as overcapacity in capital goods gives rise to job layoffs that reduce consumer activity. Unemployment and a long economic crisis follow as economies contract. People and companies husband resources until renewed confidence returns and there is an upswing into a new capital formation time, usually characterized by significant investment in new technologies.

Today’s stock market rise is given energy through the easy monetary policies of the global central banks. Barring a small period of optimism between 2005 and 2007, the market has witnessed an undercurrent of anxiety, impending gloom, and heightened geopolitical tension. It may be safe to say that the current historically high equity numbers are accompanied by significant unease and fear – the anxiety quotient.

The mood of investors has been underlined with disbelief that despite all the many ongoing efforts of the central banks, QE, and capped rates they have not been successful in preventing the onset of Kondratieff’s “winter” waves.

We are entering the final phase of Kondratieff’s projected winter cycle (2016 – 2021) which will more likely than not be a significantly stressful period. Global economic activity and work demographics have passed their peak, geopolitical conflict risks are increasing, current levels of debt across the developed world are unsustainable, and the real probability of currency wars to retain perceived global share may well and truly pop several chains of imploding bubbles.

While not a popular theme among go-to economists, it may very well be that gold will again re-emerge as the safest place to park ones assets until the “winter wave” passes over us and crashes on the shore.

Cycles tend to repeat giving us some broad insight into general trends of the future so that planning can be profitably acted on. The more the central banks meddle and attempt to control natural market forces, the more forceful is the markets blowback.

Correction, possibly severe, will ultimately happen as surely as the sunrises in the east. Nothing mystical about it, just hard numbers crunched with the help of Mr. Kondratieff. 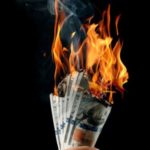 Neoliberalism Has Met Its Match in China. We’re in a Trade and Currency War

The Gold Standard is Sanctions Proof

The Birth of a Monster: The Federal Reserve