Stop the Smear Campaign (and Genocide) Against Sunni Islam!

Eric Zeusse’s work is invariably thought-provoking, well-researched, and far more credible than most mainstream reporting. Unfortunately, in his otherwise excellent article “All ‘Islamic Terrorism’ Is Perpetrated by Fundamentalist Sunnis, Except Terrorism Against Israel,” Zeusse commits two grave errors. The result is a grotesque calumny against Sunni Islam.

Zeusse’s first error is to label the alleged perpetrators of 54 high-profile terrorist events, and their private and state sponsors, “fundamentalist Sunnis.” Both words in this expression are incorrect.

The word “fundamentalist,” deriving from the 19th-century “fundamentals of belief” movement, describes Protestant Christians who subscribe to a literal reading of scripture. There is no comparable movement in Islam. All Muslims, from the most radically esoteric Sufis to the most hidebound obscurantist Wahhabis, read the Qur’an literally and accept it as the literal word of God. (Esotericist Muslims, and to a lesser degree all Muslims, also read their scripture allegorically, but do not dispense with the literal reading in doing so.)

Christian fundamentalism is a reaction against the 19th-century “death of God” in Western post-Christian societies, and the accompanying decline of religion, especially in the public sphere. Muslim societies have experienced no such decline of religion. In the Islamic world, God is very much alive, and always has been, so there is nothing for any alleged Muslim “fundamentalism” to react against. The alleged perpetrators of 9/11, Bali, Madrid, 7/7, the Boston bombings, Charlie Hebdo, and so on cannot be described as fundamentalists, since there is no such thing as Islamic fundamentalism.

Nor can they be accurately described as Sunnis. To the extent that any school or tendency in Islamic thought can be connected to the alleged terror perpetrators, it is Wahhabism, which is very different from Sunni Islam. Most educated Sunni Muslims, including the majority of religious scholars, view Wahhabism as a marginal sect that can arguably be classified as a form of neo-Kharajism, meaning it is outside of Sunni Islam. (Kharajism was a sect of holier-than-thou purists who left the mainstream Islamic fold during the period of leadership controversies following the death of the Prophet of Islam.)

Wahhabis have a history of rejecting mainstream Sunni Islamic scholarship and massacring Muslims with whom they disagree. Originally a small, insignificant sect of desert bandits, they were armed and funded by the British Empire, and later the American Empire, as a weapon against mainstream Islam. Without this imperial backing, and the oil money it brought, Wahhabism would not even exist today. Wahhabism is best viewed as the artificially-sustained pseudo-religious ideology of Western mercenaries fighting against Islam and Muslims. And since almost 90% of Muslims are Sunni, it is Sunnis who are the primary targets of this ongoing war. Indeed, the vast majority of the victims of the kind of terrorism Zeusse is talking about are Sunni Muslims.

Zeusse’s second mistake is even more grave, and far more offensive. Publishing in Global Research, an outlet that has featured extensive investigative work showing that 9/11 and its follow-up events have been false flags, Zeusse nonetheless takes it for granted that the “Muslim” patsies blamed for these events are actually the “terrorists.” This false narrative has triggered the murder of 32 million Muslims, five million by direct violence and 27 million by deprivation, according to Gideon Polya, an expert on preventable mortality. By endorsing the genocidally mendacious cover stories of the 9/11-triggered series of false flags, Zeusse is making himself an accessory to the murder of 32 million people.

The facts of 9/11 have long been available to anyone willing to look at them, beginning with the obvious controlled demolitions of WTC-7 and the Twin Towers. Every aspect of the official story has been falsified.

The official narrative claims “radical Muslims hijacked planes and crashed them into buildings, which caused the Towers and WTC-7 to collapse from fire.”

“Radical Muslims”? The alleged terrorists were not even practicing Muslims, much less extremists. Hebrew-speaking coke fiend Mohammad Atta’s favorite food was pork chops, according to his pink-haired stripper girlfriend Amanda Keller. Atta and other “hijackers” indulged in gambling junkets to Las Vegas and Jack Abramoff’s casino boats, never went near a mosque, and got drunk and left an alcohol-soaked Qur’an on the bar the night before 9/11. Evidence suggests some if not all of the alleged hijackers were impersonated by intelligence agents. For details see Daniel Hopsicker’s Welcome to Terrorland and Jay Kolar’s “What We Now Know About the Alleged 9/11 Hijackers” in Paul Zarembka’s The Hidden History of 9/11.

“Hijackers”? There is no evidence that any Muslims (or anyone else) manually hijacked any planes on 9/11, and abundant evidence that no such thing happened. David Ray Griffin’s excellent article “Was America Attacked by Muslims on 9/11?” provides a good summary of the evidence. Those seeking more information should read Elias Davidsson’s work including Hijacking America’s Mind on 9/11, then move on to Dr. Griffin’s dozen or so books on the subject.

“Plane crashes?” The claim that all four 757 and 767 passenger airliners crashed at the advertised locations is highly debatable. Pilots for 9/11 Truth has provided abundant evidence against that hypothesis.

“The Twin Towers and WTC-7 collapsed from office fires?” This ridiculous lie has been thoroughly demolished by Architects and Engineers for 9/11 Truth. But you don’t need special expertise to see that WTC-7 was imploded — and that the Towers did not collapse, they exploded.

Yet Eric Zuesse would have us believe that “fundamentalist Sunni Muslims” committed the atrocities in New York and Washington. How can Global Research, edited by people who know better, publish such an obscene calumny?

Though I have investigated fewer than 20 of the 54 supposed “Sunni fundamentalist” terror events listed by Eric Zeusse, my conclusion that these were all likely or confirmed false flags suggests that most if not all of the others were also false flags.

My three edited books We Are Not Charlie Hebdo, ANOTHER French False Flag, and Orlando False Flag feature 55 leading public intellectuals deconstructing the myth of Islamic terror as it relates to these and several other recent false flag events. Here is a selection from my essay “Pre- and Post-9/11 False Flags” in We Are NOT Charlie Hebdo:

After a hiatus lasting most of the decade, the false flag of Islamic terror was re-hoisted in the USA following the Fort Hood shootings of November 2009. (Technically this event cannot be classified under the terrorism rubric since the victims were soldiers, not civilians.) American historian and terror analyst Webster Tarpley writes that the Fort Hood massacre attributed to Major Nidal Hasan unleashed “an articulated campaign of media hysteria and mass manipulation.” Tarpley went on to question the official story of the shootings by citing reports of multiple shooters, adding: “There remains the question of whether Major Hasan’s psychosis has been artificially produced through a program of brainwashing and heavy-duty ‘Clockwork Orange’ psychological manipulation.” That question would re-emerge in 2014 in connection to another likely Manchurian Candidate terrorist, the leader of Islamic State and self-proclaimed Caliph Abu Bakr al-Baghdadi.

If the Fort Hood shooting was tragic, the follow-up incident involving a so-called underwear bomber was pure farce. While the American people were told that a terrorist named Umar Farouk Abdulmutallab had packed his underwear full of plastic explosives in hope of blowing up a jetliner, they were not told that Abdulmutallab did not have a detonator—and that plastic explosives cannot explode without a detonator. Worse, eyewitnesses saw Abdulmutallab boarding the Detroit-bound plane in Amsterdam without a passport, escorted by a “sharply-dressed man” who appeared to be some sort of security agent. A cameraman on board the plane was clearly complicit in the attack, beginning to film shortly before the attack began, and panning seamlessly to capture the entire episode as if on cue. Passenger and eyewitness Kurt Haskell, a Detroit attorney, has published convincing evidence that the whole affair was a poorly-disguised false flag operation. ABC News reported Haskell’s courtroom testimony: “I am convinced that Umar was given an intentionally defective bomb by a U.S. agent to stage a false terrorist attack.”

A subsequent headline-garnering reminder of the alleged Islamic terror threat was the Times Square bombing attempt of May 1st, 2010. Like the underwear bombing incident, the Times Square scare involved an utterly incompetent terrorist patsy and a so-called bomb that was highly unlikely to explode. According to former US intelligence insider Gordon Duff, editor of Veterans Today, the fake attack was “part of a CIA false flag against Pakistan.”

The next major American myth-maintenance operation was the Boston Marathon bombing of April 2013. If anything, this alleged Islamic terror incident was an even more crushingly obvious false flag than its predecessors. Photographs taken at the scene show that the exploded backpack the FBI claims held a bomb was not worn by either Tsarnaev brother, but instead by an unknown man wearing a cap with insignia of Craft International, a Blackwater-style outfit owned by “American Sniper” Chris Kyle specializing in mercenary mayhem whose motto is “Sometimes violence does solve problems.” Craft and the officials who hired them hid from the media and refused to either deny or explain the mercenaries’ presence at the Marathon. Video taken at the scene reveals apparently staged carnage complete with theatrical pseudo-amputations of artificial limbs and poorly-distributed amounts of cinematic fake blood. The FBI murdered a key witness, Ibrahim Todashev, execution style while he was in custody. The Tsarnaevs’ uncle Ruslan Tsarnaevwas married to Samantha Fuller, daughter of controversial CIA agent Graham Fuller, until 2004. Graham Fuller has allegedly been implicated in a number of scandals including the Iran-Contra affair and the creation of al-Qaeda. He provided support to Chechens fighting against Russia. Fuller has advocated “guiding the evolution of Islam” and has been called the CIA controller for the ethnic Turkish USA-based Fethullah Gulen organization which controls over $20 billion in assets and has been accused of trying to overthrow the government of Turkey. While in Turkey in May 2011 I met with Turkish journalists who said Fuller, who headed the CIA station in that country in September 2001, threatened them shortly after the attacks, telling them not to question the official story of 9/11 in print.

The above is just a small sample of the evidence that most or all high-profile “Islamic terror” acts in the West, and a great many in the rest of the world, are directed by Gladio B – a NATO program, steered mainly by assets of Israel, to create a wave of false flag terror blamed on Muslims in service to the “clash of civilizations.” What we are seeing, then, is not “Sunni fundamentalist terror,” as Eric Zeusse would have it. Instead, we are seeing a false-flag genocide campaign AGAINST Sunni Islam and Sunni Muslims, who make up the near-totality of the 32 million people murdered as a result of 9/11 and its follow-up false flag operations.

Eric Zeusse owes Sunni Muslims – especially the family and friends of the 32 million people murdered by the Big Lie that Zeusse swallows and promulgates – a monumental apology. 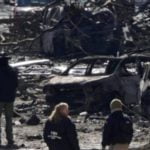 Iran is Once Again Under Terrorist Attack
Opinion
IslamSunniTerrorism