US Gets Increasingly Isolated Internationally

Economic sanctions are an instrument of coercion used to make one state comply with another’s wishes. The United States is by far the largest implementer of economic sanctions in the world. It is virtually the only country that imposes unilateral sanctions, certainly the only one that does so with any regularity. The US has imposed more sanctions than the other countries/entities put together. Washington sees restrictions as a low-cost method to accomplish foreign policy goals, despite the fact that the measures affect common people. The policy damages international relations and backfires exacting a high price in terms of lost jobs and trade opportunities.

The US sanctions policy came under sharp criticism in the United Nations. Addressing the UN General Assembly on October 18, United Nations Human Rights Council’s Special Rapporteur Idriss Jazairy said “Damaging a country’s economy with sanctions usually leads to violations of the rights of ordinary people. Sanctions are disruptive for any State, and can have a particularly devastating impact on the citizens of developing countries when they impair the economy.” He expressed concern about sanctions which had an impact outside the territory being targeted. “It is well established that sanctions which apply to parties outside of the dispute are illegal, but sanctions which lead to human rights violations also create an obligation on the imposing state to take measures to repair the harm they have caused,” the expert noted.

Reporting on his visit to Russia in April, Jazairy said sanctions had not achieved the desired effect but had damaged others. “It appears that sanctions have not changed Russia’s position, but instead have caused economic losses for agricultural producers in both the EU and Russia,” he noted, adding “Serious, credible dialogue and negotiations are needed to resolve political issues, without creating additional harm for farmers.”

Jazairy urged the UN member states to adopt a Declaration on Unilateral Coercive Measures and the Rule of Law, which would set out shared principles on the use of sanctions and international law, renewing the call for a registry of sanctions, to bring greater transparency to the practice. “A registry would allow States, civil society and any other interested parties to know at all times what sanctions are in place, helping companies to conduct their businesses, and ensuring the sanctions meet human rights standards,” he said.

In his report (A/HRC/33/48) issued in September, the rapporteur urged the Human Rights Council and the UN General Assembly, through a solemn Declaration, to reaffirm “the right of victims to an effective remedy, including appropriate and effective financial compensation, in all situations where their human rights are affected by unilateral coercive measures.” The report also highlighted the importance of setting up a consolidated central register within the UN system of all the international sanctions in force, adding that these findings should be made public. This mechanism, which would enhance transparency and accountability, could draw on the model of the United Nations Register of Conventional Arms set up in 1991.

A new research by the Austrian Institute of Economic Research (WIFO) suggests the EU’s economic sanctions against Russia introduced three years ago have cost European countries billions of euros. The survey, which was conducted at the request of the European Parliament, and published on October 6, showed that the EU has lost €30bn due to sanctions.

Unilateral sanctions are increasingly ineffective in a more globalized economy. The United States has imposed many different sanctions against Russia but there are many more nations ready to boost economic cooperation with Moscow. The US has got a reputation for imposing economic sanctions liberally to make other nations reluctant to do business with it. European leaders and much of the rest of the world view economic sanctions as counterproductive and generally favor them only in extraordinary circumstances, such as war. In July, France’s foreign ministry said new US penalties against Iran, Russia appeared at odds with international law due to their extra-territorial reach

From a legal point of view, only the UN Security Council has the right to impose sanctions against a state. Unilateral coercive measures violate the spirit and letter of the UN Charter, in particular its preamble and Articles 1 and 2. The organization rests on the principle of equality of all its member states. A state can resort to sanctions for self-defense purposes but Russia did not attack the United States. Thus, the United States is destroying the integrity of international organizations and agreements to which it is a party.

For instance, the policy of sanctions runs counter to the WTO fundamental principle of trade free of discrimination, which envisages respect for market principles and honest competition. Parties should maintain government restraints on the movement of goods at a minimum, and if changed, the restraints should be reduced, not increased. The conditions of trade, including the level of tariffs and other, must be discussed and agreed on within a multilateral framework.

In theory, a state complaint procedure of the UN Human Rights committee could be launched according to Article 41 of the International Covenant on Civil and Political Rights – that way the UN would have to deal with the matter. The US has recently announced its intent to drop out from the United Nations Human Rights Council. This month it left UNESCO. No surprise as the idea to leave the United Nations has been floating in the US for some time. In January, 2017, Alabama congressman Mike Rogers sponsored the American Sovereignty Restoration Act of 2017, referred to the House, which calls to leave the United Nations. Utah state representative Don Bush, has claimed that many programs by the supranational entity have violated the US Constitution, such as the implementation of the International Court of Justice and the Law of the Sea Treaty, both of which the United States does not currently endorse. Much has been said in the United States about Russia’s international isolation. In practice, the United States, not Russia, is getting increasingly isolated internationally. 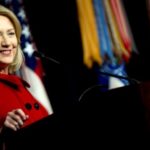 How Exceptional America Is

Is Trump Using the JCPOA to Break the UN Before it Breaks Him? 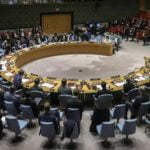 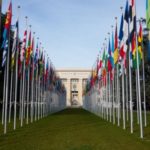 New Malthusianism and the Misanthrope Dynasties