Russia said the following of the phone call in an official statement,

“Both sides expressed serious concern about the US decision to recognise Jerusalem as Israel’s capital and plans to move the US Embassy there from Tel Aviv. Such steps can thwart all prospects for the Middle East peace process.

Further escalation of tensions in the region, it was noted, would be unacceptable. The efforts of the international community should be aimed at facilitating the resumption of Palestinian-Israeli talks in search of a compromise solution to all issues, including the status of Jerusalem.

Russia and Turkey reaffirmed their commitment to achieving a just and viable solution to the Middle East crisis based, above all, on the relevant resolutions of the UN Security Council and the UN General Assembly, as well as the realisation of the Palestinian people’s right to their own state.

Recep Tayyip Erdogan informed President Putin about the calling of an emergency summit of the Organisation of Islamic Cooperation devoted to this situation on December 13.

Topical aspects of bilateral cooperation were addressed, with special attention given to carrying out strategic energy projects.

Erdogan has thus far taken a major lead on condemning Donald Trump’s controversial move to recognise Jerusalem/Al-Quds as an Israeli capital. He previously stated he would consider breaking off diplomatic relations with Tel Aviv in such an instance. This would mean that the first major Muslim majority country to have diplomatic relations with Tel Aviv, would effectively be joining the wider Arab and pan-Muslim boycott of Tel Aviv.

During the phone call, it is almost certain that Putin called for calm but that he also conveyed his deep understanding of Turkey and the wider region’s position, which is one of shock, rage and profound disturbance, in respect of Trump’s capital adventure.

On Monday, Putin will arrive in Cairo for talks with Egyptian President Abdel Fattah el-Sis. This comes as Syria and Lebanon’s resistance party Hezbollah have strongly condemned Trump’s move while even Egypt and America’s traditional Arab allies in the Persian Gulf have joined with their opponent Iran to condemn the move. The EU, major Orthodox Churches, Vatican and global Muslim leaders have also expressed their condemnation as have the French President and German Foreign Minister. China too expressed its grave concerns in a statement from the Foreign Ministry in Beijing.

No state, not the US, Russia nor China can start nor stop the Palestinians from inaugurating a Third Intifada (uprising) against occupation. With Palestinians declaring a Day of Rage on the 8th of December, many fear that regime troops could respond with violence and other disproportional measures as they have in the past.

The question therefore is, what can Putin or any prominent statesmen do in light of Trump’s decision?

The answer is that someone like President Putin can do something the US President did not and perhaps could not do: he can listen. Trump only listened to Tel Aviv when making the decision, including to Benjamin Netanyahu whom Trump has often described as a personal friend.

As Trump held phone calls with Persident Abbas of Palestine, President Sisi of Egypt and the Kings of Jordan and Saudi Arabia, it is clear that he did not listen to the words of caution from Washington’s contemporary Middle Eastern partners, who have all condemned the move very publicly.

Moreover, the fact that Trump did not consult the Turkish President, given Turkey’s traditional good relations with Washington and Erdogan’s continued emphasis on the issue of Palestine, Ankara will see this as a double-insult at a time when Turkey-US relations are already at an all time low.

By contrast, Putin has already spoken to President Abbas, President Erdogan and will soon meet face to face with the President of the largest Arab state, Egypt.

If the wider Arab world along with regional Muslim majority countries like Turkey and Russia’s partner Iran, can facilitate a united or semi-united diplomatic response, one that may well be quietly coordinated by Russia which remains a genuinely neutral superpower in the Israel-Palestine conflict, there could be hope for some future re-start of the peace process which Palestinian leaders have openly stated that Trump has killed.

Alternatively, perhaps Russia and her partners in the Middle East could begin to build the trusting bonds necessary to instigate a new and more meaningful peace process where the US has conspicuously failed to do so over a long period of time.

Donald Trump’s controversial decision merely slammed shut the door to peace that previous US leaders had been slowly pushing shut for decades. The danger is that more Palestinians will lose their lives in the aftermath of the US move and this is a very real and very tragic reality.

However, in the longer term, if Russia can replace the US as the de-facto mediator in future Middle East peace talks, as Moscow already has in respect of Syria, there could be slightly more hope for the future.

It is a mighty task which the US is clearly not interested in. Perhaps a more diplomatic superpower can take its place over the long-term?

U.S. Is Pushing for a New Provocation Against Serbia over the Kosovo Issue

Is there a Way to Avoid an Escalation of Armed Violence in Libya?

The Battle for Iraq is Intensifying

What Happened —and Didn’t Happen— at the Israel-Lebanon Border? 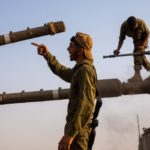 Will Hezbollah Seek Revenge Against Israel?