An allegedly unsuccessful test of a North Korean ballistic missile that exploded over a densely populated area has raised concerns about the possibility of similar accidents happening over the country’s capital Pyongyang or other populated areas, The Diplomat has reported.

The Hwasong-12/KN17 intermediate-range ballistic missile reportedly failed minutes after it was launched on April 29, 2017 and crashed in the North Korean city of Tokchon with a population of about 240,000, causing “considerable damage to a complex of industrial or agricultural buildings,” the Tokyo-based international news magazine wrote, citing a source in the US government with knowledge of North Korean weapons programs.

According to The Diplomat, the missile never flew higher than 70 kilometers as its first stage engines shut down just minutes into the flight.

Because the missile had consumed only a fraction of its liquid fuel, it is likely that the facility at Tokchon experienced a large explosion upon impact.

Still, since the accident happened during non-working hours, it is believed that it resulted in few, if any, casualties on the ground.

Liquid-fuel missiles like the Hwasong-12, which use a highly volatile combination of hypergolic propellant and oxidizers, can produce massive explosions depending on the exact nature of their failure.

In February 2017, North Korea successfully fired a booster rocket in what was seen by the world as a ballistic missile test, resulting in a new series of sanctions imposed upon Pyongyang by the UN Security Council.

North Korea has since conducted a flurry of nuclear and ballistic missile tests ramping up tensions on the divided Korean Peninsula.

In the war of words that followed, North Korean leader Kim Jong-un threatened to launch a missile strike on the US with President Donald Trump then responding in kind, saying that he did not rule a military solution to the conflict. 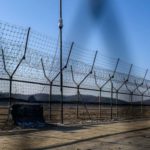