Under the Radar: Large-Scale War Looms in Africa to Involve Many Actors

Tensions between Cairo and Addis Ababa have risen recently to set alarm bells ringing. Ministers from Ethiopia and Egypt met on Dec.26 in an attempt to resolve a dispute over the Construction of Grand Ethiopian Renaissance Dam (GERD). Once more the nations failed to reach an agreement on the burning problem.

The issue of the Nile generated a great deal of friction between the two countries in recent months. The dam is 63 % complete to become the biggest hydro-electric plant in Africa. The cost is nearing $5-billion – about 10% of Ethiopia’s GDP. 86 percent of the volume of Nile water originates from Ethiopia. The Nile provides over 90 per cent of Egypt’s water supply. It already receives the lion’s share of the Nile waters more than 55 billion of the around 88 billion cubic meters of water that flow down the river each year.

Cairo fears the dam construction will cut into its water supply, destroying parts of its precious farmland and squeezing its population of 94 million people, who already face water shortages. It believes that the dam would allow Ethiopia to control downstream Egypt’s access to this resource and thus place it in a strategically vulnerable position.

Another source of disagreement is whether Ethiopia should be allowed to complete construction of the dam before the negotiations over ensuring water flows have finished. Egyptian officials say this would violate an agreement signed by all three countries in 2015 meant to ensure diplomatic cooperation. Egypt, which is almost totally reliant on the Nile for irrigation and drinking water, says it has “historic rights” to the Nile, guaranteed by treaties from 1929 and 1959. Cairo argues that the treaties grant it 87 percent of the river’s flow, as well as the power to veto upstream projects.

Egypt, Ethiopia and Sudan have yet to approve a May report on the social and environmental impacts of the dam’s construction on downstream countries Sudan and Egypt. Sudan realigns towards Ethiopia in this dispute and does it more broadly in a larger One Belt One Road context. “It’s high time Egypt pays what it owes and for Sudan to get its full share,” said Ibrahim Ghandour, Sudanese Foreign Minister, in late November to make Egyptian media accuse Sudan of siding with Ethiopia on its row over the Nile.

The Nile’s basin covers eleven countries: Tanzania and Uganda, Rwanda, Burundi, the Democratic Republic of Congo, Kenya, Ethiopia, Eritrea, South Sudan, Sudan and Egypt. The countries that share the river have been divided by the dispute over its waters for decades. Many times it has been predicted that the disagreements could eventually lead to an armed conflict. Tanzania, Kenia, Ruanda and Uganda and Burundi support Ethiopia pinning their hopes on cheap energy to be available after the dam is operational. Many other countries are also involved in the dispute.

This simmering situation is much bigger than its trilateral format would suggest because it’s taken on contours of the “Gulf Cold War”.Secretary-General of the Arab League Ahmed Aboul Gheit, an Egyptian diplomat, transmitted a warning from the league to Ethiopia during the opening session of the fourth Arab Water Forum Nov. 26, saying, “Water security for Egypt — the biggest Arab country in terms of population — is part and parcel of the Arab national security.” Saudi Prince Khalid bin Sultan, the honorary president of the Arab Water Council, called for holding a water summit to face water piracy and terrorism. “Water terrorism is as dangerous as any other kind of terrorism. We have to be armed with all methods to fight it” he said emphasizing that a force is needed to prevent water extortion.

Egypt wants to establish an international coalition for the downstream countries harmed by the dam projects conducted by upstream countries. The measure was proposed during the Arab Water Forum, which was organized by the Arab Water Council and held in Cairo on Nov. 26-28, under the umbrella of the Arab League. The construction of the Ethiopian dam is supported by Qatar – one of the reasons Egypt joined the Saudi Arabia-led group of states that declared a boycott against Doha.

So, the “Gulf Cold War” is expanding to the Horn of Africa as a Saudi Arabia- and UAE-aligned Egypt opposes a Qatar-backed Ethiopia, with the dam dispute used as a pretext for expanding influence into the region. Egypt, an ally of Gulf Cooperation Council (GCC) states, realizes that it will forever remain dependent on Ethiopia to boost the influence of Qatar. Cairo believes Doha supports the Muslim Brotherhood that threatens the current Egyptian government. Egypt, Saudi Arabia and the Emirates could use Eritrea as a launching pad for organizing destabilization efforts against Ethiopia. Indeed, a potential conflict may start a big fire to dwarf the conflicts in Syria and Yemen.

Egypt has demonstrated its preparedness to go to war on a number of occasions. In the 1970s Ethiopia tried to establish projects in the Blue Nile without consultation with other fluvial states. Back then the Egyptian air force now has the capability to strike the dam at a distance of up to 1,500 kilometres, following the purchase of 24 Rafale fighter jets from France. The dam site is completely surrounded by Ethiopian anti-aircraft batteries ready for any attacking fighter jets.

In 2013, Egyptian politicians inadvertently discussed sabotaging the dam in a live broadcast on state-owned television. In April, Sudanese newspapers quoted members of an Eritrean opposition group who suggested that Egypt had made a secret deal to open a new naval base on Nora Island in the Red Sea off the coast of Eritrea, Ethiopia’s northern neighbor. The move has angered Addis Ababa, even though Egyptian military has denied it.

Ethiopia has invested into the project too much to roll it back. Egypt believes too much is at stake to make it take a tough stand opposing the construction. It will go to any length to prevent its completion. Diplomacy does not work. The possibility of conflict is high. Only urgent mediation from outside can prevent the worst. On Dec. 26, Egyptian Foreign Minister Sameh Shoukry suggested to Ethiopia and Sudan that they all call in international experts to help settle the dispute. It provides some hope but it takes two to tango. The other side has not welcomed the initiative, at least not yet. While Syria, Iran and North Korea keep on grabbing headlines, dangerous conflicts may rather unexpectedly break out in Africa. 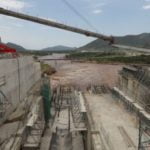 Conflict Looms for Egypt and Ethiopia Over Nile Dam

Political Issues of the Blue Nile

Ethiopia’s Disinterest in Dam Negotiations Can Ignite War with Egypt