In the Eastern Ghouta in Syria, a war is fought every day without the exclusion of blows: it is the war of information and propaganda, which is consumed by tweets and photographic material on social networks. Objective: to bring public opinion to its own side, at any cost and by any means. The sources that much of the Western information has used to describe what has been happening in recent weeks are the same as those of the 2016 Battle of Aleppo: the Syrian Human Rights Observatory guided by the dissident Rami Abdel Rahman based in London, the controversial White Helmets, the notorious humanitarian NGO founded by James Le Mesurier and, above all, a dense network of “activists” and “reporter” who declare themselves independent.

What we have undertaken is a journey into this conflict, where children become an extraordinary propaganda tool, able to leverage the emotional side: after all, with the advent of the internet and the new social media, indignation has become a formidable tool and to be effective it must be channeled in a precise and well-determined direction – in this case aimed at demonstrating that “Assad bombards and kills his own people” and to discredit the allies Russia and Iran.

That the war is terrible and brutal there is no doubt but the truth that we want to tell you is another thing, and it is much more complex and sophisticated. To tell you about it, we wore the role of a “rebel” activist, entering the wide and widespread social network that fights against the Syrian government of Assad with photos, movies and hashtags.

Among the first we spoke with is Alaa Al-Ahmad, quoted by the Guardian on 7 February. In his biography on Twitter he describes himself as “a Syrian journalist” of the Eastern Ghouta and contributor to the Damascus Media Center, “an information platform that covers social, military and political events in Syria fairly”. To our precise question, however, he himself confirms the presence of three Islamist groups widely financed from abroad in Eastern Ghouta: al-Rahman Corps, Army of Islam (or Jaysh al-Islam) and Ahrar al-Sham, three organizations Salafis who aim to create a Caliphate in Syria in which to apply the Islamic Shari’a law.

We are talking about the same Islamist organizations that, as Matteo Carnieletto and Gian Micalessin told on “Gli Occhi della Guerra!, have bombed the Syrian capital, leaving many dead, including many children.

Al-Ahmad shares the statements of Arhar-al Sham on social media and turns to Europe for military intervention against Assad:

“My message goes to France to whom I want to remember that we are human and we are not just figures. We have the right to choose who governs Syria. This killer Bashar al-Assad kills us before the eyes of the international community and kills us with internationally forbidden weapons,” he tells us.

No answer when we ask him what his real relations are with the three Salafist groups he mentioned. Here’s how Syrian rebels manipulate information in East Ghouta.

Just like in Aleppo and with the same modalities of Bana al-Abed, also in the information war of Ghouta a children’s role plays a fundamental role as a propaganda weapon in order to convey information in a single direction and in support of the narration of Islamist rebels. They have launched the hashtag #SaveGhouta, they are very young and document the horrors of the war every day with videos and videos. They are the little ones Noor and Alaa and Muhammad Najem. Accounts created only a few months but have already reached hundreds of thousands of people around the world. Including numerous clearly false profiles.

To manage these accounts are followed by family members or activists close to the Islamist opposition. As reported by Middle East Eye, in fact, “children are helped by family members and opposition activists”. Shams Alkhateeb is an English teacher and is the mother of Noor and Ala. Also according to Middle East Eye, it is she who manages her son’s account, documenting daily what is happening in the suburbs of Damascus. He claims to have decided to open a Twitter account “to show the world what is happening inside the Eastern Ghouta: nothing in the world can prevent us from publishing and we hope to document our suffering on Twitter”.

On the identity of Shams Alkhateeb, however, there are no news or certainties, and the family’s connection with the three jihadist groups present in the rebel enclave is not known. Among the profiles followed by Noor and Ala there are numerous journalists, members of the Syrian opposition, the White Helmets and Lina Shamy, the reporter-activist close to Al-Qaeda who documented the battle of Aleppo Est from the sacks controlled by the rebels. 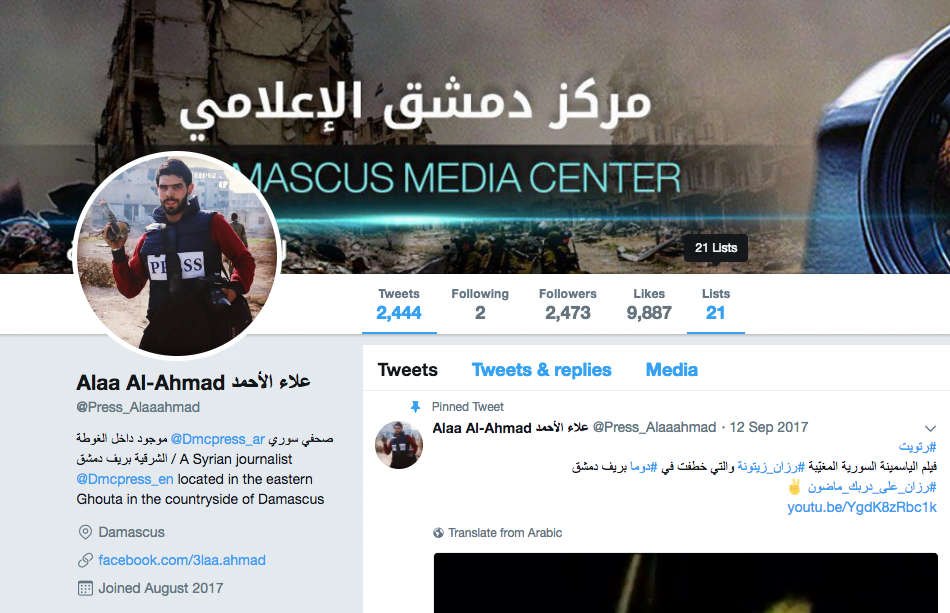 Who really manages the profile of 10 thousand followers of 15-year-old Muhammad Najem, who has been on Twitter since last December, is not aware of it, since he never answered our questions. Alaa Al-Ahmad confirms, however, that

“Muhammad Najem is fine, he is my friend but now he is in the shelter and has no internet”.

We know he’s lying to us, because the young Syrian’s tweets are very frequent and daily. What strikes us about the mysterious Najem is his special interest in the events of international politics and the internal facts of the United States, quite peculiar for a Syrian boy who lives under the bombs and in a bunker without internet, water and food.

On February 17, for example, Muhammad Najem’s profile put a “like” on a New York Times article on the 13 Russians indicted in the Russiagate investigation; February 13 showed another appreciation for a Political article titled “Here’s how the white nationalists fooled the media on the Florida shooting”. Who is behind Muhammed Najem? To date, it remains a mystery. What is certain is that in the war of propaganda nothing is as it seems and the truth is hidden in depth.