Drums Along the Potomac

The amateur psychologist in me suspects that the more the USA heaps Russia with censorious opprobrium and punishments, the closer this floundering polity actually is to completely losing its shit. Friday morning’s front-page headline in The New York Times appears to have been written by Pee Wee Herman: 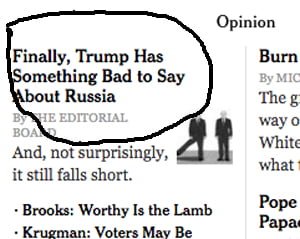 I can just hear Vlad Putin blowing a raspberry out of the Kremlin: “Nyah, nyah, nyah… I know you are, but what am I…?” We’re also informed today by that august journal that U.S. Accuses Russia in Cyberattacks on Power Plants. (Oh, wait a second, they changed the headline at 8:02 to Russia Wormed Its Way Into Access at Power Plants, U.S. Says.) Hmmmm… well, the amateur detective in me suspects that A) this is exactly the kind of bullshit that US intel excels at making up; plus B) the public was actually told last year that our intel has the ability to place any kind of cyber-footprint and time-stamp it wants on digital information, so that C) this assertion can be neither proved nor disproved.

The amateur international relations analyst in me sees in these shenanigans a desperate search for a casus belli, an excuse to go to war. But that only brings me back to amateur psychology: the US apparently wants to commit suicide. Wouldn’t war be a great idea a week after Russia announced it had new hypersonic missiles that the US can’t defend itself against? Hmmmm. Maybe the Russians made that shit up. And maybe they didn’t. Perhaps we’d like to test that, say, by bombing a bunch of Russian military personnel in Syria, just to see what happens.

There is also the matter of the poisoning in Salisbury, UK, of the Russian Sergei Skripal and his daughter Yulia with a suspected nerve toxin, Novichok, first developed by the old Soviet military. The two remain in critical condition. A nasty bit of business. Skripal was a Russian-to-British double agent who was exchanged some years back in one of the infrequent swaps of captured intel “assets” by the so-called great powers. British Prime Minister Theresa May had a whack attack over the Skripal hit, reeling out new sanctions and booting a boat-load of Russian diplomats off-island.

Forgive me for seeming callous, but it’s a little hard, in the first place, to give a fuck one way or the other about the poor Skripals. Being a double agent carries some serious occupational hazards. This is generally understood among observers older than age six. Mr. Skripal came to an unhappy fate, and his daughter is apparently what we like to call collateral damage — of the sort, say, when one of our drones in a foreign land blows up a wedding party by some targeting error. Whoops! Our bad. One lesson here is that people with ambitions in the intel sector should consider sticking with one side or the other.

Interestingly, and secondarily, the accusation itself is unaccompanied by evidence. The Brits will not release samples of this Novichok for analysis. But are we also to believe that the Brits (or one of their close allies, say) could not concoct a bit of this poison themselves in a lab? After all, when you’re in the world of double-agentry, you’re in a hall of mirrors, and who, really, is to be trusted? Least of all in a matter such as this, would you start banging war drums.

But that, alas, is where things rest for the moment. War drums beating and war cries wafting across America’s spacious skies. The hysteria is palpable and we are making ourselves ridiculous — if not getting ready to blow up the world. Oh, I might also add that it is impossible to believe that there is not some room in the giant NSA facilities full of computer jocks trying sedulously to worm their way into every computer system in every foreign land the world over. The question you’d have to ask is: why would we not be doing that?

The amateur theologian in me thinks: when the Shining City is at hand, will someone please hitch Rachel Maddow to the back bumper of a Toyota Landcruiser and drag her over six miles of broken lightbulbs? Of course, I can’t say that because it would by misogynistic.

The New World is Emerging Before Us
Opinion
RussiaUKUS