Yup, he said “mission accomplished“, “perfectly executed” and that he was “so proud” of his “great military“. 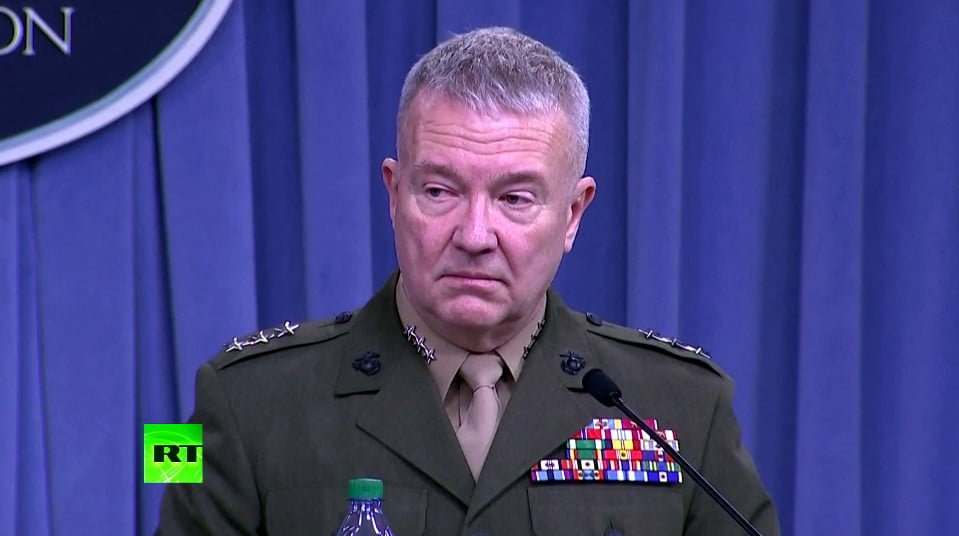 Called the strikes “Precise, overwhelming and effective” (does he also look like an alcoholic to you?)

Finally, and this is weird, there is no evidence of the French doing anything at all (go figure?). Oh, speaking of the French, it appears that they warned the Russians about what would happen. So, technically speaking, the US generals are being truthful when they say that they did not warn the Russian but just “deconflict”. The French did all the warning for them.

As for that pathetic scorecard, the Pentagon “spokesperson” said that they had noticed a 2000% increase of “Russian troll” activity over the past 24 hours.

I would think that completely destroying a non-existing Syria chemical warfare capability could even be called a “infinite success”.

Let’s wait for further details (a lot of pro-Syrian outlets did exaggerate the number of missiles shot down) but it appears that the AngloZionist went for the “least bad” option in terms of risk for our planet: a symbolic and completely useless “pretend strike”. And for that I am personally grateful. Let’s hope that, at least for a while, they need to establish their “indispensableness” will be satisfied.

I also think that the Russians need to dramatically increase both the speed and the magnitude of the delivery of their air defense systems to the Syrians. One Russian general remarked this morning that they were considering delivering S-300s to the Syrian. I guess that is better a case of better late than never. But the one system most needed are Pantsirs. The Russians need to built then on an emergency 24/7 schedule and deliver as many and as fast as possible as they are much better suited for the kind of tasks (cruise missile point defense) than the much larger S-300s.

One more thing: all this pathetic Disney-like show is a shame and a disgrace. The USA as truly sunk to the level of the kind of degeneracy shown by Brezhnev in his last years or by Eltsin. Frankly, I think that Trump is even more of a buffoon than these two. What a disgrace!

[Sidebar: as for those bitching about Trump being as bad as Hillary, this is both true and false. Inherently yes, of course, he is. And he is far dumber than her. But getting him in the White House bought Russia (and Syria) about 1 year of time to prepare for what happened yesterday. So, no matter how sub-pathetic Trump is, keeping the Neocons away from power for a year or so bought some very precious time for the rest of the planet. That is a good thing even if Trump himself is a maniacal coward, a narcissistic piece of shit and dangerous buffoon of the worst kind]

Also, I want to comment on one more thing. Even the two arch-villains of our official historiography, that would be Hitler and Stalin, compare favorably to Trump in terms of a) actually using diplomacy and b) trying to build alliances. Yes, I know, both Hitler and Stalin did use force (and even false flags!), but force was ONE of the the tools in their international relations toolkit. At least both Hitler were capable of negotiations and the building of alliances. The clowns in the White House can’t even do that.

Yes, sorry if that offends anybody, but US Presidents have now sunk even lower than Hitler, Stalin, Brezhnev or Eltsin.

So ask yourself: what awaits them and their regime in the future?

By The Saker
Source: The Vineyard of the Saker
(Visited 24 times, 1 visits today)

Why the US Deep State Won’t Forgive Russia and Iran