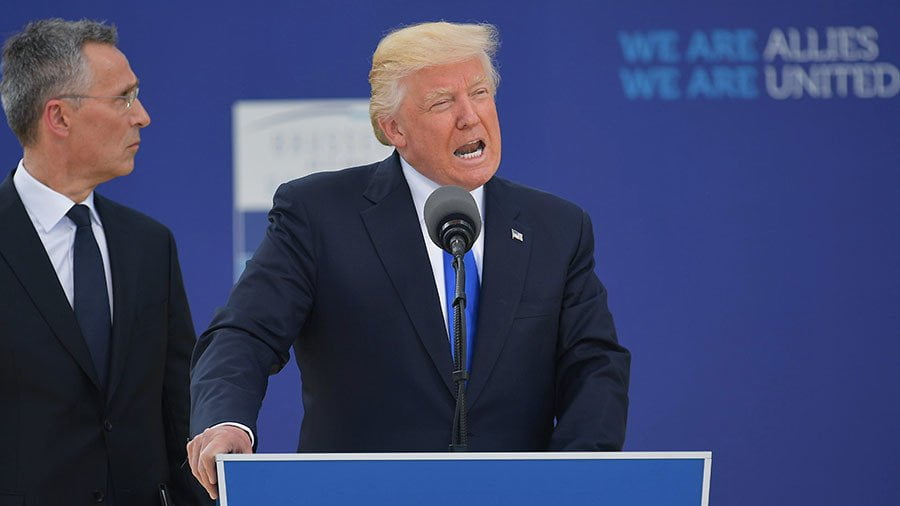 The growing rift in the transatlantic alliance is set to blow wide open after US President Trump used a top-level meeting with NATO this week to blast Germany and other European members for being “disloyal”.

Sounding like a Mafia don, Trump warned that such NATO members “will be dealt with”.

Speaking in the Oval Office, along with NATO Secretary General Jens Stoltenberg, Trump resorted to his usual gripe about “unfair burden sharing” of military spending in the alliance. The US president has long rebuked other NATO members for not meeting the alliance’s spending target of 2 per cent of national economic growth.

Turning to former Norwegian Prime Minister Stoltenberg, Trump said with menacing tone: “I think you will be able to handle the ones that aren’t [spending enough], right?”

But Trump raised the rankle stakes even higher by insisting that NATO members which are lagging in their purported annual contribution are “not loyal”.

Praising seven members of NATO that do reach the 2 per cent military spending target – he named Poland, Romania, Lithuania, Latvia, Estonia, Greece and Britain – Trump said: “Some countries are loyal, some countries aren’t.”

In particular, the president turned his ire on Germany for what he claimed was a “long-standing shortfall” in financial contribution to NATO. But it was what Trump said next that gave his tirade against Berlin and other “low spending” NATO members a sinister edge.

“In addition to that, they’re [Germany] buying massive amounts of gas from Russia. Paying billions and billions of dollars. Something we will discuss.”

Think about that. NATO has been intensifying warnings of Russia as a security threat to Europe. It has recently upped the ante by implementing a policy of “Enhanced Forward Presence” whereby increased NATO deployments along Russia’s western frontier are taking on a more offensive capability.

In this anti-Russia outlook, NATO is fully reflecting what the Trump administration has been articulating in several policy papers, labeling Russia, along with China, as a greater threat than terrorism.

In short, Russia is an enemy, despite Trump’s contradictions over Russiagate and his oft-stated desire to “get along with Russia”.

So, if Russia is the enemy, what does that say about Germany “buying massive amounts of gas” from Russia?

This refers, of course, to the Nord Stream project of Gazprom piping natural gas under the Baltic Sea to Europe via Germany. Berlin, with the strongest economy in Europe, is arguably the main beneficiary of the Russian fuel supply. It is significant that former Chancellor Gerhard Schröder is the chairman of the board of Nord Stream AG, a company that belongs to Gazprom, Russia’s state-owned gas producer.

Trump is smearing Germany, in essence, as sleeping with the enemy. And when you append that “transgression” with the lack of “loyalty” due to NATO military spending, well then you have a traitor in your ranks.

The Donald is all about coercing other nations to bail out the US economy. He twists inherent US economic problems of trade deficits and debt into allegations that other nations are “taking advantage of us”. We see this with regard to China and Europe over trade tariffs.

The same goes for the US and its relations with the 29-member NATO alliance. Trump has continually browbeaten other members to spend more on military to “take the burden off America”. But America’s colossal annual military budget of over 3 per cent of its gross domestic product GDP (over $700 billion) is not due to US generosity or chivalry towards allies. It is more to do with the inherent US addiction to the military-industrial complex for sustaining its economy.

Trump has repeatedly chided European members of NATO for not allocating more to military financing. For years, Germany’s annual defense budget has been around 1.1-1.2 per cent of its GDP. If Germany were to hit its NATO 2 per cent target it would almost double the country’s military spending to some $90 billion a year.

Lurking in Washington’s calculation is this: the extra massive expenditure would increase sales of US-made warplanes, helicopters and warships to Europe. In other words, Trump wants Germany and other European members of NATO to raise spending in order to bail out the US economy.

In order to put even more squeeze on Germany and others, Trump is now using NATO as a policing mechanism. Countries not raising contributions, according to arbitrary US measure, are “disloyal”. By way of emphasizing perfidy, Trump is referring to normal trade relations with Russia as somehow a sign of “treason”.

In his Oval Office meeting with Stoltenberg, Trump also cited Iran and its alleged spread of terrorism across the Middle East as another challenge for NATO.

After Trump axed American participation in the Iran nuclear deal last week, the European Union has sought to close ranks to support the accord. The EU summit this week in Bulgaria declared that European companies doing business with Iran must be shielded from US sanctions reimposed on Tehran.

European Council President Donald Tusk denounced the Trump administration for its “capricious assertiveness”. He quipped too that “with friends like this who needs enemies?”

Jean-Claude Juncker, European Commission chief, also hit out at Washington’s interference in EU foreign relations, saying “we will not negotiate with a Damocles sword hanging over our heads”.

But, according to Trump’s definition, evidently transferred to NATO, Iran is an enemy state which must be confronted by the alliance. “Everywhere there is terrorism and instability, Iran is behind it,” said Trump, with Stoltenberg seated beside him.

As with trading with Russia, that means European members of NATO which continue to pursue investments and business in Iran are “collaborating” with the enemy.

The Trump administration is thus using its geopolitical prejudices and NATO as a form of leverage on European nations, in particular the strongest, Germany.

If Germany can be browbeaten into submitting to Washington’s interests, and bailing out its economy, then the rest of Europe will likely follow suit. Some 20 other members of NATO do not currently hit their 2 per cent spending target, including France, Italy, Netherlands, Belgium, Denmark, Austria.

Here’s the rub though for the American bully. Already, Europe has hit new levels of exasperation with Trump’s domineering attitude. His unilateral disregard for Europe’s strategic interests has been demonstrated over and over, from ripping up the Paris Climate Accord to reckless intervention in the Palestinian-Israeli conflict.

Trump’s broadside to the Iran nuclear deal and high-handed threats of economic retribution for Europe doing business with Iran has rebounded to inflict damage on the so-called “transatlantic partnership” – the relationship between Washington and Europe that has prevailed for seven decades since the Second World War.

The US-led NATO alliance has always served as a US instrument for keeping Europe aligned with Washington’s strategic priorities.

However, it is clearer than ever that Washington is using the alliance to subjugate Europe, Germany in particular, to its interests, even when that means Europe being disadvantaged, whether in commercial relations with Russia, Iran or whomever. 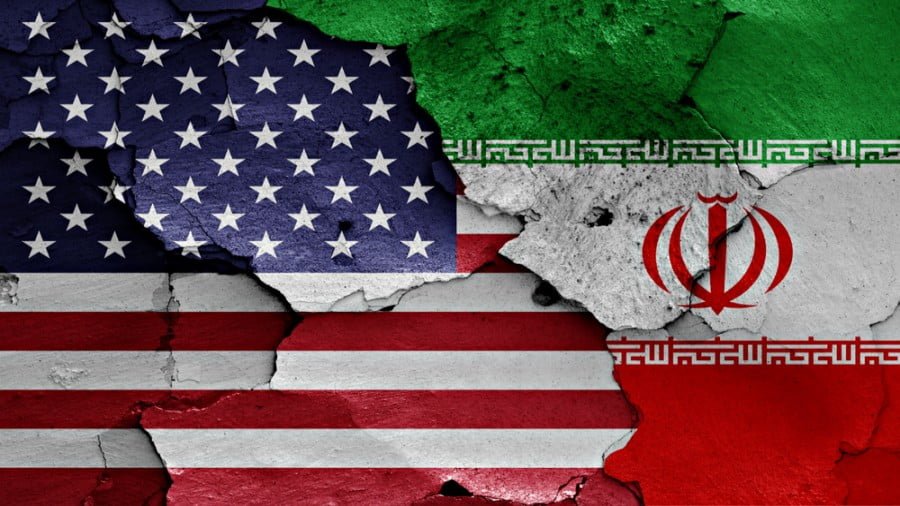 In the past few days, the Internet has been flooded with a frankly silly rumor about the US soliciting Australia’s assistance in preparing an attack on Iran. Needless to say, that report does not explain what capabilities Australia would possess which the USA would lack, but never-mind that. Still, the report was picked up in… 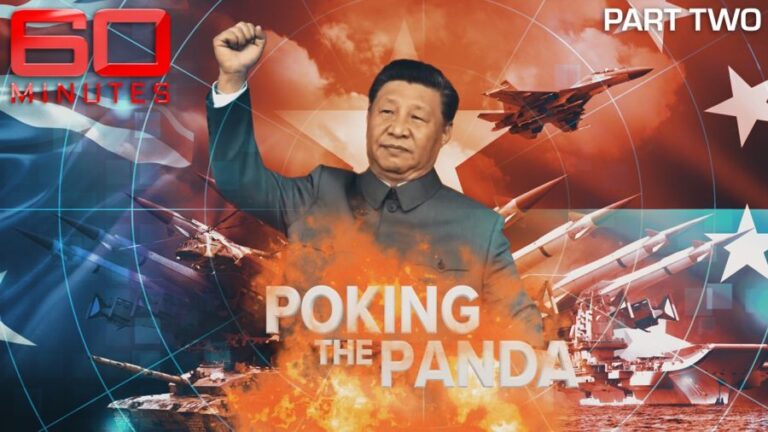 Listen to a reading of this article: ❖ 60 Minutes Australia has churned out yet another fearmongering war propaganda piece on China, this one so ham-fisted in its call to beef up military spending that it goes so far as to run a brazen advertisement for an actual Australian weapons manufacturer disguised as news reporting…. 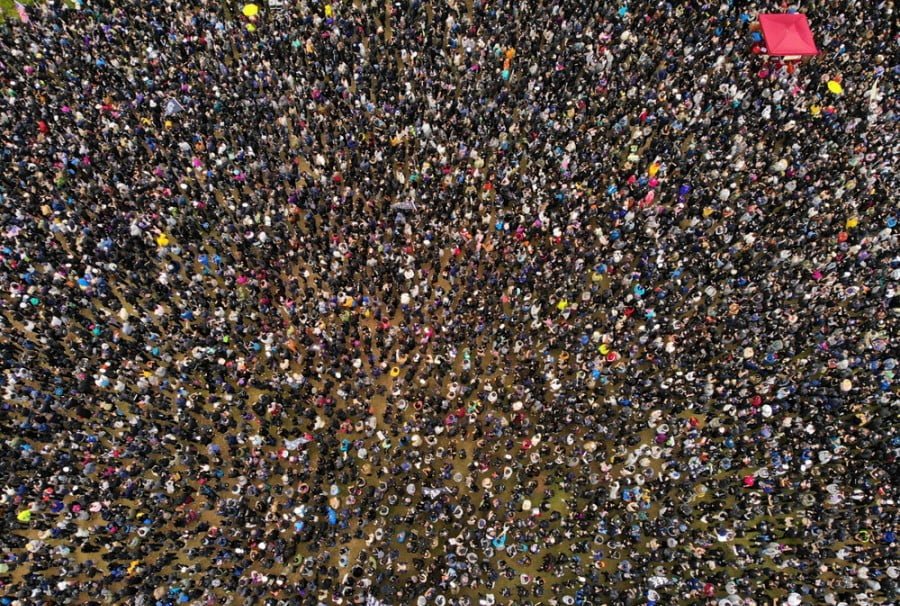 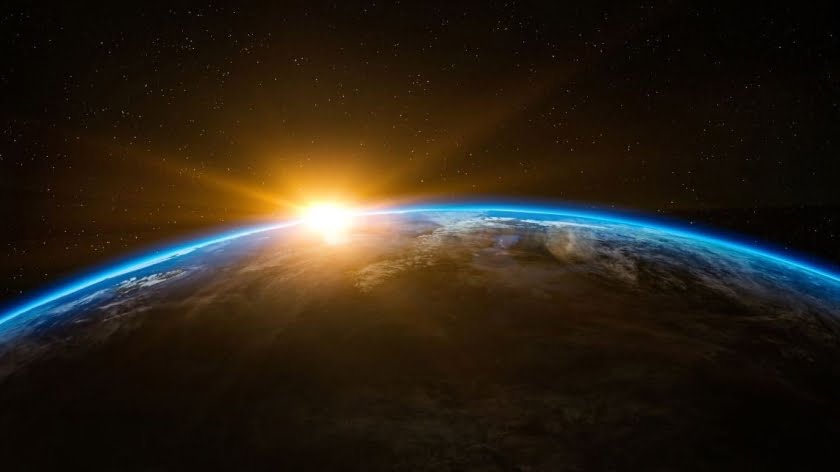