Why is Netanyahu so Obsessed with Iran?

Israeli Prime Minister Benjamin Netanyahu put on a dramatic performance this week, revealing what he alleged was “Iran’s secret nuclear archive”. He did so with a theatrical flourish, ripping down a black curtain concealing the supposed 55,000 files bound in binders on shelves, along with the shiny cases of 183 CDs containing another 55,000 files worth of secret data.

They allegedly comprise the secret trove which Iran tried to conceal from the world. The display reminded me of a magician doing the big “reveal”, pulling the rabbit out of his hat to the oohs and aahs of his audience.

Netanyahu’s “theatre” was at the Kirya, Israel’s version of the Pentagon. Curiously, he was not accompanied by his Defence Minister Avigdor Lieberman, or Israeli army’s chief of staff, Gadi Eisenkot, nor even by Mossad chief, Yossi Cohen, whose operatives would’ve been involved in procuring the secret Iranian cache.

Presumably, the Israeli prime minister, who’s known to love the limelight and to put on a good show as well, wanted the focus on him and him alone.

As I watched the video, I couldn’t stop thinking of the office furniture salesman he was before he began his political career. He was selling, but I’m not sure the world was buying.

Netanyahu, as happened when he spoke to the UN General Assembly with audio-visual aids showing an Iranian nuclear weapon as a cartoon cannonball left himself open, if not to ridicule, at least to disbelief.

Netanyahu, as happened when he spoke to the UN General Assembly with audio-visual aids showing an Iranian nuclear weapon as a cartoon cannonball, left himself open, if not to ridicule, at least to disbelief

Though Netanyahu displayed what he claimed was the entire treasure trove behind him as he spoke, he displayed few of the documents. Almost all of them were in Farsi, translated into English, presumably by Israeli intelligence. No one has publicly stated they’ve seen the original documents.

This requires the world to accept his word at face value. Very few are willing to do that. Netanyahu’s reputation as a political huckster is quite well known both to world media and leaders of those countries he was targeting in an effort to sabotage the P5+1 nuclear agreement.

The components of a nuclear weapon programme that Netanyahu showed in his presentation were “baseless and childish“, according to Robert Kelly, former director of nuclear inspections for Iraq at the International Atomic Energy Agency (IAEA). For example, what Netanyahu showed as the drawing of a “nuclear device” was patently absurd, with relative sizes that couldn’t possibly work in practice. 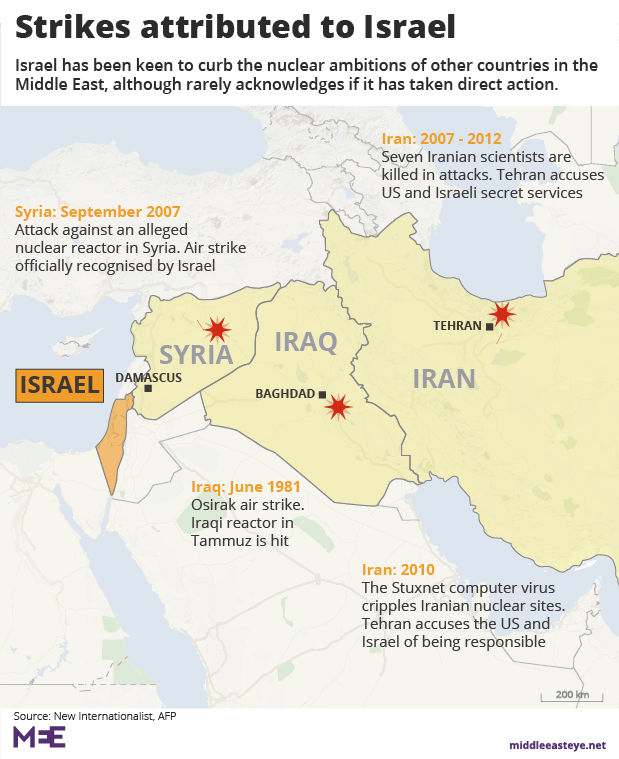 He also showed graphics containing technical specifications applicable to any credible civilian nuclear programme, but presented them as if they were intended for a military purpose.

Olli Heinonen, former chief inspector of the IAEA, said: “I just saw a lot of pictures I had seen before. Some of the images we saw [in Netanyahu’s presentation] I briefed to the [IAEA] board in closed session in February 2008.”

After Netanyahu’s presentation, the IAEA issued a statement declaring that it has “no credible” evidence Iran was working on developing a nuclear “explosive device” after 2009 and that it considered the issue “closed” after it was presented in a report in December 2015.

Iran’s past nuclear research activities with possible military dimensions suggest the best reason for preserving JCPOA: the nuclear agreement has severely limited Iran’s nuclear programme; has put it under a much more intrusive inspection regime than at any other time since Iran’s nuclear research began in the 1970s; has closed off all of Tehran’s pathways to a nuclear bomb; and has created conditions under which Iran cannot engage in any secret nuclear activities without getting caught.

…Saddam Hussein [is] “pursuing with abandon… weapons of mass destruction including nuclear weapons … Saddam is hell-bent on achieving atomic bombs as fast as he can…[He] has sprinkled Iraq with “nuclear centrifuges the size of washing machines” and nothing short of an American invasion or regime change would stop Saddam from passing out nuclear weapons to terrorist groups. An invasion, he concluded, would work out swimmingly. “If you take out Saddam…I guarantee you it will have enormous positive reverberations around the region…

How did Israel gain access to this trove? Yossi Melman, a veteran Israeli intelligence journalist, implies in a tweet that it was an inside job.

Apparently, Israel’s Mossad identified an Iranian with access to the materials and paid him an enormous amount of money to copy the documents or steal them. For this spy’s sake, I hope Israel also smuggled him out of the country. Otherwise, his life isn’t worth a plug nickel.

If Netanyahu’s performance was a piece of theatre, it was only a single act, and not even the opening one.

The first act was the announcement on Monday of a massive attack on an Iranian base called Mountain 47 outside Hama in Syria, allegedly killing 26 Iranians. The facility houses surface-to-surface missile batteries.

Though Israel hasn’t acknowledged its role, a highly knowledgeable Israel source confirmed to Middle East Eye that Israel indeed was responsible. He also revealed that the attack didn’t use the standard weapons profile Israel has used in the past, when it sent F-16s to launch their missiles from Lebanese airspace into Syria.

The Israeli missiles flew to their target through Jordanian airspace, which means that Jordan likely gave Israel permission to do so

This time, Israeli Dolphin submarines, built and financed by Germany, launched a missile salvo from the Red Sea which targeted Syria. There probably was another Dolphin stationed elsewhere involved in the attack, though the source did not report its location.

For this reason, the Syrian military and its anti-aircraft defence were caught unawares. They anticipated attacks from Lebanon to the west or possibly from the north. But these missiles came by sea instead of by air, and from a much longer distance and a direction (south) than they anticipated.

The Israeli missiles flew to their target through Jordanian airspace, which means that Jordan likely gave Israel permission to do so. This too is an unprecedented development in Israel’s relations with its Arab neighbors. As far as I recall, no neighbouring Arab state has ever permitted Israel to attack a fellow Arab state in such a manner.

That means that Jordan hasn’t just offended Syria, but Iran as well. This further escalates the hostility between the Sunni coalition – including Jordan and led by Saudi Arabia – and the Shiite alliance of Syria and Iran.

The reason for the use of the Dolphins is several-fold: Netanyahu wanted to impress Israel’s Syrian, Iranian and to an extent, Russian adversaries, that it has multiple options for attack.

He wanted to surprise them and show Israel’s strategic innovation in doing so. He especially wanted Iran to see the type of damage its weaponry could inflict: if or when Israel attacks Iran, these submarines would play an essential role in the attack.

Given the distance between Israel and Iran, and the difficulties its air fleet would face in flying to their targets, submarines are an excellent alternative.

One of my longstanding criticisms of the Israeli-German deal to build eight nuclear-capable submarines was that they would not only escalate the potential for lethality in the region, but could inflict a nuclear holocaust as well.

Though the Germans have not specifically designed the vessels to fire nuclear-armed missiles, the Israelis have adapted the submarines’ firing configuration to do so.

In the event that Israel uses the Dolphins to inflict massive damage on Iranian targets, Germany and Israel will both be forced to confront the irony that the very nation which killed six million Jews during the Holocaust has permitted Israel to use its weapons to cause mass suffering in the Middle East.

Returning to the Iranian archive and claims regarding its contents, most media commentators and intelligence analysts note that there is little new in them. They prove that Iran had a nuclear weapons program until 2003. The 2007 US intelligence report on Iran’s nuclear programme had already noted this.

Further, Netanyahu claims that the archive includes plans, blueprints, drawings and engineering studies that would be used by Iran to build nuclear weapons. The problem with this claim is that nothing Iran has done violates either the Non-Proliferation Treaty (which Iran has signed and Israel has not) nor the P5+1 agreement.

Iran isn’t required to destroy documents from previous nuclear research which may have been directed toward making a weapon. It’s only required to refrain from such research in the lab or on the launch pad. As former CIA official Paul Pillar wrote in The National Interest: “Holding files is not a violation of the agreement.”

“Naturally, you’d think the results of an espionage operation that lifted a treasure trove of Iranian documents would show some new evidence Iran is violating the deal. Nope…The entire presentation left observers wondering what all of this was about.…it’s no news that Iran had a nuclear weapons program…What Netanyahu did not display and what we have yet to find evidence of is Iran’s cheating on the terms of the JCPOA.”

Rubin asks, if Netanyahu didn’t have anything new to report, then why did he bother. Most likely, he figured that he’d bamboozle Trump into believing Iran is currently cheating.

Trump hears what he wants to hear, and is already disposed to undo the Obama administration’s signature achievement. It is altogether possible that President Trump will nix the deal – with just a little push from Netanyahu.

Besides being a clever showman, Netanyahu is a master manipulator. And Trump is a figure who was made to be manipulated, as many observers of his presidency have noted.

Watching Netanyahu’s video performance, you see a man desperately trying to convince the world of Iran’s perfidy. Why is this so important to him? Of course, he claims that Iran is an existential threat to Israel’s existence and the entire Jewish people. But even if Iran wanted to build a nuclear weapon, there is no proof whatsoever that Iran would target Israel.

There are two reasons Netanyahu finds Iran so critically important. It is a distraction from his own political woes: as long as he can focus Israel’s and the world’s attention on Iran, he is less threatened by the four different corruption cases, any one of which could end his career.

Secondly, it is a distraction from his government’s refusal to negotiate a peace deal with the Palestinians. As long as Netanyahu can persuade the world that Iran wants to blow it up, he will face far less pressure to offer any compromises to solve the 50-year-old conflict with the Palestinians.

Iran is a foil, a tool he can use quite cynically to protect himself and prolong his hold on political power.

Are Bibi and Bolton in the Wheel House Now?