Separating the political and the trade and economic factors when analysing the relations between two states is artificial as such. It makes sense only in cases when this or that factor becomes predominant in the given time period.

Over the recent months, the relations between the two global leaders (the US and China) saw the predominance of the kind in the trade and economic sphere. By early May this year, the situation clearly reached the verge of a real trade war.

However, the US-Chinese economic interests are intertwined to a great degree. The annual bilateral trade volume amounts to about $ 600 billion. Besides, the annually increasing Chinese trade surplus exceeded $ 370 billion in 2017.

The aforementioned fact is the main point which accounts for the US President’s outspoken anger, which manifested itself on May 17 during the meeting with the NATO Secretary General Jens Stoltenberg, when the US President (without much discretion in the choice of language) accused China of ‘robbing’ the US.

To be more precise, we shall have to note that the US allies also ‘rob’ the US of a comparable sum, so one cannot help remembering the Soviet classics (the film Wedding in Malinovka, 1967): ‘Them chinks come ‘n’ rob, them allies come ‘n’ rob just as well. What ya reckon should the poor American do?’

Let us also note that China is at the same time one of the largest US bond holders, financing the US economy in this fashion.

Actually, all those bad words (protectionism, nationalism, antiglobalism) that were spoken about the Donald Trump administration over the last year are in fact a reaction to its unilateral attempts to ‘restore justice’ in foreign trade. As a result, let us repeat, China found itself on the verge of a trade war with the US. But the 2 other US main trade partners (and key allies), the EU and Japan, are ‘underway’, too.

Let us reiterate that, on the whole, both the US and China (or another trade partner of the US) have sufficient motives to make a joint effort to resolve the various trade and economic issues of their bilateral relations.

To achieve that goal, on May 3-4 the Chinese capital saw the meeting of the representative delegations, which, however, was practically reduced to exchanging unrealistic mutual demands.

The second stage of negotiations, which took place on May 17-18 in Washington DC, was prepared more thoroughly by the parties. For instance, the US delegation excluded the Assistant to the President, Director of Trade and Industrial Policy and the Director of the White House National Trade Council, Peter Navarro, known for his hawk attitudes.

The joint statement that summarized the results of the Washington DC meeting is expressed in a rather positive way. Two passages in particular are worth noting: ‘There was a consensus on taking effective measures to substantially reduce the United States trade deficit in goods with China‘ and ‘Both sides attach paramount importance to intellectual property protections, and agreed to strengthen cooperation. China will advance relevant amendments to its laws and regulations in this area, including the Patent Law’.

The document gives no specific figures on the scope of the commitments made by the parties, nor does it include the deadlines for their fulfilment. Let us note that there was enough speculation about it in the media on the eve of the talks. For instance, they alleged that China would have to decrease its trade surplus with the US by $ 200 billion (over the next 3-5 years).

However, the economy hardly reacts to what the officials tell it to do. Unlike sending offensive aircraft carriers from one coast of the Pacific Ocean to the other, which is done as soon as the commander gives a signal. Therefore, it seems quite reasonable that it was decided that the statement in question should outline the general synopsis of the main directions of the bilateral economic cooperation.

It is worth noting the different attitudes of the US and the Chinese media commenting on the Washington DC negotiations results. Sharing a generally positive reaction to the fact that both countries retreated from the dangerous verge of a coming trade war, China feels more optimistic about the future. The US media emphasise the absence of specific figures in the final document.

As for the latest political events, it is worth noting that admiral Harry B. Harris Jr., who is finishing his military career as the Commander of the United States Pacific Command (USPACOM), was nominated as the new US Ambassador to South Korea. That is, the very same commander that used to give a signal to send US aircraft carriers to the vicinity of the Korean peninsula.

Let us remind you that quite recently he was expected to be designated as the new US Ambassador to Australia, the country that (as per the plans indicated by the same H.B. Harris Jr.) was to become one of the anti-Chinese ‘Four’ (including the US, India and Japan as well).

However, as we previously noted, China began to carry out the policy of resolving the issues in the relations with India and Japan. It is possible that, after the coming 2019 Parliamentary elections, Australia will also improve its relations with China.

Then, what can the reassignment of H.B. Harris Jr. (in his diplomatic career) mean? That Washington DC scrapped the ‘Four’ project? Taking into account all that was said, it is quite possible. But why send him to South Korea? Let us guess.

The thing is, the Korean peninsula is one of the several contemporary political world map areas where the competition between the two global leaders is especially strong. And Washington DC considers itself successful in the beginning of the new phase of the competition on the Korean peninsula, and is right about it. First, Pyongyang (which found itself in de facto political isolation) accepted most of the preliminary US demands for establishing the official bilateral contact, and second, Beijing made a big contribution to this move.

The Chinese leadership probably realised that they went too far to meet the wishes of ‘their friend Donald Trump’ and decided to restore the trust-based relations with North Korea. The two-stage negotiations between Xi Jinping and Kim Jong-un brought back the images of ‘indestructible friendship of the Korean War period’, and on May 17, Beijing saw the negotiations about strengthening the Chinese-North Korean inter-party connections.

It strengthened Kim Jong-un’s position at the coming meeting with Donald Trump even in the ‘unfriendly’ Singapore. It is already manifesting itself in the rhetoric of the North Korean leader, which is in fact a mere reaction to the obvious provocations by the ‘opponents’. The latter seem to have overestimated the importance of their successful first moves in the game on the Korean peninsula.

In this respect, nominating the recent commander of the most powerful US armed forces unit as the new US Ambassador to South Korea ought to be considered as a response message of power by Washington DC to Beijing.

In conclusion, one can only observe the continuation of the multiple factor game between the two global leading players. However, there are no more grounds for a more or less definite forecast of its course of development today than there were before the aforementioned events. 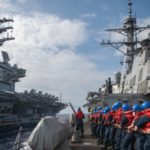 America’s Trade Policies Will End Up Destroying the Dollar

Chinese-American Trade Talks in the Year of the Pig

Why Is Iceland the Focus of Washington's New Trade Strategy?

Threats and Sanctions Everywhere – A Chronicle of Disorganized Chaos Foretold

What Beijing’s Retaliation Means for Oil