Will Saudi Arabia be the Answer to Israel’s Gas Conundrums?

About 80 kilometers off the coast of Haifa in Israel, a string of rigs, platforms and pipelines now work day and night, extracting natural gas from one of the largest reservoirs in the Eastern Mediterranean.

This resource, known as the Tamar Field, now powers businesses and homes throughout Israel. It has helped the country approach self-sufficiency in electricity production, while radically improving its energy import bill.

Along with other neighboring fields, Tamar also places Israel in the normally-enviable position of holding a major natural gas surplus, ready for export.

Yet – so far– Israel has failed to fully capitalize on this bounty.

Instead, a combination of security, politics and prices have kept many of Tel Aviv’s hydrocarbon riches locked firmly beneath the sea floor.

Now, though, the effort to find a way to release this giant resource has led to some controversial plans – as well as some unlikely-sounding deals with former foes.

Israel has several large offshore gas reserves, with the now-depleted Ashkelon field the first to be exploited. Tamar was then discovered in 2009, with the larger Leviathan field uncovered in 2010. Since then, two more fields have also been discovered – Karish and Tanin. 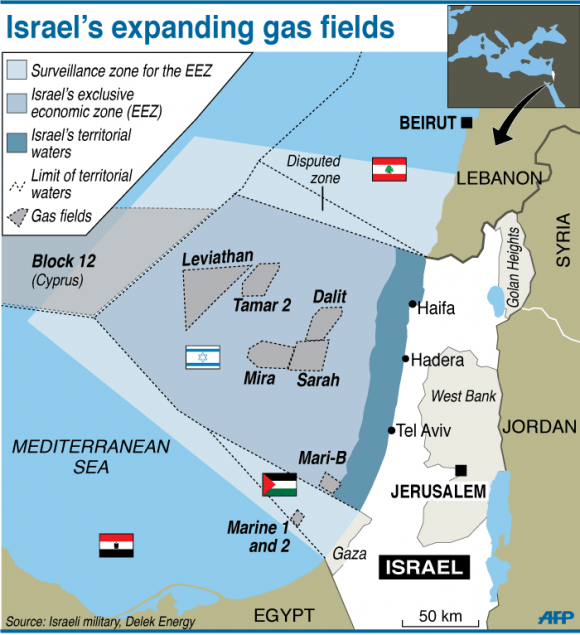 Two companies have been key in developing Tamar and Leviathan – Texas-based Nobel Energy and Israel’s Delek Group – while Karish and Tanin are being developed by Greece’s Energean.

So far, however, only Tamar has been brought into production, while Leviathan is scheduled to begin delivering gas next year. Of the other two, Karish will be the first to begin output, with this scheduled for 2021.

Given the extent of these reserves and the relatively small size of Israel’s domestic market, much of the gas from the most recent discoveries is thus targeted for overseas sale.

On paper, there are also many potential buyers.

To the north is Turkey, with a large and growing economy, while to the northwest lies Europe. Egypt, too, has a fast-growing population and rapidly expanding economic needs, while to the south, Jordan has no oil and gas of its own.

Yet, “all of the possibilities for export of Israeli gas, except to Jordan, are very difficult,” says Charles Ellinas, the CEO of energy consultancy EC Cyprus Natural Hydrocarbons Co.

Nobel has a deal with the Hashemite Kingdom’s national electricity company to supply $10 billion worth of gas via a planned underground pipeline. Israel also already supplies gas to Jordan’s potash and bromine industries, via a third-party US company.

Exporting to Turkey, however, would indeed be a lot more difficult. This is not only because of the current dire relations between Ankara and Tel Aviv, but also due to the unresolved Cyprus dispute. Any pipeline heading for the Turkish coast would have to go through Cypriot waters – a route unlikely to find backers while the island remains de facto divided.

Meanwhile, a route to Europe bypassing Turkey – the proposed East Med Pipeline – would have to travel 2,000km between Israel, south Cyprus, Greece and Italy. This also involves crossing one of the most seismically active sea floors in the Mediterranean, often at great depth.

In addition, “Even if it were technically possible,” says Ellinas, “it would not be commercially feasible.”

This is because Israeli gas is relatively expensive, in recent times seeing it at much the same price as the Russian gas already supplied to much of Europe. With the additional cost of the East Med pipeline – estimated at about $7.5 billion – “by the time the gas got to Europe, it would be too expensive for gas companies to contemplate buying,” says Ellinas.

Regarding Egypt, a recent deal between Delek, Nobel and Egyptian company Dolphinus Holding to buy $15 billion of gas was struck back in February.

Yet, this is being hampered by an ongoing dispute between the two countries over a 2015 ruling by the International Chamber of Commerce that ordered Egypt to pay Israel $2 billion in compensation for earlier non-delivery of Egyptian gas to Israel.

This occurred when repeated attacks by militants on a pipeline in Sinai led to Egypt shutting off supply, back in 2012. Cairo is likely to insist on some adjustment to this compensation in the light of this new, $15 billion deal, potentially adding to costs.

In addition, the route Israeli gas will take to get to Egypt is also undecided. The Sinai – the shortest land route – is still subject to security concerns, while an undersea route would also add to the expense.

In addition, “you have to ask, why would Egypt sign such a deal with Israel when it doesn’t know its future demand and has major gas resources of its own?” says Tareq Baconi, a research fellow with the European Council on Foreign Relations. These resources include the Eastern Mediterranean’s largest find ­to date – the giant Zohr gas field.

“The answer is that the gas is not intended for Egypt,” adds Baconi, “but for re-export. So, maybe in future, Egypt will act as a fig leaf for Israeli gas being sold on elsewhere.”

One place that certainly needs extra gas is Saudi Arabia. Strong population growth, combined with plans to diversify and further expand the economy, have recently propelled the Kingdom’s oil and gas major, Saudi Aramco, to look for more supply on the global market.

Until now, much of the country’s electricity has been generated by burning fuel oil, of which Saudi Arabia has had a legendary abundance. This is proving no longer sustainable, however, with the search for gas part of a recent diversification strategy that has included investment in nuclear and solar.

Meanwhile, Israeli-Saudi relations have undoubtedly been improving in recent times, as both find common causes – and downgrade past disputes.

“Palestine has become more of a secondary issue,” says Baconi. “Iran is the principal issue and is dominating the agenda of the Gulf monarchies. Israel is a potential ally in that struggle.”

Yet, while current circumstances might favor Israeli-Saudi rapprochement, obstacles still remain when it comes to gas.

“There’s no infrastructure to bring gas originating in Israel to the main centers in Saudi Arabia,” points out Baconi. Gas arriving on the Kingdom’s northern frontier would have many hundreds of kilometers to go before arriving at Riyadh, Jeddah, Mecca or Medina.

Yet, if Saudi plans to construct the giant, $500 billion new city of Neom in the north, go ahead, “this would dramatically change the situation,” says Baconi. Uncertainty, however, still surrounds these grandiose plans.

At the same time, “there would still be a problem with pricing,” says Ellinas. “Israeli gas is still expensive. Plus, it would be even more politically challenging – it would be a very big step for the reform-driving Saudi crown prince, Mohammed bin Salman, with many waiting for him to make one false move.”

Yet this is a region where nowadays, few of the past’s certainties seem quite so solid – and where those who are apparently opposed in one sphere may well work as allies in another.