The ISIS Suweida attack is a message to its branch in Quneitra, and to Russia and Damascus

In one of the bloodiest massacres after Speicher (Iraq), more than 150 ISIS militants attacked the province and the city of Suweida killing over 220 farmers (men, women, children) and members of the Syrian army and the local National Defence Forces. However, the “biggest hit was directed to Russia and Damascus who are inviting all refuges to return from neighbouring countries,” as a decision maker in the Syrian capital said.

On Wednesday at 05:00 am local time, ISIS militants, onboard of estimated 35 to 40 vehicles crossed al-Badiya (Syrian Steppe) to break, after long hours of travelling, into Suweida province. The first villages to be attacked by the terrorist group were Rami, Chbeke, al Mushannaf, Rami, Tima, Doma, al-Ghida, al-Sharihe before reaching the city of Suwaeida.

The ISIS convoy left behind death and destruction killing inoffensive farmers and their families in their homes. Many houses were looted, indicating the convoy travelled light and fast, imitating Napoleon Bonaparte’s troops, eating from local stocks as observed by the forces who followed the same path taken by the terrorists.

There is no doubt that ISIS’s planning was highly effective, showing knowledge of the land and the slim forces protecting its objectives. The firepower in Suweida that confronted ISIS forced the group to pull out and prevented it from committing a massacre much superior to the one already made.

Farid Sharafeddine who escaped the Suweida’s massacre told me: “ISIS knew inhabitants and families. They captured young men and took these to knock on their relative’s nearby to open the door and then be killed by the raiders.

Eight of the Syrian Army soldiers were killed, and 28 of the National Defence Forces lost their lives while engaging with ISIS in the city. The clash lasted over four hours with 32 ISIS killed and left behind. The security forces captured a couple of ISIS members alive.

The Syrian Air Force intervened in the last hour bombing ISIS barricades in a few positions. ISIS left behind suicide men ready to die to delay the pursuit and cover the withdrawal of what remained of the forces who managed to be captured (and executed as published by ISIS itself). 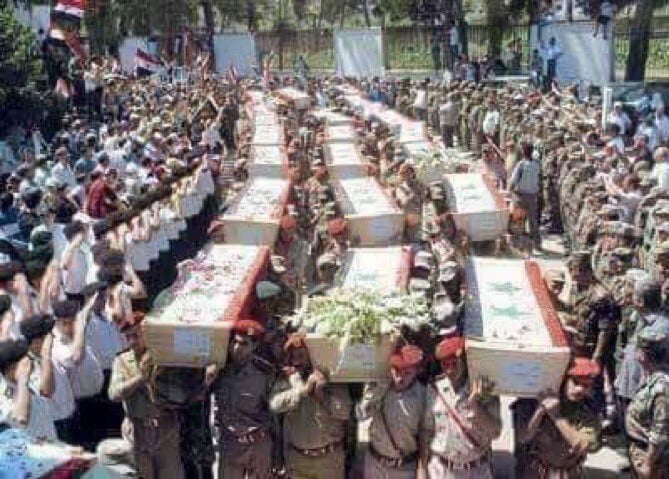 Sources in Damascus said ISIS aimed for many objectives in this successful raid: 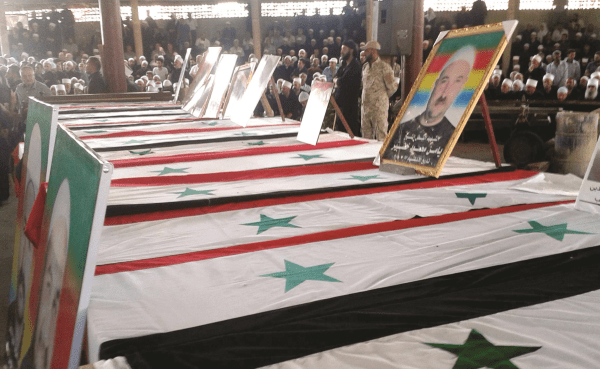 This is maybe a pessimistic reading into a previously well-planned attack by ISIS. There is no doubt that many circumstances helped ISIS to cross unnoticed by the continuous US presence in the air of al-Badiya, monitoring every single movement (the US hit twice a Syrian force breaking the safety perimeter minutes after the event). There is also Russian incapability of spotting tens of ISIS vehicles moving in the area that could attack an area under Russian control. Also, it is an apparent failure in security and defence by the Syrian forces who felt at ease in a liberated area and underestimated the remainder of the ISIS forces.

This massacre proved there are ISIS leaders who can think, plan and execute a complicated objective (two superpower forces present in the area). That was a massive alarm for the Syrian troops to remain on alert and eliminate ISIS entirely from all liberated regions and secure their protection. The numerous victories registered in the last 12 months lowered the defence of the winners, disregarding the US factor that can hit under the belt when the opportunity arises. After all, this massacre was an opportunity for the US to show Damascus and Moscow’s failure to keep and protect its victory.

Where is the Proof? We’ve Been Here Before, Al Baghdadi’s been Reported Dead or Fatally Injured Many Times

Opposition or Terrorists: Who is Syria and Russia Bombing in Idlib?

Israel Expands Strikes in Syria after Deal with Russia on Iran?

US Propaganda Blitz Ahead of Idlib’s Liberation
Opinion
ISISRussiaSyria