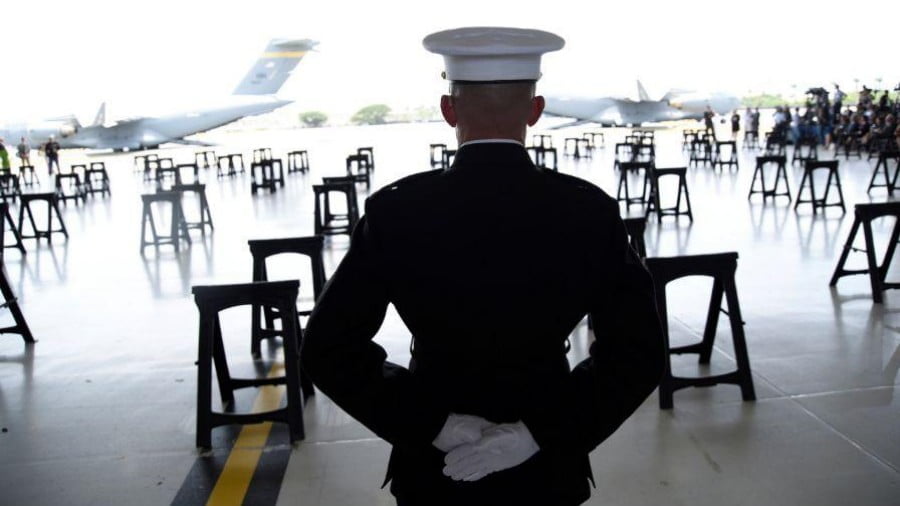 When Defense Secretary James N. Mattis spoke at the 2018 Center for the National Interest Distinguished Service Award dinner in late July, he outlined a foreign policy strategy for the United States that focused on the resurgence of great-power competition. Mattis also warned that the United States could endanger itself from within. Specifically, he stated that the growing national debt amounts to a form of “inter-generational theft” that Congress must address.

The solvency of the United States and the balance between commitments and power has been an abiding theme of foreign policy realists. In his book, U.S. Foreign Policy: Shield of the Republic , the dean of American realist thinkers, Walter Lippmann, observed in 1943:

If entitlement spending and unpaid tax cuts are a big part of the story of America’s debt crisis, it is also the case that entanglements in wars abroad are contributing more to the national deficit than is often acknowledged. In a fascinating new book Taxing Wars , Sarah E. Kreps, a professor of government at Cornell University, reminds us that a fundamental shift has taken place since 1945: the United States has repeatedly failed to impose war taxes and relied on borrowing to finance its foreign wars, whether in Vietnam, Iraq or Afghanistan. Her argument that deficit spending allows political leaders to muffle opposition to more limited conflicts rather than demanding fiscal sacrifices from the public rings true and it suggests that since 1945, the United States has engaged in “Hide-and-Seek” wars. In succumbing to the temptation to conduct under-the-radar conflicts, U.S. officials have helped to erode American democracy by evading the constraints and public pressure that would, more often than not, accompany conflict abroad.

Enlightenment philosophers such as Immanuel Kant believed that the costs of war would help to deter democratic leaders from initiating reckless hostilities. In Kant’s view, if the consent of citizens is required to declare war, then

nothing is more natural than that they would be very cautious in commencing such a poor game, decreeing for themselves all the calamities of war. Among the latter would be: having to fight, having to pay the costs of war from their own resources.

Adam Smith, by contrast, worried that rulers would simply resort to running greater deficits. In the Wealth of Nations , he observed that the public may even view warfare as an enjoyable distraction from the daily cares of life:

In great empires the people who live in the capital, and in the provinces remote from the scene of action, feel, many of them scarce any inconveniency from the war; but enjoy, at their ease, the amusement of reading in the newspapers the exploits of their own fleets and armies. To them this amusement compensates the small difference between the taxes which they pay on account of the war, and those which they had been accustomed to pay in time of peace. They are commonly dissatisfied with the return of peace, which puts an end to their amusement, and to a thousand visionary hopes of conquest and national glory, from a longer continuance of the war.

Smith said that leaders who were eager to finance wars would prefer to “defray this expense by misapplying the sinking fund than by imposing a new tax. Every new tax is immediately felt more or less by the people. It occasions always some murmur, and meets with some opposition.” A war tax, Smith added, ran the risk of “offending the people, who, by so great and so sudden an increase of taxes, would soon be disgusted with the war.”

In America, both World War I and World War II were popular conflicts that did not arouse the kind of antipathy toward the costs of war described by Kant and Smith. But in both instances, the costs and commitments of entry did force Woodrow Wilson and Franklin D. Roosevelt, respectively, to spend several years making the case for intervention. Both presidents also sought to follow, as far as possible, a pay-as-you-go model.

In 1914, three years before America entered World War I, Wilson declared that new taxes were needed to fund defense programs. “Borrowing money is short-sighted finance,” Wilson said. “We should pay as we go. The industry of this generation should pay the bills of this generation.” This lofty sentiment, however, came with some caveats. Before 1917, Wilson was careful to spare workers and agrarian interests from higher taxes for fear of further stoking their opposition to war. Once America went to war in April 1917, though, Treasury Secretary William Gibbs McAdoo declared, “Is it possible that in this rich country . . . there should be any quibbling about the necessary taxation.” Wilson himself called the 1918 Revenue Act a “victory tax” in exchange for the “ineffaceable boon of peace.” After the war ended, these confiscatory rates came down quickly as both Wilson and his Republican successors viewed them as inimical to prosperity.

World War II also saw a dramatic rise in tax rates. But the advent of the New Deal in the 1930s meant that this time they were anything but temporary. The top marginal income tax rate was 78 percent in 1941. After the Japanese attack at Pearl Harbor, Congress raised income taxes in 1942, adding a 90 percent excess profits tax and a 5 percent Victory Tax on net income. Overall, the tax base increased by 1,000 percent from 1940–45.

In contrast to World War I, Congress did not slash taxes after the defeat of Nazi Germany and Imperial Japan following World War II. Instead, the rise of the social welfare state became decisive for the way politicians approached the issue of federal spending. According to Kreps,

In the years since World War II, against a backdrop of high peacetime tax rates dedicated to financing an array of prized social programs, war-specific rates have essentially come off the table as a policy option. Leaders increasingly structured the costs of war to minimize the impact on the populace, which may serve to anticipate and deflect public opposition to war but in turn does violence to democratic accountability.

After 1945, the United States began to fight new wars that were more limited in scope than the massive battles that had taken place during World War II. The problem was twofold: limited wars did not command much popularity—whether it was the Korean War or the Vietnam War—and the public had no interest in slashing the new social safety net or raising taxes to pay for military conflicts abroad. In January 1951, 66 percent of Americans said that they wanted U.S. troops to depart Korea. During Vietnam, Lyndon B. Johnson never used the term “war tax,” instead referring to any hikes as a “surcharge,” to make it appear impermanent—a maneuver reminiscent of Kaiser Wilhelm’s introduction of a champagne tax in 1902 to help temporarily pay for his navy flotilla, one that remains in force today at slightly over one euro per bottle. The failure to pay for the Vietnam War helped lead to the corrosive inflation of the 1970s, which was only tamed by Federal Reserve chairman Paul Volcker’s imposition of draconian interest rates that resulted in a recession from 1981–82.

After the September 11 attacks, the United States compounded its earlier failures to pay upfront for limited wars. Instead of calling for any sacrifices, George W. Bush urged American to go shopping. For his part, President Obama tried to playdown the fact that American troops were fighting in Afghanistan and simply referred to it, as Bob Woodward noted, as “working in a theater.” But America’s pecuniary obligations are hardly inconsequential: a Congressional Budget Office study published in October 2017 estimates that the pricetag of the wars in Iraq and Afghanistan is over $2.4 trillion. Washington has sometimes sought to rely on proxy forces. But this is no real solution. As Daniel Byman points out in this issue,

often proxy war promises to hit the political sweet spot between doing too little and too high a cost. In reality, however, it is an imperfect form of warfare. Better policies can improve our track record, but it is bound to disappoint many of its proponents, and at times put a country on the road to an unwanted conflict.

There is no way to elide the discrepancy between America’s commitments and power. Unless they are brought into equilibrium, America risks the return of the very fiscal and foreign policy perils that Walter Lippmann warned about almost a century ago.