Economic War on Iran Is War on Eurasia Integration

Hysteria reigned supreme after the first round of US sanctions were reinstated against Iran over the past week. War scenarios abound, and yet the key aspect of the economic war unleashed by the Trump administration has been overlooked: Iran is a major piece in a much larger chessboard.

The US sanctions offensive, launched after Washington’s unilateral pullout from the Iran nuclear deal, should be interpreted as an advance gambit in the New Great Game at whose center lies China’s New Silk Road – arguably the most important infrastructure project of the 21st century — and overall Eurasia integration.

The Trump administration’s maneuvers are a testament to how China’s New Silk Road, or Belt and Road Initiative (BRI), threaten the US establishment.

Eurasian integration on the rise

Eurasian integration is on display in Astana, where Russia, Iran and Turkey are deciding the fate of Syria, in coordination with Damascus.

Echoing the Ancient Silk Road, Syria will be configured as an important BRI node, key to Eurasia integration.

In parallel, the Russia-China strategic partnership – from the intersection between the BRI and the Eurasia Economic Union (EAEU) to the expansion of the Shanghai Cooperation Organization (SCO) and the solidifying of BRICS Plus — has immense economic stakes in the stability of Iran.

The complex interconnection of Iran with both Russia (via the EAEU and the International North-South Transportation Corridor) and China (via BRI and oil/gas supplies) is even tighter than in the case of Syria in the past seven years of civil war.

Iran is absolutely essential for Russia-China for the partnership to allow any “surgical strike” — as floated in Syria — or worse, hot war initiated by Washington.

A case could be made that with his recent overture to President Putin, President Trump is trying to negotiate some sort of freeze in the current configuration — a remixed Sykes-Picot for the 21st century.

But that assumes Trump’s decision-making is not being dictated or co-opted by the US neocon cabal that pressed for the 2003 war in Iraq.

If the situation turns volcanic when the US oil sanctions on Iran kick in by early November, an actual remix of the recent North Korea scenario would be in the cards. Washington simultaneously sent three carrier battle groups to terrify North Korea. That failed – and Trump ended up having to chat with Kim Jong-un.

Despite the US record around the world — endless threats of a Venezuela invasion with the only tangible result an amateurish, failed drone attack; 17 years of endless war in Afghanistan, with the Taliban still as immovable as the Hindu Kush peaks; the “4+1” – Russia, Syria, Iran, Iraq, plus Hezbollah – winning the vicious proxy war in Syria — US neocons scream and shout about striking Iran.

As with North Korea, Russia and China will send unmistakable signs that Iran is in their closely coordinated Eurasian sphere of influence, and any attack on Iran will be considered an attack on the whole Eurasian sphere.

Stranger things have happened, but it’s hard to see any rational actors in Washington, Tel Aviv and Riyadh wishing to have Beijing and Moscow — simultaneously — as lethal enemies.

All across Southwest Asia, there are no doubts the official Trump administration – and in fact, the whole Beltway – policy on Iran is regime change. So from now on, short of hot war, the new rules of the game spell out stepped-up cyber-warfare.

From Washington’s point of view, in terms of return on investment that’s a relative bargain; cyber-warfare keeps the Russia-China partnership away from direct involvement while in theory digging deeper into the economic collapse of Iran, heavily advertised as imminent by Trump administration officials.

The Chinese Foreign Ministry could not be more explicit on the US effort to reimpose global sanctions on Iran. “China’s commercial cooperation with Iran is open and transparent, reasonable, fair and lawful, not violating any United Nations Security Council resolutions,” it said.

That echoes the Russian Foreign Ministry on the US sanctions: “This is a graphic example of Washington’s continued violation of UN Security Council Resolution 2231 and trampling upon the norms of international law.”

President Trump for his part has also been explicit: any nation that violates the sanctions against Iran will not do business with the US.

Good luck with having support from Turkey or Qatar – completely dependent on Iran for food, use of civilian airspace and sharing gas exploration in South Pars. Not to mention Russia-China assuring Tehran’s back on all fronts.

How not to do business with China?

The die is cast. China not only will continue but also will increase its purchase of Iranian oil and gas.

The Chinese auto industry – currently with 10% of the Iranian market – will simply take over as the French leave. Chinese companies are already responsible for 50% of auto parts imported into Iran.

Russia for its part has pledged to invest as much as $50 billion in Iranian oil and natural gas. Moscow is very much aware of the Trump administration’s next possible step; imposing sanctions on Russian companies investing in Iran.

Washington simply can’t “not do business” with China. The entire US defense industry is dependent on China for rare earth materials. Since the 1980s, US multinationals set up their export supply chains in China with direct encouragement of the US government.

The EU for its part has enforced a Blocking Statute – never used before, although in existence for already two decades — to protect European companies, even coming to the point of imposing fines on businesses that pull out of Iran because of plain fear.

In theory, that shows some balls. And yet, as EU diplomats in Brussels told Asia Times, there’s a major conditional: US satrapies/vassals abound across the EU, so quite a few EU-based companies, as in the case of Total and Renault, in the end, will simply roll over.

Meanwhile, what Iranian Foreign Minister Mohammad Javad Zarif said about US unilateralism – the world “is sick and tired”
of it – keeps echoing all across the Global South.

The Mother of All Financial Hurricanes

Those clamoring for war with Iran cannot possibly understand that the nightmare scenario of a Strait of Hormuz/Persian Gulf energy transit closure – the choke point for 22 million barrels of oil a day – would represent, ultimately, the death of the petrodollar.

The Strait of Hormuz can be configured as the Achilles heel of the entire West/US economic power; a closure would detonate the mother of all hurricanes in the quadrillion-dollar derivatives market.

Unless China does not buy Iranian energy, US sanctions — as a geo-economic tool — are essentially meaningless.

Certainly not, of course, for the “Iranian people” so dear to the Beltway, as more day-to-day financial grief is already setting in, side by side with a sense of national cohesiveness in the face, once again, of an external threat.

China and Russia have already pledged to continue to implement the JCPOA, alongside the EU-3; after all, this is an UN-endorsed multilateral treaty.

Beijing has already informed Washington in no uncertain terms that it will continue to do business with Iran. So the ball is now in Washington’s court. It will be up to the Trump administration to decide whether to sanction China for its unwillingness to stop trading with Iran.

It’s not exactly a wise move to threaten China – especially with Beijing on an irresistible historical ascendancy. Nehru threatened China and lost a big chunk of Arunachal Pradesh to Chairman Mao. Brezhnev threatened China and faced the wrath of the PLA on the banks of the Ussuri River.

China is able to cut the US off in a minute from its rare earth exports, creating a US national security catastrophe. Now that’s when a trade war will enter real incandescent territory. 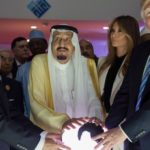 From Ego to Empire, All Our Problems Stem from the Impulse to Control

Iraq Is Going Further Down the Drain

New US Plans in the Middle East
Opinion
ChinaEurasiaIranNorth KoreaRussiaUS