Is Turkey Sleeping with the Enemy? The Russia -Turkey -Iran “Triple Entente”

Donald Trump has just sent a dirty message to the president of Turkey.

What is the objective behind Trump’s statement?

While Turkey is officially a member of NATO as well as a firm ally of the US, president Recep Tayyip Erdoğan has been developing “friendly relations” with two of America’s staunchest enemies, namely Iran and Russia.

Sleeping with the enemy: “Our relations are not good with Turkey” says Trump.

US-Turkey military cooperation (including US air force bases in Turkey) dates back to the Cold War. Today Turkey is now sleeping with both Iran and Russia.

And their currency “slides rapidly downwards against our very strong dollar”, says Trump. 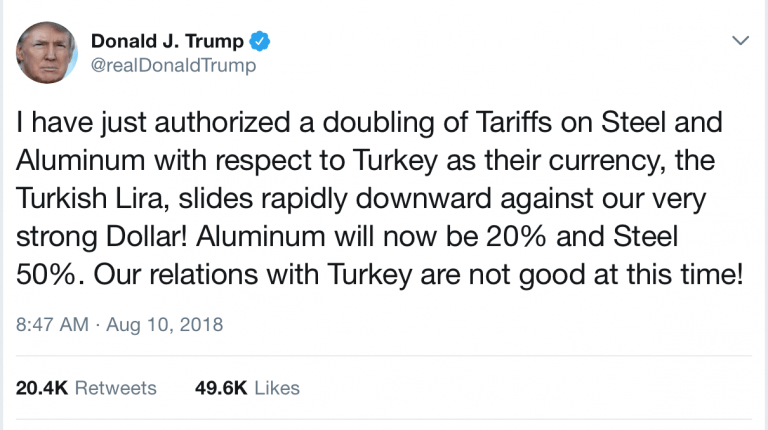 Turkey has developed an alliance of convenience with Iran. And Iran in turn is now supported by a powerful China-Russia block, which includes military cooperation, strategic pipelines as well extensive trade and investment agreements.

But there is more than meets the eye.

While the US and Israel have for many years contemplated military action (including the preemptive use of nuclear weapons) against Iran, this military agenda –which relied on a longstanding military-intelligence alliance between Israel and Turkey– is currently in jeopardy. And so is Ankara’s bilateral military alliance with Washington.

The Israel-Turkey alliance which dates back to the Security and Secrecy Agreement (SSA) signed under Turkey’s Tansu Çiller government in 1993-94 included:

…A 1993 Memorandum of Understanding led to the creation of (Israeli-Turkish) “joint committees” to handle so-called regional threats. Under the terms of the Memorandum, Turkey and Israel agreed “to cooperate in gathering intelligence on Syria, Iran, and Iraq and to meet regularly to share assessments pertaining to terrorism and these countries’ military capabilities.”

“Turkey agreed to allow IDF and Israeli security forces to gather electronic intelligence on Syria and Iran from Turkey. In exchange, Israel assisted in the equipping and training of Turkish forces in anti-terror warfare along the Syrian, Iraqi, and Iranian borders.” (see Michel Chossudovsky, 2004)

The SSA agreement was a carefully designed instrument of US foreign policy which set the stage for a firm and close Israel-Turkey relationship in military and intelligence cooperation, joint military exercises, weapons production and training.

Already during the Clinton Administration, a triangular military alliance between the US, Israel and Turkey had unfolded. This “triple alliance”, dominated by the US Joint Chiefs of Staff, integrated and coordinated military command decisions between the three countries pertaining to the broader Middle East. It is based on the close military ties respectively of Israel and Turkey with the US, coupled with a strong bilateral military relationship between Tel Aviv and Ankara. ….

The triple alliance is also coupled with a 2005 NATO-Israeli military cooperation agreement which includes “many areas of common interest, such as the fight against terrorism and joint military exercises. These military cooperation ties with NATO are viewed by the Israeli military as a means to “enhance Israel’s deterrence capability regarding potential enemies threatening it, mainly Iran and Syria.” (See Michel Chossudovsky,“Triple Alliance”: The US, Turkey, Israel and the War on Lebanon, August 6, 2006)

In 2006, shortly before Israel’s invasion of Lebanon, the US and Turkey signed a “Shared Vision” (which committed Turkey to supporting Israel). The agreement was:

“characterized by strong bonds of friendship, alliance, mutual trust and unity of vision. We share the same set of values and ideals in our regional and global objectives: the promotion of peace, democracy, freedom and prosperity.”

The bilateral US-Israel and US-Turkey alliance coupled with the Israel-Turkey military and intelligence cooperation agreement as well as the Israel-NATO agreement (2003), constitute the foundations of the US-Israel-Turkey “Triple alliance” or what the Brookings Institute calls the US-Turkey- Israel Triangle.

This triangular structure of alliances is dead much to the detriment of Washington.

What is unfolding is the building of a new Triple Entente between Turkey, Iran and Russia.

At this stage, this Triple Entente goes beyond an “alliance of convenience”. It constitutes a major restructuring of both military and economic alliances.

On a related matter, the Trump administration is involved in acts of manipulation on foreign exchange markets with the full support of Wall Street.

What is the consequence of Trump’s statements?

Trigger the collapse of the Turkish Lira, which constitutes a de facto act of financial warfare directed against Turkey.

Those who had advanced knowledge of Trump’s statements (“inside information”) are making multibillion dollar profits on the foreign exchange markets. (This is an issue for further investigation)

An earlier statement by Trump regarding sanctions directed Russia was conducive to a significant decline in the Russian Ruble.

Don't Fall for the Alt-Media Narrative on Armenia and Azerbaijan

Are Russia and Turkey on a Collision Course?

The Paradox of Syria: What to Expect Next from Key Players
Opinion
IranRussiaTurkeyUS