By initiating an attack on the Syrian province of Latakia, home to the Russia-operated Khmeimim Air Base, Israel, France and the United States certainly understood they were flirting with disaster. Yet they went ahead with the operation anyways.

On the pretext that Iran was preparing to deliver a shipment of weapon production systems to Hezbollah in Lebanon, Israeli F-16s, backed by French missile launches in the Mediterranean, destroyed what is alleged to have been a Syrian Army ammunition depot. 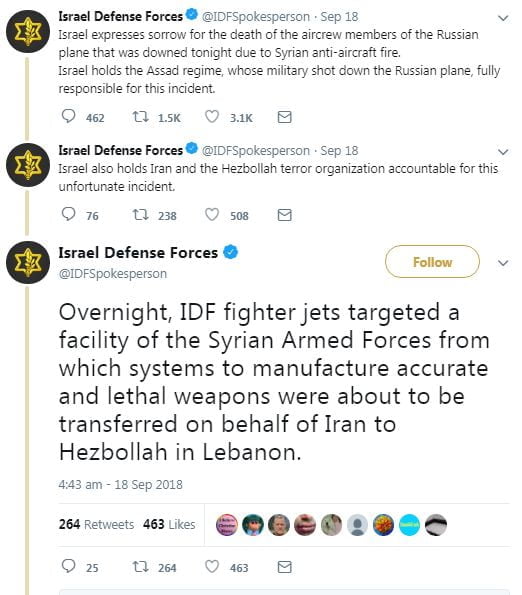 What happened next is already well established: a Russian Il-20 reconnaissance aircraft, which the Israeli fighter jets had reportedly used for cover, was shot down by an S-200 surface-to-air missile system operated by the Syrian Army. Fifteen Russian servicemen perished in the incident, which could have been avoided had Israel provided more than just one-minute warning before the attack. As a result, chaos ensued.

Whether or not there is any truth to the claim that Iran was preparing to deliver weapon-making systems to Hezbollah in Lebanon is practically a moot point based on flawed logic. Conducting an attack against an ammunition depot in Syria – in the vicinity of Russia’s Khmeimim Air Base – to protect Israel doesn’t make much sense when the consequence of such “protective measures” could have been a conflagration on the scale of World War III. That would have been an unacceptable price to achieve such a limited objective, which could have been better accomplished with the assistance of Russia, as opposed to NATO-member France, for example. In any case, there is a so-called “de-confliction system” in place between Israel and Russia designed to prevent exactly this sort of episode from occurring.

And then there is the matter of the timing of the French-Israeli incursion.

Just hours before Israeli jets pounded the suspect Syrian ammunition storehouse, Putin and Turkish President Recep Erdogan were in Sochi hammering out the details on a plan to reduce civilian casualties as Russian and Syrian forces plan to retake Idlib province, the last remaining terrorist stronghold in the country. The plan envisioned the creation of a demilitarized buffer zone between government and rebel forces, with observatory units to enforce the agreement. In other words, it is designed to prevent exactly what Western observers have been fretting about, and that is unnecessary ‘collateral damage.’

So what do France and Israel do after a relative peace is declared, and an effective measure for reducing casualties? The cynically attack Syria, thus exposing those same Syrian civilians to the dangers of military conflict that Western capitals proclaim to be worried about.

Although Israel has taken the rare move of acknowledging its involvement in the Syrian attack, even expressing “sorrow” for the loss of Russian life, it insists that Damascus should be held responsible for the tragedy. That is a highly debatable argument. 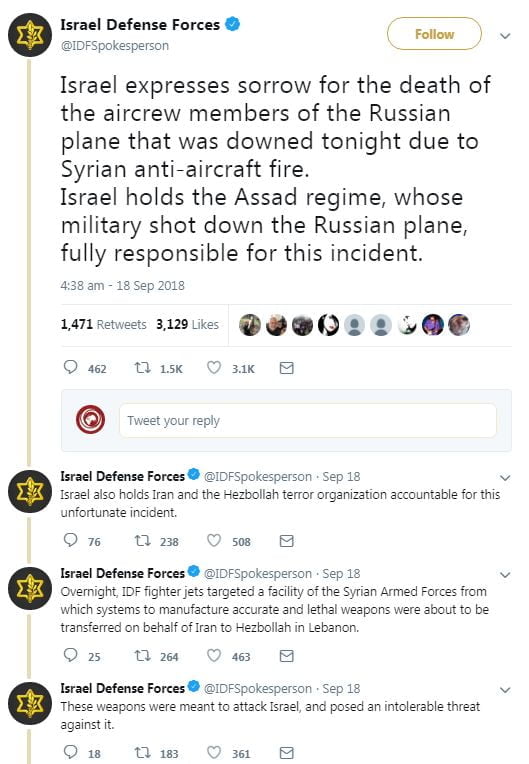 By virtue of the fact that the French and Israeli forces were teaming up to attack the territory of a sovereign nation, thus forcing Syria to respond in self-defense, it is rather obvious where ultimate blame for the downed Russian plane lies.

“The blame for the downing of the Russian plane and the deaths of its crew members lies squarely on the Israeli side,” Russian Defense Minister Sergey Shoigu said. “The actions of the Israeli military were not in keeping with the spirit of the Russian-Israeli partnership, so we reserve the right to respond.”

Russian President Vladimir Putin, meanwhile, took admirable efforts to prevent the blame game from reaching the boiling point, telling reporters that the downing of the Russian aircraft was the result of “a chain of tragic circumstances, because the Israeli plane didn’t shoot down our jet.”

Nevertheless, following this extremely tempered and reserved remark, Putin vowed that Russia would take extra precautions to protect its troops in Syria, saying these will be “the steps that everyone will notice.”

Now there is much consternation in Israel that the IDF will soon find its freedom to conduct operations against targets in Syria greatly impaired. That’s because Russia, having just suffered a ‘friendly-fire’ incident from its own antiquated S-200 system, may now be more open to the idea of providing Syria with the more advanced S-300 air-defense system.

Earlier this year, Putin and Israeli Prime Minister Benjamin Netanyahu reached an agreement that prevented those advanced defensive weapons from being employed in the Syrian theater. That deal is now in serious jeopardy. In addition to other defensive measures, Russia could effectively create the conditions for a veritable no-fly zone across Western Syria in that it would simply become too risky for foreign aircraft to venture into the zone.

The entire situation, which certainly did not go off as planned, has forced Israel into damage control as they attempt to prevent their Russian counterparts from effectively shutting down Syria’s western border.

On Thursday, Israeli Major-General Amikam Norkin and Brigadier General Erez Maisel, as well as officers of the Intelligence and Operations directorates of the Israeli air force will pay an official visit to Moscow where they are expected to repeat their concerns of “continuous Iranian attempts to transfer strategic weapons to the Hezbollah terror organization and to establish an Iranian military presence in Syria.”

Moscow will certainly be asking their Israeli partners if it is justifiable to subject Russian servicemen to unacceptable levels of danger, up to and including death, in order to defend Israeli interests. It remains to be seen if the two sides can find, through the fog of war, an honest method for bringing an end to the Syria conflict, which would go far at relieving Israel’s concerns of Iranian influence in the region.