Will the Battle of Idlib Start while Russian Task Force Is in the Mediterranean?

Russia has amassed large naval and air forces in the Mediterranean opposite the Syrian coast under the command of the Russian Navy commander Admiral Vladimir Korolev. 25 warships and 30 aircraft are involved in these extensive maneuvers: Tu-160 bombers, Tu-142s, II38 anti-submarine, Su-33s and Su-30SMs, and other aircraft. The drill is announced to end one day after the Tehran Summit between presidents Vladimir Putin, Recep Tayyip Erdogan, and Hassan Rouhani, to decide the fate and outcome of the battle of Idlib. This may indicate that Russia is about to provide huge firepower for the Syrian Army offensive in the north of Syria against jihadists, thus creating a shield for the dissuasion of a possible US tactical attack against Damascus.

Sources close to the leadership command in Syria said that there is no doubt that the battle of Idlib will take place, regardless of US threats. It will be divided into several steps. The first objective is to ensure the safety of the Russian Hameymeem military base on the Syrian coast that has been subject to several armed drone attacks, carried out by al-Nusra, aka Hay’at Tahrir al-Sham (HTS), the ex-al Qaeda in Syria, as claimed by Russia. This makes the rural Latakia area the first objective, followed by rural Idlib. Turkey has offered substantial information which has been added to Syrian intelligence and Russian information gathering. This has created a bank of objectives against HTS, Tanzim Hurras al-Deen (THD) and all the other jihadists and foreign fighters in the city and its rural area.

According to the sources, Jisr al-Shughur, Khan Shaikhoon, Saraqeb and Sahl al-Ghab are the favorite initial objectives to be targeted by the Syrian army and Russia to dislodge and eliminate jihadists in these locations, with Turkish approval.

Turkey has classified HTS as a terrorist organization: however, it is still trying, to date, to convince its leader Abu Mohammad al-Joulani, an ex-ISIS (ISIL/Daesh) Emir, to dissolve its group and join, with his 12 to 15,000 men, the pro-Turkish groups in the north. Turkey also asked Joulani to detach himself from all foreign fighters so that the city of Idlib can be spared the assault, since Damascus is determined to recover every inch of Syria, including Idlib.

The Turkish-Syrian relationship has moved out of its critical stage to a less aggressive phase. Indeed, Foreign Minister Waleed al-Moallem has said: “Damascus is not aiming to confront Turkey”. This is the first non-aggressive statement by the Syrian authorities towards Turkey since the start of the seven years of war imposed on Syria. Even those who financed, facilitated and supported the war (i.e. Saudi Arabia) are shifting from their original positions. Moallem sent a positive signal to his Saudi counterpart Adel al-Jubeir, who had endlessly repeated throughout these years that “Assad should stand down by peaceful or by military means”. All the signs indicate that Syria is recovering and slowly coming out of the state of war, with only small pockets remaining in the north, equivalent to around a third of the country’s geography but occupied by less than 10% of the estimated total Syrian population before the war.

Moreover, Ankara confirmed to Russia its intention to pull out of Syria once a political solution is offered to those who fought against the Syrian Army and are now under Turkish mentoring. Moscow and Damascus have been informed of the Turkish intentions and appreciate its effort to facilitate the elimination of all jihadists in the north. Ankara is willing to let go of these jihadists, force them to leave or to face death.

In the middle of all these preparations, the US establishment takes every opportunity to threaten the Syrian government, taking the side of the jihadists and the city of Idlib that was once described by the US president envoy Burt McGurk as the “largest concentration of al-Qaeda since 9/11”. It is therefore unclear why the US is protecting al-Qaeda who is supposed to be considered one of its most lethal enemies.

Indeed, US Secretary of State Mike Pompeo said “Sergei Lavrov is defending the Syrian and Russian assault on Idlib. The US sees this as an escalation of an already dangerous conflict”. Pompeo has failed to take into account, yet again, the fact that Syria is a sovereign state. As such it is unwilling to keep al-Qaeda in a safe haven on its territory and it is therefore in need of eliminating the threat from these experienced ideologues and dangerous jihadists aiming to establish an Islamic Emirate where, under their rule, there would be no room for secular or other religions.

Pompeo also said that Idlib hosts “3 million Syrian refugees” whereas the head of the UN’s humanitarian task force for Syria Jan Egeland said there are “2 million in the city of which more than half are displaced persons”, including foreign fighters and their families. 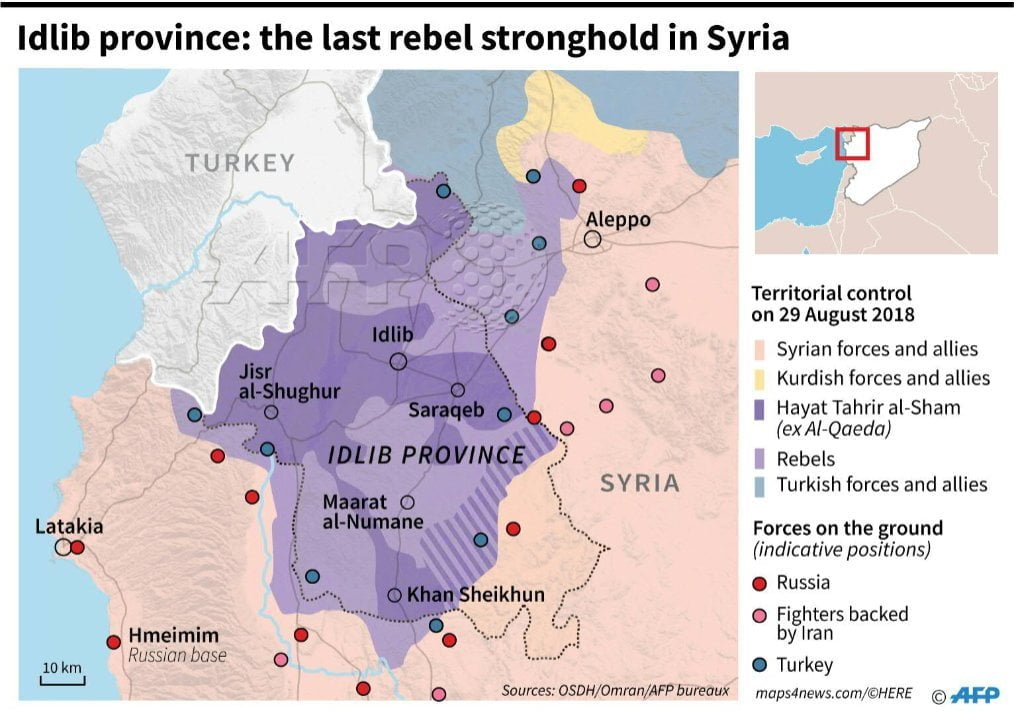 The most surprising statement was pronounced by the UN Special Envoy for Syria, Staffan De Mistura, who offered to “personally escort residents of Idlib to safety” in any attack. “There is no other Idlib, where they can go…?”. What Di Mistura failed to acknowledge is that, in fact, the Syrian and Russian armies have established safe corridors used already by thousands of inhabitants but then blocked by jihadists who imprisoned any Syrians willing to reconcile with government forces or leave the city while under jihadist control. Moreover, Di Mistura didn’t clarify or state whether the UN is willing to take all jihadists, including al-Qaeda, to a safe place outside Syria. It is unclear exactly why the US and the UN are offering al-Qaeda and similar jihadists and foreign fighters either protection (by wanting to stop any attack on their stronghold) or safe passage, and to where.

Russia is determined to help Syria eradicate jihadists, as Waleed Moallem said, and to prevent these from returning home, particularly when many of these are Russian nationals: “This abscess needs to be liquidated”, said Lavrov. Moallem said, “the army will try to avoid civilian casualties”. This is an impossible objective for the US: even when using precision bombs they have killed around 6,000 civilians so far in Syria and Iraq in the recent years.

US bombing against Syrian objectives is highly unlikely to change the power dynamic in the Levant. Russia is determined to stand against any US aggression against Syria, while its army is engaged in regaining control of the country and eliminating jihadists. Now it must be borne in mind that President Trump is facing an internal struggle which profoundly questions his leadership of the country. Therefore, an attack against Syria which flirts with warlike hostility against Russia may give him space to breathe for a little while. Nevertheless, no one can predict the ultimate consequences of two superpowers operating so closely with their significant military apparatus in such a small area of the Middle East. One thing, however, is predictable: Syria will regain its control over Idlib sooner or later, come what may.