The U.S. military would be able to handle itself adequately in a single major regional conflict while maintaining smaller operations around the globe, but its “marginal” capabilities mean America would struggle if forced to take on a second major conflict at the same time, a new report has found.

That is the conclusion of The Heritage Foundation’s 2019 Index of U.S. Military Strength, which offers reviews of the past year’s defense-policy issues. The index looks at both the global operating environment and an internal assessment of U.S. military strength. As in previous years, all topics are rated on a five-point scale: “very weak,” “weak,” “marginal,” “strong,” and “very strong.”

Defense News was given an exclusive interview with Heritage expert Dakota Wood, who edited the nearly 500-page report, ahead of its formal release. The full report can be read here.

On the whole, the report sees progress over the last year in bringing some new equipment into the force, filling gaps in manpower, and rebuilding some stocks of munitions and repair parts. But broader problem trends persist in force readiness, declining proficiency in key areas like trained pilots, and continued uncertainty across the defense budget.

The report concludes that to fix everything plaguing America’s military would take a decade or more of increased funding, something Wood acknowledged may be easier said than done.

“FY19 is now the ceiling. It’s not the floor to build from,” Wood said. “What folks on the Hill and OMB and others are looking at is the domestic political situation … to argue for even more spending on defense is just politically not a real viable prospect. Because you’re talking about a future danger.”

On the whole, the authors conclude that the threat to U.S. interests from abroad remains “high,” as America faces challenges from what the Pentagon has deemed the “4+1 threats” — Russia, China, North Korea, Iran and terrorism.

The biggest change to the operating environment, said Wood, is a positive one: that partners have in the last year truly “awakened to the fact that everybody is back in big power competition.”

“If you’re a European country, you have finally gotten serious in your intellectual awareness of the challenge Russia presents. If you’re South Korea and Japan, you’ve had to get serious about what to do with China,” he said. “Recognizing a problem and actually doing something to deal with that problem are two different issues, but if you don’t have the recognition, your actions are never going to change.”

Out of the state actors challenging the United States, only North Korea has become more benign, as a result of outreach efforts in the last year by the Trump administration. But the report sees no downgrading in North Korean capabilities, with the nation having done “little if anything to dismantle its nuclear weapons program.” 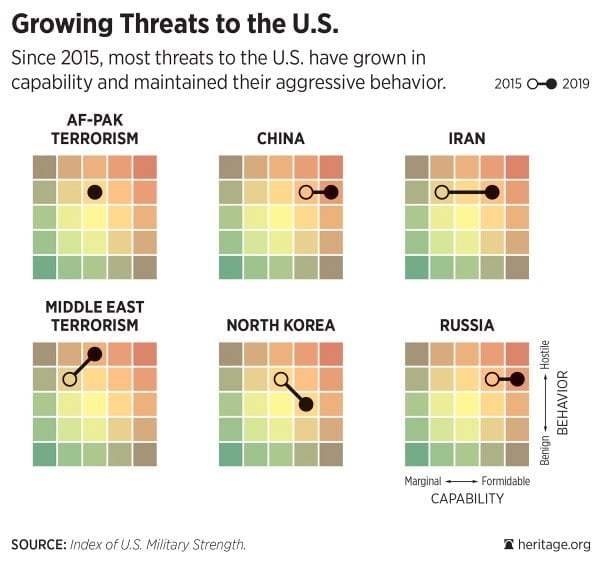 In contrast, China has become more aggressive in the last year, while the report finds no change in Russia or Iran’s capabilities nor stance towards the United States. And when looking at non-state actors, threats from Afghanistan-Pakistan based groups have gone down while groups in the Middle East have ratcheted up their activities against the United States even as their capabilities remain steady.

That last point seems to go against the common wisdom that the Islamic State group has been degraded significantly in the last year. Wood agrees that ISIS has taken a hit, but he says the assessment reflects shifts in the same threat category.

“You might have one group that goes down, like the Islamic State, but Hezbollah might be on the rise, so there’s kind of a balancing effect when you give an overall score,” he said. In addition to Hezbollah, that score includes al-Queda, Hamas and al-Nusra, among others.

Despite all that, Heritage concluded that the global operating environment for the United States remains favorable, the result of strong military alliances in both Europe and Asia, with partners in both regions increasing their defense spending year over year.

The index gauged America’s armed forces as “marginal” in their ability to win wars against two major adversaries simultaneously, a scenario that the study authors deem the key yardstick for determining what the nation needs. The report judges each service in three categories – capacity, capability and readiness – before offering a final score.

In the report, Heritage calls for an Army of 50 brigade combat teams, a Navy of 400 ships and 624 aircraft, an Air Force of 1,200 fighter/attack aircraft and a Marine Corps of 36 battalions. In reality, the Pentagon’s numbers fall well short of that, even in the department’s most optimistic dreams.

Overall the report gives the Army, Air Force and Navy a “marginal” grade, essentially a C. That’s actually good news for the Army, which rose from “weak” in the previous index, a change driven entirely by improvements in readiness, which moved from “weak” to “strong” — the only positive ranking among all the American military service categories.

In last year’s version of the index, just one-third of the 31 brigade combat teams were assessed as being at acceptable levels of readiness, with only three BCTs at full readiness. That increased to 15 BCTs at acceptable levels, with eight fully ready – better, but still below the two-thirds mark that the Army has said it wants.

Wood credits Secretary of Defense Jim Mattis directly for that change, noting “Mattis comes in, during his testimony he says he was ‘shocked’ at the extent which the military had declined in readiness,” Wood said. “To me, that was a big signal.”

Unlike the other services, where readiness is tied directly to systems, Wood said the Army has been able to quickly change the focus of its training to make it more relevant – something possible because of the dwell-deploy ratio allowing solders more time stateside.

“Based on the capacity of the Navy and Air Force, the number of pilots and airplanes and ships, [the current] operational dynamic is more strenuous on those services,” Wood said. “And so it’s more difficult for them to catch up on maintenance, to affect the kinds of training they need and to be confident in the air.” 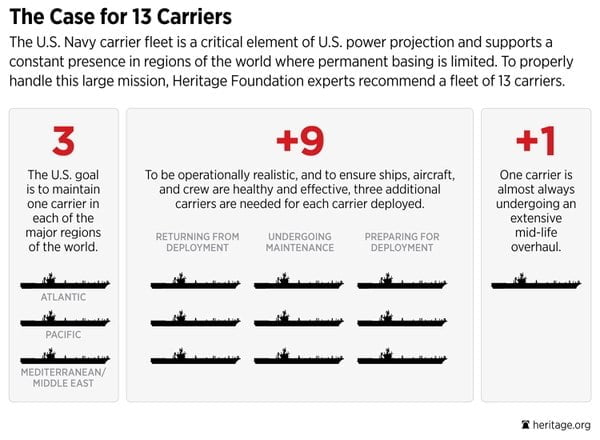 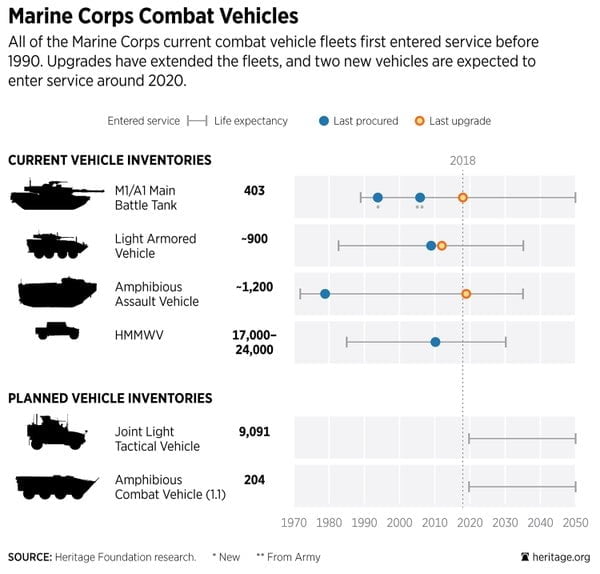 The Marines once again received a “weak” grade, as the Corps’ small size mixed with low readiness of its aviation assets and a shortage of amphibious capabilities combined in a negatively potent package.

The report also looks at America’s overall nuclear capabilities. It found that while delivery platform reliability has gone down due to the continued aging of systems like the B-52 and the Minuteman III, allied assurance has actually increased in the last year as the result of the U.S. investing in new nuclear capabilities.

“If I’m Germany or England or Japan and I’m really concerned about Russia or China, I want to be reassured that the nuclear umbrella is viable, is recommitted to being there for us,” Wood said. “The perception of our allies is the United States will continue to be there and that we’re making necessary investments in maintaining a viable nuclear deterrent capability. Their confidence level is higher now this year than it was last year.”