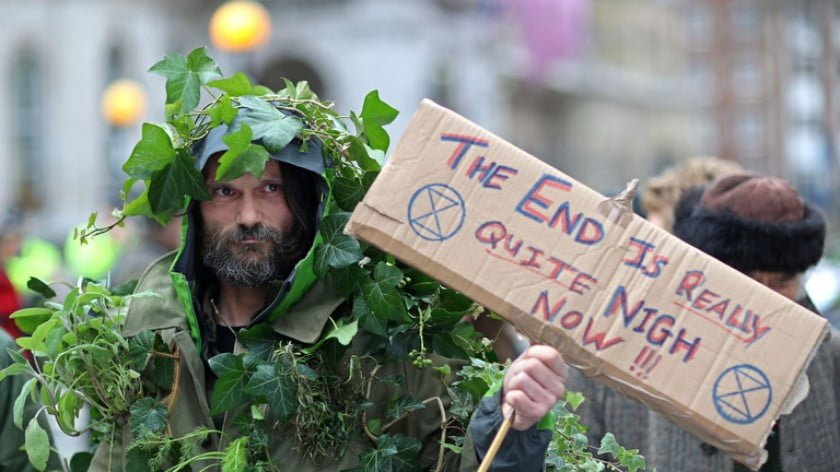 Amid growing climate change concerns what politicians fear most is not standing up to the coal and oil industries but having to tell the people that they need to buy and consume less.

As two hundred nations gathered in Poland to discuss climate change the opening comments of David Attenborough went global across the world’s media.

“Right now we are facing a man-made disaster of global scale, our greatest threat in thousands of years… climate change… If we don’t take action the collapse of our civilisations and the extinction of much of the natural world is on the horizon… Leaders of the world, you must lead. The continuation of civilisations and the natural world upon which we depend is in your hands,” said Attenborough.

He went on to recommend that ordinary people make a change every day by using public transport and other measures to reduce carbon emissions.

Scientists are now warning that we need to increase our actions to tackle climate change by at least five times, merely to stop the increase in temperature going above 1.5 centigrade.

It’s not just temperatures that threaten our existence. Since 1970, we have wiped out 60 percent of birds, mammals, reptiles and fish across our planet. This information comes from a World Wildlife Fund report which drew on the evidence of 59 scientists around the world.

The report warns that the rapid increase in the waste of food and other resources is wiping out the web of life on which our society depends for clean air and water. The director of science and conservation at the WWF, Mike Barrett, warned that we “are sleepwalking towards the edge of a cliff.”

He pointed out that a similar 60 percent wiping out of the human population would be the equivalent of killing every human in Europe, China, Africa and the Americas. He went on to warn that nature is not just nice to have but it is our life support system.

The simple fact is we are running out of time and unless we find ways to restore our eco systems and tackle climate change we face the prospect of humanity’s extinction by the end of the century. Since the dawn of civilisation we have destroyed eighty-three percent of all mammals and half of all plants and it could take millions of years for the world to recover.

The WWF report pointed out that the main cause of wildlife loss is the destruction of natural habitats, mainly to create new farmland. Three quarters of all the land on our planet has now been affected by our activities. Here in Britain, we have seen the loss of most of our wildlife and we have less biodiversity than a hundred and eighty-eight other nations.

Although politicians at their conferences keep agreeing to limit the rise in the earth’s temperature to two degrees centigrade and if possible just 1.5 degrees by the end of this century. This would still mean the destruction of all our coral reefs which play a vital part in sustaining the population of fish. There will also be rising sea levels and increasing violent weather events.

This year’s storms have devastated South Korea, Vietnam, the Philippines and Tonga. Hurricanes also caused widespread damage in the USA and wildfires erupted in California, Canada and Greece, claiming many lives. In Kerala, India nearly one and a half million people were forced out of their homes by violent floods, which also occurred in East Africa and Japan.

In the last one hundred years the amount of carbon dioxide in our atmosphere has gone up by a third. The increase in greenhouse gas emissions has doubled since 1971, mainly caused by industrial activity.

The UK’s Met Office [national weather service] has warned that rising sea levels and climate change threaten over one and a half million homes with the prospect of farmland being turned into marshes and beaches washed away by the end of the century.

The UK Climate Projections recent report predicted the sea around our shores will have risen by between three and four feet by the end of the century, putting 1.7 million homes at risk.

Many coastal towns will have to be abandoned, with large parts of the counties of Kent, Somerset and Essex being submerged under the sea. The worst example is that the sea could now extend so far into Britain that it could overwhelm the city of Cambridge.

The rise in sea level would leave 100,000 coastal homes and other buildings at risk, with another 100,000 vulnerable to collapse from landslides.

The report warns that, unless we reduce our emissions, the temperature will have risen by four degree centigrade by the end of the century, with melting glaciers and ice caps overwhelming the Thames Barrier and flooding London.

But it’s not just here in London that we are at risk. Houston, Shanghai and Jakarta are increasingly vulnerable to storms and flooding. The charity Christian Aid warned in its recent report that city planners are failing to prepare for what is coming. Most of our biggest cities are built close to the coast or by large rivers and all are now at risk.

In 2015, 195 countries meeting in France agreed to keep global warming below two degrees. But the US has now announced it intends to withdraw from this agreement, and here in Britain once of the first actions of the newly elected Tory government back in 2010 was to reduce funding for green energy and has now unleashed a new strategy for a vast increase in fracking across the country.

Even the Tory MP Zac Goldsmith has warned his government of the risk of a political backlash. The fracking near Blackpool caused several minor earthquakes which forced the company Cuadrilla to halt operations after a 0.8 magnitude tremor.

In 2017, we saw fifteen deadly weather disasters: heatwaves, floods and droughts. If I think back to the 1960s there would be one or two violent weather events this year, now it’s become a regular part of our news coverage.

In September, Indonesia was struck by a tsunami and an earthquake that killed thousands and left many missing. Given the thousands of lives lost this year with just a one degree increase I dread to think how many more are going to die, even if we cap the increase at 1.5 centigrade.

Even to meet that target carbon, emissions have to be cut by forty-five percent by 2030, but they’re still going up and most of the difficult decisions that should have been taken at the Poland conference have been deferred to the next meeting.

Although the US has a climate change denying president, latest opinion polls show that eighty percent of Americans believe climate change is happening, including a majority of Republicans.

Nicholas Stern, who cooperated with me when I was mayor of London and is author of a landmark report on climate change economics, said: “It is clear that the progress we are making is inadequate given the scale and urgency of the risks we face… a much more attractive clean and efficient path for economic development and poverty reduction is in our hands.”

It was twenty-six years ago, in 1992, that the UN Framework Convention on Climate Change was signed, binding governments to a commitment to reduce the level of carbon emissions. Yet, now a quarter of a century on, even if we achieve the target set by those governments, the world’s temperature will increase by more than three degrees centigrade.

It’s not just that politicians lack the courage to stand up to the coal and oil industries but what they fear most is having to tell all of us that we need to buy and consume less. A third of all the food used in Europe and North America ends up wasted and thrown away. More and more of the things we buy are just left in our cupboards and drawers until they are eventually thrown out.

I grew up in that post-war world where nothing was wasted and our pleasure came from the time we spent with our friends and family, but over these last fifty years the Western world has switched to an obsession with shopping and consumption and we spend less time with our friends and our family. We can either go back to that world without waste or we are going to destroy the world of our children.