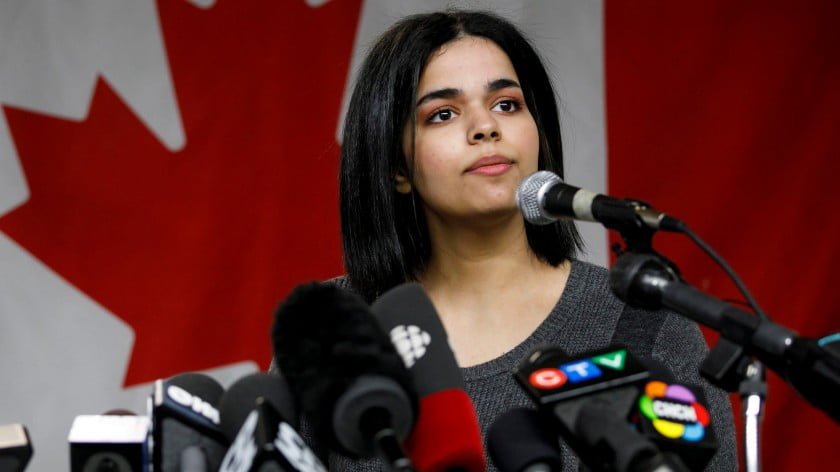 18-year-old Saudi citizen Rahaf al-Qunun ran away from her family during a vacation in Kuwait after boarding a flight to Thailand where she planned to transit en route to Australia after asking for asylum. She claimed that her family physically and mentally abused her and that she’d face certain death if she returned home after she said that she renounced Islam, which is a capital offense in her country. Thai officials tricked her into giving up her passport at one point in time but later returned it after she sought refuge in an airport hotel and began live-tweeting her predicament. Their stance is that al-Qunun didn’t have any return tickets, hotel reservations, or travel itinerary and was therefore suspected of breaking Thai laws, but she suspected that Saudi officials tried to secretly intervene and silently secure her extradition.

Nevertheless, her social media activity caught the attention of UN officials, and it was eventually determined that she’d be given asylum in Canada, which has had a tense relationship with Saudi Arabia since last summer’s tiff over the Kingdom’s humanitarian conduct and was therefore a natural country to accept her. Foreign Minister Chrystia Freeland welcomed her off the plane and introduced her to her new compatriots as a so-called “brave new Canadian”, controversially setting the precedent that anyone who renounces Islam and alleges to be a victim of domestic violence could potentially receive asylum. Apart from the obvious domestic political implications that this could have ahead of Prime Minister Trudeau’s plan to admit one million immigrants in the next three years, it can also encourage socially disruptive and strategically motivated out-migration from Muslim countries.

Saudi Arabia first and foremost comes to mind because of the far-reaching socio-cultural and economic changes being presided over by Crown Prince Mohammed Bin Salman as part of his ambitious “Vision 2030” reform policy. The proverbial genie is out of the bottle and the Kingdom’s majority-youthful population is already well acquainted with Western styles and mores, hence one of the reasons why their future leader is undertaking such profound reforms in the first place but also making some of them susceptible to outside suggestions that they agitate to accelerate the pace thereof. Al-Qunun’s new life in Canada could be weaponized as an example by foreign forces who want to inspire young Saudis – and especially women—to protest in favor of a Canadian-like lifestyle inside of their country, which could exacerbate the emerging fault lines within society.

Many Muslim countries are undergoing a period of rapid change brought about by the unavoidable Western liberal influences that entered their traditionally conservative societies as a result of globalization, and while some states are pushing back against these by enacting certain standards prohibiting various acts, others such as Saudi Arabia are progressively opening up and cautiously embracing these changes at a pace that’s comfortable for their societies. The external acceleration of this very sensitive process could be extremely disruptive, destabilizing a broad swath of states for what might be geostrategic ends. Al-Qunun is also playing into this paradigm – whether deliberately or unknowingly – by calling on other women to follow in her footsteps after she declared that her story might be a so-called “agent of change” that encourages them to flee en masse.

That’s not to say that her claims of physical abuse and imminent death at home don’t have any merit, but just that her experience is being exploited in pursuit of political ends by both herself and others.