Reports coming in about China’s new gulag for Muslims seem too awful to believe. But the United Nations and responsible media have revealed that hundreds of thousands of Uighur Muslims from western China – and perhaps as many as one million – have been shut away in a growing chain of prison camps designed to impose ruthless state control over them and crush their culture and religion.

Who are these oddly-named people, China’s Uighurs? Their homeland lies on China’s far western region next to independent Kazakhstan and Pakistan. The region, as I’ve seen, is arid, hilly and very remote. The Uighurs are a Turkic people of ancient Muslim culture who have nothing in common with China except proximity. Their once independent nation used to be called the East Turkestan Republic before it was invaded and gobbled up in 1949 by Red China and, before that, by the Russian Empire.

A year later, Communist China began invading independent Tibet. China’s aim there was to crush Tibetan national resistance to Chinese rule and wipe out as much as possible of Tibet’s ancient feudal and religious culture. I infiltrated into Tibet in the 1980’s in time to see violent Tibetan demonstrations and riots against the Chinese occupiers. Four decades later, draconian Chinese rule is well on the way to crushing the life out of Tibet’s ancient Buddhist culture.

The same process is happening now in Eastern Turkestan. This strategic piece of real estate is part of the ethnic Turkish Central Asia that includes Kazakhstan, Turkmenistan, Kyrgyzia, Uzbekistan and Tajikistan. Mongolia and Afghanistan are sometimes included. In the late 19th century, there arose the Pan-Turkic movement in Turkey that sought to unite Central Asia under the guidance of Istanbul. But in the end, the Russian Empire and China occupied Central Asia until the collapse of the Soviet Union. Today, China is the last remaining colonial master.

The Uighurs, a forgotten people, have been protesting and resisting Chinese rule since the late 1940’s. Beijing has always seen Islam as a challenge to its absolute rule. Uighur resistance has been limited and ineffectual. But Beijing had a big scare when the US CIA set up camps in Afghanistan in the late 1970’s to train Uighurs into an anti-Chinese guerrilla force for use in a potential future US-China war. When the US invaded Afghanistan in 2001, the former CIA training camps for Uighurs were brazenly called ‘Islamic terrorist training camps’ and blamed on Osama bin Laden’s al-Qaida.

China has set about uprooting Muslim culture and identity. Religious devotions, beards and traditional Islamic dress, the Uighur language itself, and historic customs are banned. Communist party members are billeted in the home of Uighurs to keep a wary eye on them. Schools are run by Chinese officials; Uighur movements are restricted; mosques are shuttered.

Over the past year, China has reportedly been building what are officially called ‘re-education’ centers in the region. The UN reports that up to one million Muslims have been locked away in these modern gulags, surrounded by barbed wire and watch towers. China’s prison complex, known as ‘laogai,’ covers the nation, but the Muslim gulag appears particularly brutal and intimidating. Of course, a million Muslims in China’s prisons pales in comparison to the two million, mostly blacks, in US state and federal prisons (though none are charged with religious crimes).

China’s strategy in Tibet and Eastern Turkestan has been what I call ‘ethnic inundation.’ Han Chinese are brought in from afar to settle Muslim and Buddhist lands, relentlessly swamping the local population who become a policed minority. Interestingly, Israel has been following the same policy on the West Bank and Golan. Gaza has been turned into a giant, open-air prison for Palestinians. China’s Turkestan gulag may surpass Gaza in the number of prisoners it holds. Unsurprisingly, China rarely criticizes Israel for its repression of Palestinians.

The Muslim world has done next to nothing to protest the fate of the Uighurs. Only Turkey, one of the few Muslim nations with self-respect, is strongly rebuking China and giving refuge to Uighur refugees. Those self-proclaimed ‘defenders of the faith,’ Saudi Arabia, have been mute to the oppression in Turkestan – as mute as they have been to the savage mistreatment of Myanmar’s Rohingya Muslims, 800,000 of whom are now living in awful condition in Bangladesh.

As with the sordid murder of Saudi writer Khashoggi by Saudi agents, few dare rebuke the rich perpetrator of the crime. No one wants to be on China’s blacklist. 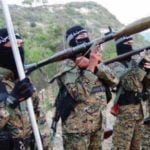 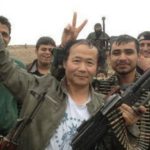 How Xinjiang “Interferes” with the EU-China deal

Jinping Takes Up the US Challenge