Egyptian president Abdel Fattah el-Sisi has been busy on the international circuit. One weekend it’s the Munich Security Conference, where he tells his German hosts he will not appear on the same stage as the Emir of Qatar.

The next it’s his country’s resort town Sharm el Sheik, where he hosts the first league of EU and Arab heads of state. On Sunday, he will parade in front of 20 European leaders.

In preparation for this injection of international legitimacy, Sisi has gone on a killing spree. He has been sending record numbers of detainees to the gallows. Nine young men were hung on Wednesday after a sham trial for the assassination of the public prosecutor Hisham Barakat, bringing the total to 15 in two weeks.

Reprieve, the anti-death penalty rights group, called the executions a “full blown human rights crisis”. Amnesty International called on the Egyptian authorities to halt executions based on confessions obtained under torture. The calls were unheeded. Thirteen other defendants were sentenced to death in absentia in this specific case.

Sisi has gone on a killing spree. He has been sending record numbers of detainees to the gallows

In August 2016, a video appeared of the defendants recanting their confessions in court and recounting how they had been extracted.

Mahmoud el-Ahmadi, aged 23, who was one of the nine executed on Wednesday, told the court: “You can see here. The handcuffs left marks that are still showing after six months. And look at this, this was infected and had pus. The forensic medical examiners are liars.”

“Here, in this court, there is a police officer who was in the prison with us and was torturing us. If you want me to point him out, I will do it.”

“Give me a taser, and I can make anyone here in this court admit to a crime they didn’t commit. We were pumped with electricity. We were electrocuted enough to supply Egypt for 20 years.”

A message to Egypt

Abulqasim Youssef, another defendant executed this week and a student at al-Azhar University, told the court he had been blindfolded, hung on the door upside down for seven consecutive hours, and electrocuted “in sensitive areas of my body”.

The hangings were a message to Egypt. Sisi is telling Egyptians he can do whatever he wants to whomever he wants and get away with it on the international stage.

The hangings were a message to Egypt. Sisi is telling Egyptians he can do whatever he wants to whomever he wants and get away with it on the international stage. It is the exact opposite of the message that French president Emmanuel Macron intended to convey when he said that security could not be separated from human rights.

These executions are only the start. According to egyptfront.org, 46 people were executed in 2018, and 737 were facing death sentences. Fifty one cases had reached the final stage, meaning that there was no further appeal in court.

By the start of this year, 65 people, including those sentenced since 2013, were on death row awaiting execution. Fifteen of these have been killed, which means 50 have yet to be executed.

If there is a difference between the legitimacy Sisi is accorded from the EU and the boost he receives from Donald Trump, who called him a “great guy”, I would love some member of the EU’s External Action Service to explain to me what it is.

In going to Sharm el Sheikh this weekend they are endorsing, consciously or not, the worst dictator Egypt has seen in modern times. In bolstering Sisi, European leaders are playing an active part in Egypt’s destabilisation. Tusk, Juncker and the 20 heads of state who have signed up to the event, are nothing less than Sisi’s useful idiots.

The current crackdown in Egypt is political. It has nothing to do with terrorism or security. It is designed to crush any opposition to a constitutional amendment which will vastly increase Sisi’s term of office and his powers as president.

The constitutional amendment will extend the presidential term from four to six years and a separate provision would let the current president run for office at the end of his current term. It would place the armed forces above the constitution by “safeguarding the constitution and democracy, maintaining the foundations of the state and its civilian nature, the gains of the people, and the rights and freedoms of the individual”. It would hand the appointment of key positions in the judiciary to the president, and it would create a second parliamentary chamber, one third of whom would be appointed by the president.

These constitutional changes are so important to Sisi that he has put his son, Mahmoud, in charge of their implementation. According to Mada Masr, Mahmoud el-Sisi, a senior official in the General Intelligence Service, convened nearly daily meetings to co-ordinate plans to extend his father’s terms.

Now compare these powers to the ones deposed president Mohammed Morsi took in November 2012 when he temporarily put his decisions beyond legal oversight until a new parliament was in place.

It was a fatal mistake, taken at the height of his popularity, and the start of the collapse of his rule, but it was later revealed that Morsi was attempting a pre-emptive strike against a move by the Constitutional Court to suspend a proposed constitutional referendum due to take place three weeks later. Morsi’s decree was botched, but even taken at face value, the decree was time-limited.

Sisi’s constitutional amendment is built to last for decades.

Sisi is a dictator for slow learners. Morsi’s ouster was applauded by liberals who took part in Tahrir Square. One of them, Mamdouh Hamza, said the following about Morsi’s constitutional declaration: “If you don’t protest against the declaration, we will be ruled for 30 years by their shoes. And whoever speaks out against them [Muslim Brotherhood] will be labelled counterrevolutionary. He doesn’t want any other voice. He is placing himself in the same level as God.”

Hamza described the 30 June demonstrations against Morsi as the “real revolution” and sponsored a 400 metre long banner calling on Morsi to quit. Morsi and his government were “an illusion”. “I do not know any of them. They are poisons. We will take them out of our bodies on 30 June,” Hamza said.

The current crackdown in Egypt is political. It has nothing to do with terrorism or security

Hamza actively encouraged the dispersal of Rabaa Square and Nahda Square sit-ins, which became the worst massacre of civilians since Tiananmen Square.

Another was Khaled Youssef, filmmaker and member of parliament, who was granted exclusive use of a military helicopter to film bird’s eye footage of the protests against Morsi’s rule in June 2013.

Youssef performed the same service to the counter-revolution as Leni Riefenstahl did to Hitler’s Olympic Games in 1936. It was pure propaganda. The footage he filmed included a counter pro-Morsi demonstration, which was conflated with anti-Morsi protests. The images worked. It gave Tony Blair the excuse to claim 30 million people rose up against Morsi, a grossly inflated figure.

At the time, Youssef was on the soap box himself: “We must revolt, and not leave the squares until Morsi and his regime fall. I demand either withdrawing the constitutional declaration, or ousting the regime. We will not engage in any dialogue or discussion. The people are not ready to be enslaved,” he said.

Where are Hamza and Youssef today? Hamza was briefly detained earlier this week on charges of spreading fake news and Youssef is in exile. Youssef does not regret supporting the ouster of Morsi. “The Egyptian people did not revolt twice to nationalise all powers and put them in one man’s hand – no matter how great that man is – or to give him the right to rule until 2034, i.e. for 20 years,” Youssef wrote in a Facebook post.

In the Egypt that Youssef helped create, he risks losing his parliamentary immunity from prosecution and is the target of smear campaigns over leaked sex videos with two actresses. All for speaking his mind. Youssef is officially “on holiday” in France.

He is destined to join a long list of Egyptian exiles. Sami Anan, the former general who dared stand against Sisi in the last elections, has just been sentenced to 10 years in prison.

At the Munich Security Conference, Sisi portrayed himself as the man leading change in the region, in Islam, and bringing tolerance to his country. He is accompanied by statements from the IMF praising Egypt for its 5.2 percent growth rate. With inflation now at over 15 per cent, no one is noticing this growth rate. If you take out the oil sector, the economy shrank for a fourth month in December.

In fact, almost 30 percent of the population are officially recognised as poor, even after lowering the poverty threshold to between 700 and 800 Egyptian pounds a month. If Egypt followed the international definition of extreme poverty, around 1050 EGP a month, their rate would be higher still.

At Sharm el Sheikh, the charade will continue. If you want to know why Western leaders continually get the Middle East wrong, why they choose allies who destabilise once strong and powerful nations like Egypt and reduce them to smouldering embers, why the West is incapable of supporting democracy in the Arab world, you only have to record the statements that will be made by European heads of state at Sharm el Sheikh. Among them will be Theresa May, Britain’s prime minister. 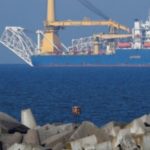