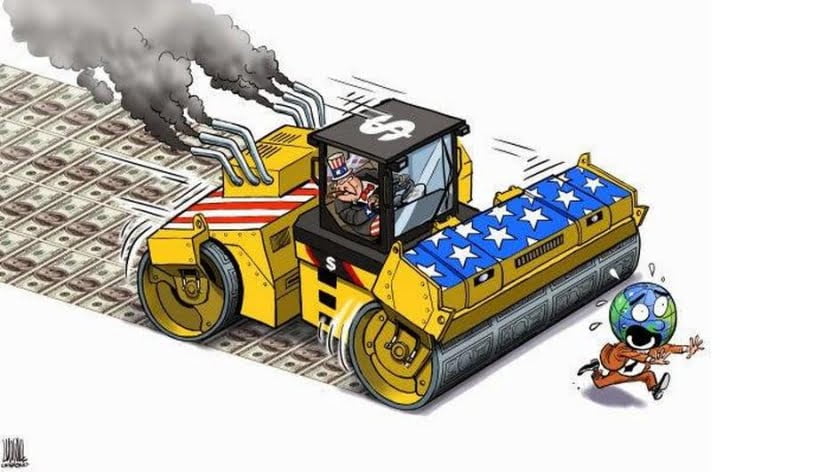 There has been an on-going tectonic shift in the West since the abandonment of the Bretton Woods agreement in 1971. This accelerated when the USSR ended and has resulted in the ‘neoliberal globalization’ we see today.

At the same time, there has been an unprecedented campaign to re-engineer social consensus in the West. Part of this strategy, involves getting populations in Western countries to fixate on ‘global warming’, ‘gender equity’ and ‘anti-racism’: by focusing on identity politics and climate change, the devastating effects and injustices brought about by globalized capitalism and associated militarism largely remain unchallenged by the masses and stay firmly in the background.

This is the argument presented by Denis Rancourt, researcher at Ontario Civil Liberties Association, in a new report. Rancourt is a former full professor of physics at the University of Ottawa in Canada and author of ‘Geo-economics and geo-politics drive successive eras of predatory globalization and social engineering: Historical emergence of climate change, gender equity, and anti-racism as state doctrines’ (April 2019).

In the report, Rancourt references Michael Hudson’s 1972 book ‘Super Imperialism: The Economic Strategy of American Empire’ to help explain the key role of maintaining dollar hegemony and the importance of the petrodollar to US global dominance. Aside from the significance of oil, Rancourt argues that the US has an existential interest to ensure that opioid drugs are traded in US dollars, another major global commodity. This explains the US occupation of Afghanistan. He also pinpoints the importance of US agribusiness and the arms industry in helping to secure US geostrategic goals.

Since the fall of the USSR in 1991, Rancourt says that US war campaigns have, among other things, protected the US dollar from abandonment, destroyed nations seeking sovereignty from US dominance, secured the opium trade, increased control over oil and have frustrated Eurasian integration. In addition, we have seen certain countries face a bombardment of sanctions and hostility in an attempt to destroy energy-producing centres that the US does not control, not least Russia.

He also outlines the impacts within Western countries too, including: the systematic relative loss of middle-class economic status, the rise of urban homelessness, the decimation of the industrial working class, corporate megamergers, rising inequality, the dismantling of welfare, financial speculation, stagnant wages, debt, deregulation and privatisation. In addition, the increased leniency in food and drug regulation has led to the dramatic increase in the use of the herbicide glyphosate, which has been concurrent with upsurges of many diseases and chronic ailments.

In the face of this devastation, Western nations have had to secure ongoing consent among their own populations. To help explain how this has been achieved, Rancourt focuses on gender equity, anti-racism and global warming as state doctrines that have been used to divert attention from the machinations of US empire (and also to prevent class consciousness taking hold). I recently asked Denis Rancourt about this aspect of his report.

CT: Can you say a bit about yourself and how you came to produce this report? What is it meant to achieve?

DR: I’m a former physics professor, environmental scientist and a civil rights advocate. I currently work as a researcher for the Ontario Civil Liberties Association (ocla.ca). During a conversation about civil rights issues I had with the executive director of OCLA, we identified several important societal and economic phenomena that seemed to be related to the early 1990s. So, I eventually settled in to do some ‘heavy lifting’, research wise.

While there is no lack of hired intellectuals and experts to wrongly guide our perception, my research demonstrates a link between surges in large-scale suppression and exploitation of national populations with the acceleration of an aggressive, exploitative globalization.

CT: In your report, you’ve described the consequences of the abandonment of Bretton Woods and the dissolution of the USSR in terms of dollar hegemony, US militarism and the devastating impacts of ‘neoliberal globalisation’ both for nation states and for ordinary people.

There is little doubt that Russian and Chinese analysts have a solid understanding of what I have outlined in my report. For instance, foreshadowing Trump’s trade war, the People’s Liberation Army Major-General Qiao Liang’s April 2015 speech to the Chinese Communist Party’s Central Committee and government office, included the following:

“Since that day [dissolution of Bretton Woods], a true financial empire has emerged, the US dollar’s hegemony has been established, and we have entered a true paper currency era. There is no precious metal behind the US dollar. The government’s credit is the sole support for the US dollar. The US makes a profit from the whole world. This means that the Americans can obtain material wealth from the world by printing a piece of green paper. […] If we [now] acknowledge that there is a US dollar index cycle [punctuated by engineered crises, including war] and the Americans use this cycle to harvest from other countries, then we can conclude that it was time for the Americans to harvest China…”

CT: You discuss the need for states to ensure consent: the need to pacify, hypnotize and align populations for continued globalization; more precisely, the need to divert attention from the structural violence of economic policies and the actual violence of militarism. Can you say something about how the issue of global warming relates to this?

DR: Irrespective of whether the so-called ‘climate crisis’ is real, exaggerated or fabricated, it is clear, from the data in my report, that the ethos of global warming was engineered on a global scale and benefits the exploiters of the carbon-economy and, more indirectly, the state.

For example, one of the studies that I review shows that a many-fold increase in mainstream media reporting about global warming suddenly occurred in the mid-2000s, in all the leading news media, at the same time that the financiers and their acolytes such as Al Gore decided to make and manage a global carbon economy. This media campaign has been sustained ever since and the global warming ethos has been institutionalized.

Carbon sequestration schemes have devastated local communities on every occupied continent. If anything, carbon schemes − from wind farms to biofuel harvesting to industrial battery production to solar-cell array installations to mining uranium to mega hydro-dam construction and so on – have accelerated habitat destruction.

Meanwhile, economic and military warfare rages, glyphosate is dumped into the ecosphere at unprecedented rates (poured on GM herbicide-resistant cash crops), active genocides are in progress (Yemen), the US is unilaterally withdrawing from nuclear treaties and forcing an arms race with next generation death machines and US-held extortionary loans are serviced by land-use transformation on the scale of nations; while our educated children have nervous breakdowns trying to get governments to “act” on “climate”.

In the early-1990s, a world conference on climate environmentalism was an express response to the dissolution of the Soviet Union. This was part of a global propaganda project intended to mask the new wave of accelerated predatory globalism that was unleashed now that the USSR was definitively out of the way.

CT: What are your thoughts on Greta Thunberg and the movement surrounding her?

DR: It is sad and pathetic. The movement is a testament to the success of the global propaganda project that I describe in my report. The movement is also an indicator of the degree to which totalitarianism has taken hold in Western societies; wherein individuals, associations and institutions lose their ability for independent thought to steer society away from the designs of an occupying elite. Individuals (and their parents) become morality police in the service of this ‘environmentalism’.

CT: You also talk about the emergence of gender-equity (third wave feminism) and anti-racism as state doctrines. Can you say something about this?

DR: In my report, I use historical institutional records and societal data to demonstrate that a triad of ‘state religions’ was globally engendered and emerged on cue following the dissolution of the Soviet Union. This triad consists of climate alarmism, exaggerated tunnel-vision focus on gender equity and a campaign of anti-racism focussed on engineering thoughts, language and attitudes.

These processes and ideas served to sooth, massage and occupy the Western mind, especially among the upper-middle, professional and managerial classes and the elite classes of economically occupied territories but did nothing to alleviate the most violent and globally widespread forms of actual racism and misogyny as a result of predatory globalization and militarism.

Ironically, the global attacks on human dignity, human health and the environment were in proportion to the systematic and sometimes shrill calls for gender equity, anti-racism and climate ‘action’. The entire edifice of these ‘state religions’ leaves no room for required conflicts of class and expressly undermines any questioning of the mechanisms and consequences of globalization.

CT: Can you say something about the Gilets Jaunes (Yellow Vests), Brexit and the Trump electoral phenomenon.

DR: Combine aggressive globalization, constant financial predation, gutting of the Western working and middle classes and a glib discourse of climate change, anti-racism and gender equity and something has to give. French geographer Christophe Guilluy predicted the reactions in some detail, and it is not difficult to understand. It is no accident that the revolting working- and middle-classes are critical of the narratives of climate crisis, anti-racism and gender equity; and that their voices are cast by the mainstream media as racist, misogynist and ignorant of science.

It seems that any class which opposes its own destruction is accused of being populated by racist and ignorant folks that can’t see that salvation lies in a carbon-managed and globalized world. It becomes imperative, therefore, to shut down all the venues where such an ‘ignorant lot’ could communicate their views, attempt to organize and thereby threaten the prevailing social order.