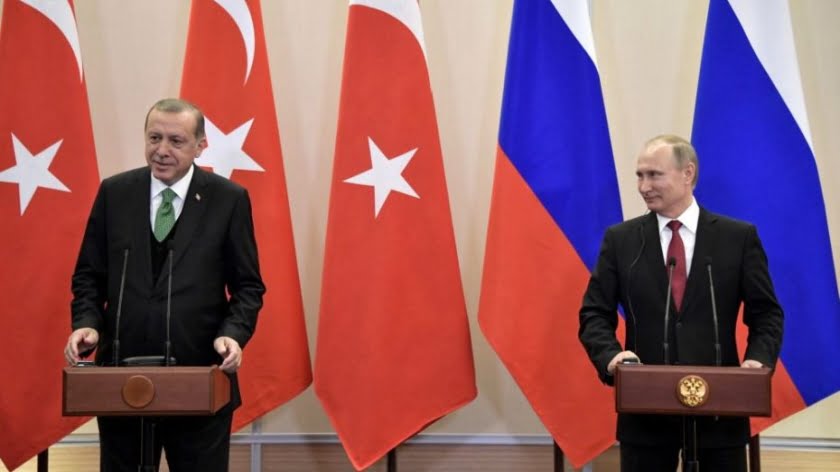 Idlib is burning. The last bastion of the Syria war, which is presently still in the hands of Turkish-backed Al Qaeda groups is slowly falling into the hands of the Assad regime. For many experts, this last scrap is seen as the final stage in the Syrian war which Assad has won, like the last piece of a jigsaw puzzle falling into place. For others though, it feels like the beginning of a new conflict in Syria between regional powers who are doing anything but resolve their differences, despite most Arab countries returning to Damascus with embassies being reopened and a new attitude towards Assad.

‘Assad may be a son of a bitch, but let’s make him our son of a bitch’ seems to be the thinking from Gulf Arab states which is slowly changing the way many countries are changing their views. Soon governments of EU countries will no doubt restore diplomatic relations with the Syrian leader, all in the belief that he could be used as a way of influencing Iran and Hezbollah. It’s not a new idea. In fact, it was exactly the idea championed by Nancy Pelosi in 2007 which led to Assad being brought in from the cold then.

But Idlib, if taken, will create new problems which those powerful nations should mull carefully. For the last two years, it was a region where both refugees and extremists went as a last resort as there was nowhere else to go. Turkey is seen as the odd man out in the region as its loyalty is to neither the East nor the West but to its own slightly delusional ideas of being a hegemony broker in the Middle East.

If Idlib is finally taken by Assad forces and the local Al Qaeda coalition (HTS) has to leave, rather than fight for the last man, then Turkey will be seen as a loser. That creates problems in itself. Will this be taken calmly and pragmatically by its firebrand leader or will there be some kind of military reaction to assert itself on nearby SDF (Kurdish) forces in the North of Syria? And where will the HTS extremists go?

The second question is easier to answer as, almost certainly, they will head to the South of Syria and join their comrades who were allowed to regroup there, with the assistance of the Iranians (yes, Iranians) and join a cluster of ISIL fighters who, for the moment, are being viewed by a salivating Israel which looks at them with pride and joy. Israel and Turkey may be at each others throats but they might find that their own extremists will fuse together into one.

The fall of Idlib will hardly be a victory at all. Indeed, the failure of Russia and Turkey to stick to their own agreements on demilitarized zones surprised no one. Can anyone remember the number of such ‘de-escalation zone agreements which were annulled? Too many have come and gone and probably the US and Russia will have to draw up a fresh one for the South again, once Idlib is taken and Erdogan uses the refugees fleeing as leverage against the West for his needs, whether they be troubled arms deals with Washington or financial issues.

What Idlib will underline is that Syria is not the place to draw up agreements as they are never respected for long. The writing was on the wall though when Erdogan struck the deal and was quoted by western media as saying that his own extremists would not be moved, but merely “deactivated” by himself, temporarily of course. HTS forces in the region are too valuable to Erdogan whose own apologists on live TV have openly admitted to me is a bonafide policy strategy of Ankara in Syria “as this is what the West has been doing from the start”, one explained to me.

Three million Syrians, half of whom arrived as refugees and of 60,000 are fighters, is the real issue. What happens to them and where do they go?

And what can we make of Russia now working hand in hand with the Assad regime on bombing sorties? Originally, when the Idlib deal was struck, Turkey made a big deal about Russia agreeing not to be part of an offensive against its mercenaries. But in recent days, no one is even pretending that Russia is neutral any more. One regional player who will take particular attention of that move will be Turkey’s arch enemy Israel, which has recently been pushing its luck in Syria with a number of bombing runs aimed at Assad military installations. In 2018, when a Russian jet was shot down due to an incident of friendly fire by Assad’s anti-aircraft batteries, which were aiming at Israeli F-16s, Moscow made murmurings about the special deal of allowing Israel a free hand on its bombing, to be off. There was even talk of creating Russian no fly zones and a beefed up anti-aircraft plan and, indeed, since then Assad has received delivery of the much feared Russian S-300 missile system, which has yet to be used against Israeli jets.

Will Russia reengaging on its own Turkey deal signal a new chapter in its protection of its host regime? If that is the case, Israel better curtail its feral campaign in Syria as a downed Israeli F-16 might be all Bolton and Pompeo need to force Trump into a war with Iran, which would be the biggest error in US foreign policy since Lindon B. Johnson sent US forces into Vietnam in 1965.

Idlib is a failure of diplomacy and military planning.

The bombardment of Idlib province and neighbouring areas has killed more than 300 people since late April, according to an EU-sponsored observer based in the UK. It also displaced nearly 270,000 people in May alone, according to the United Nations which claims that a total of 24 health facilities and 35 schools have been hit in the latest escalation.

But we shouldn’t expect a swift victory. The tactic most analysts predict is that Russia has advised President Bashar al-Assad that the best policy is to “chip away” at the area, and not unleash a major assault that would create chaos on Turkey’s doorstep. Expect talk of war crimes cases from both sides soon and reports of more weapons delivered to extremist groups.