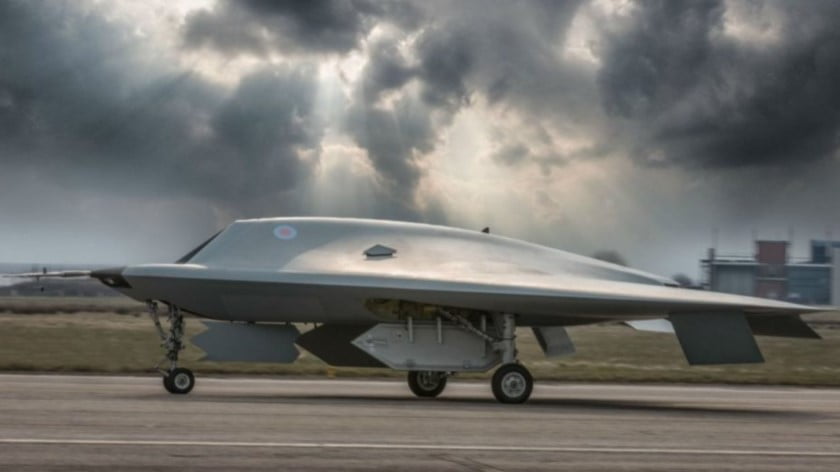 The Cold War perception of space travel as being very human-oriented with man conquering Mars to build the Capitalist or Communist cities of tomorrow has been completely replaced by the reality that drones are much better suited for space exploration than humans. When it comes to military aviation the situation is similar. The strongest and weakest point of any pilot is his brain, which cannot stand the massive gravitational forces that ultra-modern fighter jets are capable of creating. So it is no surprise that at some point the US, Russia and China will unveil a drone big enough and capable enough to replace any current generation bombers and fighters removing the limitations of the human body’s weakness to big gravity from military aviation. And, as of a few days ago the Russians did just that.

The Ministry of Defense of the Russian Federation just released video to the public of a test of their new massive pilotless aircraft called “The Hunter”. This demonstration was conducted while the craft was receiving signals from a human pilot on land, but the Ministry claims they will soon be able to show off its fully-automated capabilities.

The Hunter is a big beast, the largest military “drone” ever produced if it gets put into production, weighing in at 20 metric tons giving it the ability to carry any payload that any other Russian fighter jet can in theory.

The natural media reaction to this unveiling will surely be that of “Russian Aggression” (how dare you snow slaves produce anything other than oil) or “Cold War 2.0” is happening right now (we are all possibly doomed). The latter option is far more relevant and interesting.

Although no one from the realm of journalism or analysis can really tell you the total truth of how the American Military Industrial Complex was able to outdo the Soviet equivalent there is a general view that the American side was able to trick the Russians into vastly overproducing and thus overspending on arms production. And this dealt a crippling blow to the USSR. But will the supposed Cold War 2.0 that we are in have the exact same results? Can the US basically make the Russians max out their credit cards to achieve victory… again?

Russia as it is today looks very weak compared to what it was during the Soviet period, but it has some major differences (and some would say advantages) that the USSR did not. Firstly Russia is Capitalist, no matter what anyone tells you, systemically Russia is not bogged down at all by the demands of Communist dogma. The entire dynamic by which things are produced and run is different. Secondly, there is no longer a hapless Warsaw Pact that needs to be trained, armed and run on Moscow’s budget.

21st Century Russia sells its developments for profit and at least in the case of Syria asks those like Assad to fight their own battles, perhaps with assistance, but Russia is very weary of repeating a Soviet-Afghan or Vietnam (from an American perspective) scenario.

The creation of a pilotless fighter jet is an example of logical military spending that is not in line with the Cold War failures of the USSR. As stated above because of human physical limitations new fighter jets will have to be drones in order to be competitive. This is just the nature and direction of war, creating this sort of project is a logical next step and justified spending. This is not the same as Brezhnev era reasoning that if the Americans have X number of ICBMs with nuclear warheads (enough to destroy the entire world) then we need to build X + 1000 ICBMs to show them who’s boss, while the populous has to resort to sewing their own clothing due to deficits.

No matter what the Mainstream Media (or Kiev’s Fascist Trolls) try to push onto social media, despite sanctions, things in Russia are fine. The stores are full of things, much of which is made in Russia, including food which Russia now exports more than it imports. Starving out Russia like the West did with sanctions on the Soviet Union during the Interwar Period is not going to go so well this time. The dynamic by which Cold War 2.0 will play out is simply not the same or as simple as making cool computer graphics to show to a treacherous hapless Gorbachev.

Yes Russia is being forced to spend to “keep up” with the much wealthier United States, but this time around it is able to do this in a much smarter way, with Capitalism on its side and no need to produce vast mountains of useless weapons to support lazy “allies” or show the Americans they have “more” or something, the logic of Cold War 2.0 is just simply different. This new Hunter drone project is a good example of this. It is something the Russian military actually needs, seems to work (thus far) and that isn’t breaking the national budget, and could be sold in a few years to Multipolarity fans with big bucks in nations that don’t develop advanced arms. If Russia continues on this reasonable path of development we are in for a long Mexican Standoff this time, and perhaps that is a good thing.

The Rubik’s Cube seems to be an impossible puzzle but it’s easy to solve it using algorithms.