China gave Britain a stern warning this week that any naval maneuvers conducted with the US near its declared territories in the South China Sea will be met with a military response.

Beijing rapped London further, telling it to dump its “colonial attitude” with regard to Hong Kong. However, the ultimate leverage, was the caustic reminder to Britain that if it wants to trade with China in the future, then it better mind its manners.

Given the deepening turmoil over Brexit and the uncertain economic prospects once Britain quits the European Union, the British government is going to need every trading opportunity around the world it can muster. Keeping on good terms with China, the globe’s second-biggest national economy, will therefore be crucial for Britain’s post-Brexit survival.

Since taking office in July, Prime Minister Boris Johnson has been quick to talk up a future golden era of bilateral trade relations with Beijing. He has expressed an interest in China’s Belt and Road Initiative for global trade, and he has even dared to ruffle US President Donald Trump by calling for an end to the tariffs and trade war with Beijing, thus implying the White House’s hardball policy is wrongheaded.

But here’s the tricky balancing act facing Britain. In trying to ingratiate itself with both Washington and Beijing for future trade deals, London is caught in an awkward contradiction. To do Washington’s bidding, Britain will be obliged to join forces for fomenting aggression against China.

China this week preempted that development by telling Britain in no uncertain terms that it can’t afford to antagonize Beijing without foregoing future trade and investment. In short, London has to make a decision: does it want war, or peace and prosperity with China?

The rebuke from Beijing followed a visit to London last week by US Secretary of State Mike Esper. During a major set-piece speech, Esper called on Britain and other European states to focus on confronting China and Russia, whom he accused of posing as aggressors.

“It is increasingly clear that Russia and China want to disrupt the international order by gaining a veto over other nations’ economic, diplomatic, and security decisions,” Esper said, seemingly unaware of the absurd hypocrisy of his words.

There have also been suggestions that Britain’s warships will be joining with US forces in so-called “freedom of navigation” patrols in the South China Sea. The recently launched super aircraft carrier, Queen Elizabeth, is designed to be capable of hosting up to 70 US F-35 fighter jets. The temptation for London will be to join Esper’s rallying call because of the need to pander to Washington for future trade favors.

China’s ambassador to Britain, Liu Xiaoming, told media that if Britain embarks on such missions anywhere near islands claimed as Chinese territory, especially if the British are seen to be liaising with the Americans, then it will be viewed as “hostile”. The diplomat said such a development will be met with a military response.

He warned London not do America’s “dirty work” and rebuffed claims about “freedom of navigation” concerns as a cynical pretext for provocation.

Ambassador Liu said: “The South China Sea is a vast ocean, it is three million square kilometers wide. We have no objection to people sailing around there but do not enter Chinese territorial waters within twelve nautical miles. If you don’t do that, there shouldn’t be a problem. The South China Sea is wide enough to have free navigation of shipping.”

Major General Su Guanghui, the Chinese defense attaché in London, said that his country will continue to take a combative stance in what it considers to be incursions into its territories: “If the US and UK join hands in a challenge or violated the sovereignty and territorial integrity of China, that would be hostile action.”

Last year, Britain sent a warship HMS Albion near Chinese-claimed territory in the South China Sea, which led to a naval confrontation and break down in bilateral relations. That maneuver was under the watch of former Defense Secretary Gavin Williamson who habitually used bellicose rhetoric describing China (and Russia) as global threats.

China’s ambassador to Britain categorically stated that there can be no repeat of this British naval conduct near Chinese-claimed territory. Don’t even think about it, was the tone.

Nevertheless, the diplomat said that China wants to develop cooperative relations with Britain to boost trade and investment. He said that Britain would lose out massively from new telecoms infrastructure development if a proposed partnership with Chinese telecoms giant Huawei is jettisoned – under American pressure.

Thus, Britain has a simple choice really. It can either continue to serve as a henchman for Washington by offending China’s sovereign rights, or London can wise up and ditch its pretensions of colonial-era gunboat diplomacy. That means treating Beijing with the basic respect consistent with international norms.

It seems the days of British subterfuge and aggression on behalf of Uncle Sam are over. It’s totally unacceptable for such presumed privilege to wield aggression with impunity. And it is especially unviable when post-Brexit Britain is shaping up to be scuttling around the globe with a begging bowl for trade deals. 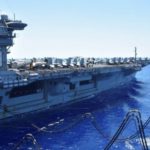 Deluded Britain Rows in Behind U.S. Gunboat Diplomacy on China

A Culture War Against China