Russia Is Responding Better Than Everyone Else to World War C

The largest country in the world is faring surprisingly well when it comes to surviving World War C, which is greatly attributable to Russia’s proactive measures in taking COVID-19 as serious as possible, including through border closures and the forthcoming imposition of what can be described as “lockdown-lite”.

Ahead Of The Curve

World War C has taken the planet by storm and is set to continue wreaking havoc across the world, but one country has thus far largely avoided the disastrous socio-economic consequences of COVID-19. Russia is faring surprisingly well when it comes to surviving this crisis, which is greatly attributable to its proactive measures in taking this pandemic as seriously as possible. It was one of the first countries to curtail the entry of Chinese citizens, as elaborated upon by the author in his piece last month titled “Russia Bans Most Chinese From Entry: ‘Pure Racism’ Or ‘Preventive Reaction’?“, and it was also the first in the world to do the same with Iranians, the latter of which are now suffering one of the worst viral outbreaks. These measures might have been controversial to some observers at the time, but are now vindicated in hindsight as having been essential to Russia’s success, according to the country’s World Health Organization (WHO) bureau chief.

Earlier this week, President Putin strongly recommended that his people exercise the utmost caution with respect to this deadly virus. According to the official Kremlin website, he told them the following:

“I am addressing all our citizens. Let us not rely on chance as we tend to do in Russia. Do not think, as we usually do, that this cannot happen to you. It can happen to anyone. And then we will very quickly see what is now happening in many western countries, in Europe and across the ocean, happen here in Russia. We must strictly comply with all the recommendations. We must protect ourselves, our families and friends, and we must adopt a more disciplined and responsible approach. Trust me: the best thing to do now is stay home.”

He also unveiled a generous socio-economic support package that RBTH handily summarized as including the following:

2. The vote on constitutional changes has been postponed from April 22 until further notice

3. All social benefits are to be extended automatically, no documentation required

4. All families that qualify for maternity benefits are to get an additional 5,000 rubles (ca. $63) monthly for each child under 3 for the next three months starting from April, 2020.

5. All employees on sick leave will not have their pay reduced below the minimum wage – this provision will last through 2020

7. All private loans and mortgage payments are to be frozen for borrowers who provide evidence of a more than 30% decline in the ability to repay (failure of business, salary-related issues, etc.)

8. Concerning businesses suffering through the COVID-19 outbreak, the new measures are as follows:

* Small and midsize businesses: tax payments – aside from value added tax – are to be postponed for six months.

* Microbusinesses: an additional postponing of insurance payments for six months.

9. A six-month delay in loan payments for all small and midsize businesses

10. Additional measures for strengthening small businesses are to be introduced

11. A six month moratorium on bankruptcy claims for businesses operating in areas hardest hit by the outbreak

12. Dividend tax rate is to indefinitely be increased to 15 percent in case of money taken out of the country

13. Returns on each personal investment, including bank deposits and stocks exceeding the total sum of 1 million rubles (ca. $12,600), are to indefinitely be taxed 13 percent”

This policy is all the more impressive when considering the ongoing oil price crash that’s also had a pretty hard impact on the ruble, the former of which was elaborated upon by the author in his article about how “Russia’s Rejection Of OPEC+ Was The Result Of Cold Geostrategic Calculations” while the latter was reported on by RT which published a piece last week dramatically headlined “As markets panic, Russian Ruble is WORLD’S WORST performing currency in 2020“. Quite clearly, Russia is putting its people above everything else, as it and all other countries should be doing during this global crisis.

That’s not all, though, since Russia’s doing even more than that to ensure that its people remain as safe as possible during World War C. All arrivals from abroad were mandated to quarantine themselves for two weeks prior to this week’s decision to outright suspend all flights to and from foreign countries except those repatriating Russians abroad. According to RT, the government is using facial recognition to enforce its mandatory self-quarantine policy for all arrivals, while Reuters reported that it’s also using mobile phones to track people at risk of coronavirus.

Furthermore, the Russian government adopted amendments punishing those who violate their quarantine restrictions with a maximum fine of 300,000 rubles (~3,890). Moscow Mayor and first deputy chairman of the Russian government’s response to coronavirus Sergei Sobyanin, meanwhile, suggested that all senior citizens above the age of 65 living in cities with more than one million people be placed under quarantine, and he also said that all shops except for grocery stores and pharmacies will be closed in the capital until 5 April since the coronavirus infection there hasn’t yet peaked.

Given the seriousness of the situation, those who spread fake news about it will be fined up to 3,000,000 rubles ($37,320) and the Russian government is demanding that social media platforms remove their content, with TASS reporting that “Facebook agreed to delete false information that is deemed socially important which undermines public order and security.” It’s unclear if the false information that was deleted relates to the Alt-Media Community‘s widespread speculation that the virus is man-made, but that theory is at odds with the findings of a leading specialist in infectious diseases at the Russian Health Ministry who carried out a study decoding the novel coronavirus genome which showed that the deadly virus had not been created in a lab.

The Russian government is proactively doing everything in its power to prevent its people from suffering the socio-economic consequences of World War C, and thus far, it can objectively be said that the state stands head and shoulders above all the rest except for China in this respect. President Putin and his team are leading from the front, reassuring Russians with concrete actions designed to mitigate the effects of this virus, and they therefore deserve to be applauded for showing the world the right way to respond to this global crisis. None of this guarantees that Russia will be spared from the ravages of COVID-19, but it’s doing more than practically anyone else to ensure that it’s as properly prepared as possible to weather World War C, which could put it in one of the most globally advantageous positions once the COVID World Order enters into being. 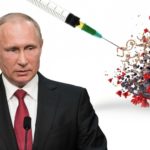 The Vaccine Race is a Race Against Capital Flight

Putin's Got His Problems, Too
Opinion
COVID-19Russia