The Pentagon’s Pandemic Posture Is All at Sea

According to the official U.S. manual Defense Support of Civil Authorities of 2019, “The mission of the Department of Defense in a pandemic is to preserve U.S. combat capabilities and readiness and to support U.S. government efforts to save lives, reduce human suffering, and slow the spread of infection.” But the Pentagon and its influential allies in the military-industrial complex have chosen to try to avoid the wider implications of the Covid-19 pandemic. The result has been focus on aggression at the expense of the nation’s well-being.

In spite of that, it has been impossible to disguise the hideous farce of the affair in which the commanding officer of the U.S. Navy aircraft carrier Theodore Roosevelt, Captain Brett Crozier, was summarily relieved of command by the Navy Secretary. This preposterous pantomime began when Crozier, aware of the threat of the pandemic and regretting that nobody in the senior echelons was doing anything constructive about it, sent a note to his superiors indicating that only a small number of sailors had been disembarked from his ship and that this was contrary to guidance concerning quarantine and social distancing.

Crozier wrote that “We are not at war. Sailors do not need to die. If we do not act now, we are failing to properly take care of our most trusted asset — our Sailors… Keeping over 4,000 young men and women on board [the Roosevelt] is an unnecessary risk and breaks faith with those Sailors entrusted to our care.”

Like all good officers, Crozier put his subordinates first in his priorities — ‘First, your subordinates; then your ship; last, yourself.’ It’s the same in almost every Military Service in the world, and if this leadership is discouraged armed forces fall apart. It seems, however, that the Pentagon is indifferent to that outcome and is content to not only discourage good leadership but is prepared to destroy those who display it. Never reluctant to become involved and to make an ever greater fool of himself, the President of the United States, the commander-in-chief of the armed services, butted in and declared “He shouldn’t be talking that way in a letter. I thought it was terrible what he did.”

Mr Thomas Modly, the Navy Secretary, in gross over-reaction, sacked Captain Crozier then flew at vast expense to Guam and addressed the ship’s company over the speaker system, trying to justify his action and insulting their former commanding officer to a background of jeers, yells and catcalls from the crew.

And one wonders what the sailors of U.S. Navy ships in the Persian Gulf might think of their commander-in-chief who tweeted on April 22 that “I have instructed the United States Navy to shoot down and destroy any and all Iranian gunboats if they harass our ships at sea.” Use of the phrase “shoot down” in relation to little patrol boats attracted derision, but is nevertheless a distinct threat that could easily lead to war with Iran, which seems to be what he wants. As reported by the Washington Post, the incident that took his ever-tweeting attention took place the previous week, when “the U.S. military said 11 small vessels belonging to Iran’s Islamic Revolutionary Guard Corps conducted ‘dangerous and harassing approaches’ toward a fleet of American ships, including the USS Lewis B Puller, an expeditionary mobile base vessel, and the USS Paul Hamilton, a destroyer. In one case, an Iranian fast boat zipped by within 10 yards of a Coast Guard cutter.”

It is doubtful if any U.S. navy commanding officer would “shoot down and destroy” a little motor boat that “zipped by” his ship unless direct orders had been issued to the effect that the rules of engagement at sea had been altered to include such an eventuality. The Deputy Defense Secretary David Norquist stated that “the president issued an important warning to the Iranians. What he was emphasizing is all of our ships retain the right of self-defense, and people need to be very careful in their interactions to understand the inherent right of self-defense,” which is absolutely meaningless. The cavorting was indubitably childish and silly and offended against the accepted norms of courtesy at sea, which most navies take very seriously, but in no manner could it be regarded as hazarding U.S. lives.

The absurdity of the Trump-Pentagon reaction to a few zooming motor boats is part of Washington’s concerted effort to bring Iran to its knees and encourage the population to rise up against the batty mullahs who run the country so badly. That this is involving the deaths of countless harmless Iranian civilians by denial of vital anti-pandemic assistance through vicious sanctions is neither here nor there : what matters in the Pentagon is the ascendancy of its war machine around the world. And this blinkered approach to international affairs is again manifesting itself in the South China Sea in which there has not been one single instance of China interfering with the countless commercial ships traversing these waters every year.

Washington’s Center for Strategic and International Studies notes that “The United Nations Conference on Trade and Development estimates that roughly 80 percent of global trade by volume and 70 percent by value is transported by sea. Of that volume, 60 percent of maritime trade passes through Asia, with the South China Sea carrying an estimated one-third of global shipping.” And there hasn’t been a ripple of interference by China.

But the Pentagon insists that “Through our continued operational presence in the South China Sea, we are working to promote freedom of navigation and overflight, and the international principles that underpin security and prosperity for the Indo-Pacific.” What Washington is doing, however, is deliberately ramping up tension with China. On April 21 al Jazeera reported that “the Haiyang Dizhi 8, a Chinese government research ship, was spotted last week conducting a survey close to an exploration vessel operated by Malaysia’s state oil company Petronas” which “prompted the U.S. to call on China to stop its ‘bullying behaviour’ in the disputed waters [of the South China Sea], citing concern over Beijing’s provocative actions towards offshore oil and gas developments there.” So in the middle of the pandemic crisis the Pentagon ordered deployment of more U.S. Navy warships to the region “to promote freedom of navigation and overflight” while China was rightly concentrating on sorting out its own critical pandemic problems and providing what assistance it can to other nations — notably to Malaysia, to which it sent “100,008 units of Novel Coronavirus Nucleic Acid Diagnostic Kit (PCR-Fluorescence Probing) test kits; 100,000 N95 face masks; 500,000 surgical masks; 50,000 units of Personal Protective Equipment (PPE); and 200 ventilators.”

These items were handed over to Malaysia on March 28, the same day that eight U.S. Navy sailors from the aircraft carrier Theodore Roosevelt “were sent to Naval Hospital Guam for treatment for COVID-19.”

The Pentagon’s fandangos are indicative of misdirected priorities, which themselves reveal a deep malaise among Washington’s best and brightest. But the malaise is not Covid-19: it is ignorance, pettiness and malevolence, in the character of the commander-in-chief, who is all at sea, and making us all sea-sick. 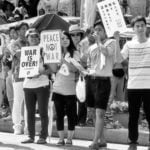 Military Spending and the Pandemic

Will the US be Sued over COVID-19? Or what have Pentagon’s Biolabs been Up To?

Will This Pandemic Finally Mark the End of the US Carrier Fleet?

As COVID-19 Spreads Through Ranks, Pentagon Stages Show of Force Against China

The Project for a New American Century and the Age of Bioweapons: 20 Years of Psychological Terror

What Kind of Game is Joe Biden Playing in Afghanistan?
Opinion
COVID-19PentagonUS