COVID Versus a Natural Catastrophe

Imagine! – Tomorrow, or one of these days, a gigantic earth or seaquake would shake the Atlantic Ocean or the Pacific, or god-forbid, a meteorite would hit one of these Great Seas – triggering a monster tsunami that would devastate most of the US East Coast – New York, Washington, all the way up to Boston and all the way down to Miami; as well as the Western European Coastline, including the UK; London under water, the Bretagne (Britany) flooded – and flood waters would reach all the way to Paris.

Or, in yet another scenario, imagine, one of Washington’s presumptuous warmongers would through a preemptive act of arrogant stupidity trigger a nuclear war… the worst of all situations.

Covid would be gone at once.

From one moment to the next. The, oh-so deadly “pandemic”- that never was – but we were made believe – the so heavily touted contagion that just devastated during the months past the entire world economy, caused unfathomable suffering, misery, death by desperation, death by famine – death by suicide and mass human auto-destruction, death by associated causes by the millions, hundreds of millions, billions perhaps – that worst of all viral diseases humanity has ever known and suffered from – would suddenly come to a shrieking halt.

A genius virus – so genius, must be man-made – that hits the entire world, summer or winter – 193 UN member countries – at once – coincidentally beginning with the tolling of the bells into the Decade of the 2020s, triggering a global lockdown of 193 nations exactly at the same time – mid-March 2020. That genius non-visible enemy induces all 193 UN member governments to impose the same measures to save humanity – face masks that deprive you from properly breathing your life-supporting oxygen, social distancing – that prevents sharing and socializing with friends, lockdown of everything, shops, workplaces, entertainment, even a walk in the park is forbidden – all at once.

Every one of the 193 UN members experiences simultaneously the same predicament – a humongous danger to humanity. An invisible enemy that hits at once all corners of the globe indiscriminately, the South, North, East and West. Nowhere to escape. Only the moon, but the moon is already controlled and monopolized by one of our planet’s richest billionaires.

The corrupt politicians and so-called leaders of all the 193 UN member countries, sadly, they are all puppets of a Higher Power, all of them had let themselves be bought or coerced into the diabolical game plan of total digital control of body and mind, using this dubious invisible enemy – a virus – with a monstrous fear-propaganda, with falsified and manufactured statistics, leading 7 billion people into believing that they are at risk of death, and that only a total lockdown, in other words, annihilation of the global economy, can save them. Never mind your life-support activity and livelihood.

A catastrophic event, hypothetical, for sure, as described before, and Covid is gone. As if it never was.

All coopted and/or coerced – or generously remunerated politicians of the 193 UN member nations, would now scramble to get into their readily prepared bunkers and other safety holes. Suddenly, they couldn’t care less about the deadly virus that threatens the rest of the world. They were never threatened themselves; they were always safe.

Occasionally to strengthen their covid propaganda the one or the other announced with big-big brouhaha how suddenly covid-sick he or she became. Ambulance- and airlifting them into emergency rooms, with hourly media reporting, is part of the game. The public is in sympathy and believing that if they are not obedient… this nasty virus may hit them too.

A few days later, the “cured-again” politician emerges from his or her emergency situation – a brilliant PR stint. And very successful. It helped the bought and betraying government officials increasing their handle on the necks of people, their repression, and heightening their tyranny a notch or two. Their egocentric selves would seek the highest points to save themselves from the tidal waves, or the deepest bunkers to protect themselves from the nuclear dust and radioactive fallout, from the all-burning and obliterating mushroom cloud.

And then there are leaders (sic-sic leaders), who this very moment boldly, non-apologetically and without any scruples and empathy for their frightened-to-death co-citizens, declare, “Many of us are pondering when things will return to normal. The short response is never.”

And Boris Johnson, the self-styled czar of the United Kingdom, continues, “We have been through too much frustration and hardship just to settle for the status quo ante – to think that life can go on as it was before the plague; and it will not… We are resolving not to go back to 2019.”

Mr. BoJo shamelessly quotes from the infamous and diabolical book, ‘Covid-19: The Great Reset’, by Klaus Schwab, founder and President of the WEF – World Economic Forum, as reported today, 8 October by RT. The Great Reset is a disaster foretold – see this and this.

The 8th of October 2020, may be just a short time away from the hypothetical Blast of Nature, that would make Covid go away for good and forever – and would obliterate the UK czar’s and WEF’s dreams.

All those mediocre and outright immoral politicians have known all the time and know today, that the luciferian game they are playing is against the very people of their countries they were elected by. Can you even call this worthless lot ‘criminal’? Doubtful. Criminal requires some kind of value. These abject individuals have none. They know they are betraying the people, their co-citizens, their compatriots, with the masquerades, with the social distancing, with the segregation into solidary confinement. They know they are killing “their people” with fear and constant, everyday fear.

They know that all of what they are propagating and lying about to make you scared, is but a miserable farce, a scam. They know the fear they impose day after day, hour after hour, makes you vulnerable to diseases, all kind of diseases, because fear kills your immune system. These masters of evil do it anyway – and coopt their aids, doctors, scientists, by threatening them, directly or indirectly with job loss, with loss of reputation — and yes, they have families and many oblige for the sake of their families.

Not all. Thanks-god for the brave who come forward in Germany, Belgium, Austria, the Netherlands, Italy, Spain, the United States – and from ever more countries, to speak the truth. Speaking Truth to Power can never be defeated.

All these high-ranking government officials, the sold-and bought ones, those without conscience, those that have sold you, who would also sell their mothers for the sake of being rewarded with positive recognition by the little dirty, devoid-of-any-ethics elite; an elite, who just want to control the world, its resources. And, not to forget – an elite who assume for themselves the right to dispose of how many people they deem worthy to live on this Blue Marvelous Planet. The masters of eugenics.

Before the hypothetical catastrophe hit, this little elite was able to buy the entire United Nations system, so as to have all 193 members, and countless UN agencies, with the World Health Organization (WHO) as their forerunner. They adopt the same cruel and unbelievable measures against a virus, that may not be more than a flu-virus, called Covid-19, a derivation of the SARS-Cov-2 virus – a virus that is no threat at all, and least a pandemic. But with the power of WHO and her billion-dollar-profit interest groups, a pandemic was declared on 11 March 2020. No justification, and no questions asked.

Covid is a man-made virus, part of a bio-war arsenal, that can at will be mutated to become fiercer. Indeed, it may most likely already exist in such mutated strings and invade different parts of the world in various forms of severity.

Now, with Covid gone – hypothetically, that is – these un-people, at the helm of the 193 UN members, as they are not deserving being called people, these 193 heads of states and their obeying lackeys, they are now fighting for themselves. The vaccines that they so cruelly were coercing you to accept – or else; or fearing you into wanting – these meekly beings, are now at the mercy of nature. And so, would be the arrogant little politician, who unwittingly triggered the hypothetical nuclear blast, that, in turn triggered other blasts of worldwide dimension, catastrophe no end. – But, but honestly – who is to blame? Of course, Russia and China.

These covid-king politicians couldn’t care less about you. These now angst-ridden politicians, once seemingly preoccupied for your health, who insistently told you to get covid-inoculated to save your skin, they so easily abandon you to safe their own skin.

They are now so adamant to seek refuge — from nature. They let covid go.

Nature may know no mercy.

Not with them, not with the rest of us, Global Northerners, who have been sleepwalking like zombies in pre-lockstep conditions, despite the numerous warnings: Decades, if not more, of preparation, the 2010 Rockefeller Report, numerous WHO commissioned preparatory reports, then Event 201, that struck on 18 October 2019 in NYC, in full sight, just a few weeks before the well-planned worldwide “outbreak of the fierce covid disease”.

We were and are being clouded by cognitive dissonance – to remain voicelessly in our comfort zones. Yes, I’m talking about us in the Global North, or we, westerners, who are so much superior to those poor people in the Global South, those that we in the Global North have exploited and ransacked for centuries, have stolen their resources and deprived them of education and of a decent livelihood.

We of the Global North, we who have obeyed the 193 crooked and dishonest heads of states and their obedient servants, their bought medical crews, we too, are now exposed without mercy to this – hypothetical – natural catastrophe – or nuclear blast – whatever fate may hypothetically have in store for us. We too deserve it.

For the grace of being recognized by our immoral leaders, puppets to a higher force, a deep state, a dark state or a non-state monster, for that recognition, for that egocentric flaw of being accepted by the powerful, we have closed our eyes and let the devil walk right over us – and into us.

Covid is gone. For good. Never came back.

Hypothetically, the world as we knew it, is gone. By Nature. Mother Earth’s cleansing. Reset, yes, but not WEF-style. So easy. Universal Reset, caused by the real forces of Mother Universe – not by our lousy, man-made, bribe-prone fiat money.

Covid is gone – from one instant to the next. That shows once more how ignorant, selfish, and unconscious we are; unconscious of our fellow human beings, those from the Global South, whom we deprived of their wealth and education, and whom, to this day, we colonize with debt and by using them as guinea pigs, for example, to test all kinds of dangerous and controversial medication, including vaccines. In their wisdom as victims they may understand sooner than we do, what the 193 tyrannical governments are up to.

Hail to Covid. It may bring us the Light by suddenly disappearing – compliments of Nature’s Wrath. 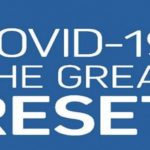 After Covid: Will the Recession Become a Depression?

Covid: A Curfew for What?

COVID-19 lockdowns are in Lockstep with the 'Great Reset'

Putin's Got His Problems, Too
Opinion
Agenda 21COVID-19