Middle East is on the Scales of US Politics

At a time when the tarnished Donald Trump knocks the thresholds of various kinds of courts in the vain hope of regaining his former glory, many heads of state, politicians and experts begin to seriously think about what to expect from Joe Biden, suffering from dementia. How should they do business with him if he really becomes the new President of the United States?

In the Middle East, one of the most challenging problems, as you know, is the relationship with the Islamic Republic of Iran. The matter here concerns not only the United States, which is trying to dictate its policy but also Israel and the Arab countries of the Persian Gulf located in the region and led by Saudi Arabia. Relationship with the largest power is a matter of life or death for them.

The first to hurry was Prime Minister Benjamin Netanyahu, who, without waiting for an official decision on the outcome of the elections, “cordially congratulated” Joe Biden, as the new US President, according to him. Speaking to the Knesset, he especially recalled two moments etched in his “memory and heart.” The touching remarks that Joe Biden made about Benjamin Netanyahu’s father after the latter’s death in 2012 and the long conversation when Netanyahu called Joe Biden after his son Bo’s death in 2015.

Many Israelis have sharply expressed themselves in the United with Israel news resources about the Prime Minister’s exceptional flexibility. Reader Edgar Fletcher wrote bluntly: “This is one of the most despicable articles I’ve read about Bibi. How quickly you turned your back on President Trump… I’m no longer in your corner. When Biden stabs you in the back in favor of Iran, I want to see what you say then.” Another, nicknamed DevilDog53, warned: “The Democrats will smile and shake your hand as they stab you in the back and conspire with your enemies. Never trust them.”

In this case, Riyadh acted more cautiously. The elderly King Salman’s experience played its role and congratulations to Joe Biden did not come immediately, described by the world media as a disappointment by the Saudi leadership with the “loss of Donald Trump.” Senior Saudi government officials have bluntly labeled Joe Biden as a “pro-Iranian president,” ready to embrace a conciliatory policy toward Tehran that would threaten the entire region. The Saudis quite justifiably believe that Joe Biden administration will consist of Barack Obama’s people. The new administration (if there is one) will then lift sanctions on Tehran. And in this case, the only thing left for the children and grandchildren of the Bedouins is that they continue to buy vast amounts of American weapons, which will safely rust on military bases in the desert. As the successful drone raids on Saudi oil facilities have shown, the American weapons, which were supposed to protect the Saudis, turned out to be simple junk, written off due to their old age by the US Army.

Iran has a long-standing position that it does not matter who leads the United States. However it can only be content with Joe Biden’s victory. In the past, and even now, the Iranians admit that unilateral, brutal US sanctions damage them. Iranian President Hassan Rouhani has already demanded that Joe Biden “make up for past mistakes” and restore the nuclear deal.

Considering that some light may have dawned at the end of the tunnel, the Ministry of Foreign Affairs (Iran) began its diplomatic game. It initially reacted coldly to a recently surfaced proposal for Joe Biden to renew the 2015 nuclear deal between Tehran and six world powers, including America. Foreign Ministry spokesman Saeed Khatibzadeh stated at a press conference that we are “unaware” of the comments made by Joe Biden’s aide suggesting a revised version of the original deal is on the table.

Saeed Khatibzade said that he does not know who made such comments, which is not a criterion for him. He described the JCPOA – the technical term for the agreement with Iran – as the fruit of ten years of negotiations legally binding on all parties. Tehran has always stated that the JCPOA is linked to the past and cannot be reopened. He reiterated the country’s top leadership statements that Iran will expect the United States to pay compensation for the profits lost due to severe sanctions illegally imposed by the Trump administration. At the same time, the Iranian official responded to comments made last week by Israeli Minister Tzachi Hanegbi that the renewal of the JCPOA would allegedly lead to a war between Israel and Iran. “Israeli officials are very belligerent, but they want to fight the war at the expense of the blood of American troops,” the Iranian spokesman said aptly.

At the same time, in a televised speech during the weekly meeting of the Cabinet of Ministers, Hassan Rouhani quite clearly and directly stated that “our goal is to remove the pressure of sanctions from the shoulders of our people. Wherever this opportunity arises,” the Iranian President added, “we will act by our responsibilities. No one should miss any opportunity.”

These facts clearly show that not everything is so simple concerning the Iranian Ayatollahs and that long and difficult negotiations are ahead if both sides agree to them. Elliot Abrams, United States Special Representative for Iran, said that, regardless of the Presidential elections’ results, the Trump administration continues to apply sanctions against Iran. He expects that the US-Iranian talks will still take place in 2021. The American emphasized that the Trump administration’s policy towards Iran includes negotiations with the Iranians, so even after President-elect Joe Biden is sworn in, “this is not a source of disagreement.” However, the veteran diplomat who served for many years in the administrations of several presidents and has colossal experience in negotiating said that “it remains to be seen” whether it is possible to return to the Iranian nuclear deal, which was signed in 2015 during Barack Obama administration.

In Washington, as noted by the American media and the current administration officials, there is a program of sanctions of maximum pressure on Tehran. Judging by the officials’ statements in the Trump administration it will continue in November and December because it has nothing to do with politics. It has nothing to do with the elections. “This is the United States’ foreign policy, and it is based on the behavior of Iran,” Elliott Abrams noted. The Trump administration is expected to add a “stream of sanctions” against the Islamic Republic to make it difficult for the Joe Biden administration to revive the 2015 nuclear deal. At the same time, there are speculations that the new administration will continue to use existing sanctions if it enters into negotiations with Iran because lifting them will be rather tricky.

But what is interesting is that the Democrats continue aiming at future negotiations with Tehran and finding a way out of the impasse into which Donald Trump drove the US-Iranian relations. Joe Biden’s aide Amos Hochstein said Biden would re-seal the deal during his first months in office. “We’ll either see him rejoin the deal fully, or what I would call ‘JCPOA-minus,’ meaning lifting sanctions in exchange for suspending some of the Iranian nuclear programs,” Amos Hochstein said. However, he added, Joe Biden wants “some change” in the deal before re-entering. The aide also informed that his boss is in favor of a two-state solution to the Israeli-Palestinian conflict. As a future president (if this happens), he will “return the Palestinian issue to the center of discussion.” This also makes the Israelis very nervous, and in particular, Benjamin Netanyahu is trying to prevent the Palestinians from creating their free state by any means. And this, in turn, is another highly controversial issue between Israel and the United States.

Of course, now everyone is ignorant about the future US President, which will become clear only on January 20 next year. But life goes on and various plans of experienced politicians continue to be built, who want to be prepared in advance for any ups and downs of history. 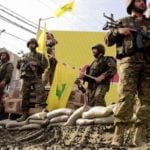 Middle East Peace and Hezbollah: A Bridge Too Far for Biden? 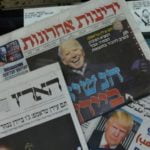 The Elections in the United States: a Middle Eastern Perspective

Encircling China and Praising India: The US Strategic Framework for the Indo-Pacific
Opinion
Joe BidenMiddle EastUS