Turkey is Set on Expanding its Influence around the World

When analyzing how the political situation is developing in a particular region, various analysts and observers usually focus on the geopolitical aspirations of the United States and China, the actions taken by Russia, NATO, and individual Western states, and on the ideology espoused by radical Islamism, which has amplified the threat of terrorism in recent decades. At the same time, the geopolitical ambitions held by Turkey have long remained outside the attention of the public – something that in all likelihood could be associated with the small size of the territory it occupies, or with the fact that it is a NATO member, which is cause to perceive this state primarily as part of the North Atlantic Alliance. However, if one were to analyze the foreign policy adopted by Ankara, and the activities performed by Turkish President Recep Tayyip Erdogan  in recent years, then Turkey’s earnest aspirations to increase its influence in international politics leap out dramatically.

Among the reasons for this trend, many analysts point to the ideas held by the Turkish leader that are gaining momentum about political Islam, Neo-Ottomanism and Pan-Turkism, and that by developing and vigorously promoting these in his domestic and foreign policy Erdogan wants to leave a “tangible impression” on history (and not only in Turkey).

Without any doubt, the roots of the ideology held by Erdogan today go back to the militant political Islam that emerged in Turkey in the late 1960s under the influence of the ideologist Necmettin Erbakan (the first Islamist prime minister of Turkey, and a mentor for the current president).

Recently, after Turkey’s direct armed intervention in Iraq and northeastern Syria, hybrid wars in Syria, Libya, and Yemen, and military tension in the Aegean and Mediterranean seas, Erdogan’s adventurism has switched over to a new theater of military operations: the Caucasus. This foreign policy and military expansion has begun to spread very actively and widely, positioning Ankara as a “regional leader” representing the “interests of different nationalities” and providing support, including military support, to pro-Turkish forces in Tunisia, Libya, Egypt, Syria, Iraq, and even to Myanmar and Xinjiang in China.

Significant emphasis has also been placed on setting up the essential prerequisites for consolidating the “territory of Turan” as a global supranational entity that unites both Turkic and other peoples in Central Asia and Siberia. For these purposes, Ankara is putting forth a lot of effort and funds to try to bring newly sovereign countries in the region under Turkey’s aegis, and constantly holding summits for Turkic states where the idea of military unity, among others, is leveraged with the goal of creating a kind of “Turkic NATO”.

Building up its influence in Central Asian countries, in October 2009 in Nakhichevan Turkey created the Cooperation Council of Turkic-Speaking States (Turkic Council), which includes Turkey, Azerbaijan, Kazakhstan, Kyrgyzstan, and Uzbekistan. At the same time, using various platforms Ankara proclaims that “in terms of its demographic and economic potential, the Turkic Council is quite capable of competing with the Eurasian Economic Union”.

All this attests to the fact that Turkey’s policy in recent years has been particularly focused on creating the institutional foundations for global Turkic integration, forming a shared Turkish economic and cultural space capable of providing a new leap forward for the Turkish economy, as well as becoming a base for a geopolitical strike against Greece, Russia, Iran, and China.

In this regard, it would not be superfluous to recall that there are six sovereign states in the world (Turkey, Azerbaijan, Kazakhstan, Kyrgyzstan, Turkmenistan, and Uzbekistan), where Turkic ethnic groups enjoy nationhood. In addition, there are nine national-level republics and autonomous regions: some are part of Russia (Bashkortostan, Kabardino-Balkaria, Karachay-Cherkessia, Sakha-Yakutia, Tatarstan, Chuvashia, and Crimea), others are part of China (Xinjiang Uygur Autonomous Region), while one is the unrecognized Turkish Republic of Northern Cyprus. Representatives of the Altai language family, which is close to Turkic in terms of its origins, have one sovereign state (Mongolia), four autonomous regions in Russia (Altai, Buryatia, Tyva, and Khakassia) and one in China (Inner Mongolia Autonomous Region). The fundamental nation, meaning the one that claims to hold the dominant position within the Turkic cultural and historical category – the Turks of Turkey – has about 35 million people.

This is where the “initiatives of Turkey” come from that have been launched in recent decades to create and use – in their Pan-Turkic plans – smaller, regional blocks such as the “Caucasian House”, “Islamic Confederation of the Caucasus”, “Islamic Chechen-Dagestan Confederation”, “Caucasian Common Eurasian Market”, a regional economic union of Georgia – Ukraine – Azerbaijan – Moldova (GUAM), the Black Sea Economic Cooperation (BSEC), the Central Asian Union (CAU) of Central Asian countries, and some others.

All this Pan-Turkic activity, taking into account the damage due to separatism that it could inflict on Russia and China, and substituting their regional influence with a “NATO henchman”, has been openly supported by Washington and its Western allies for the last thirty years within the framework of the “West-East” confrontation. Drawing on this, Ankara became confident in the infallibility of its Neo-Ottoman aspirations, and in the fact that Eurasian regional and continental security (including Southeast Europe, the Balkans, the Black, Adriatic, and Aegean Seas, the Eastern Mediterranean, the Near and Middle East, Asia Minor, the Caucasus, and Central Asia) is something that the West has entrusted to Turkey, and therefore its policies can receive nothing but support.

However, the “divergence of interests” between Washington and some of its western allies (in particular, France) and Turkey in a number of recent conflicts, especially in Syria, Iraq, and the Eastern Mediterranean, and for influence in Central Asia, the rapprochement between Ankara and Moscow, including after the former purchased a Russian S-400 anti-aircraft system, has forced the West to urgently make adjustments to its policy towards Turkey, and to put forward a series of reproachful statements and even threats of sanctions due to “disobedience”. And on November 17, in an interview with the French publication Le Figaro, Mike Pompeo bluntly stated that the White House and Europe must “jointly oppose the extremely aggressive actions of Turkey”.

Hence, nowadays Ankara is receiving increased criticism from Washington, Paris, and a number of other NATO countries “for its neo-Ottoman ambitions”, which no one simply wanted to notice before since Ankara “fulfilled a special mission of offering opposition along the West-East line”.

There is no doubt that this growing criticism of Ankara will most likely not change the Pan-Turkic, Neo-Ottoman activities performed by Recep Tayyip Erdogan , or how he uses them to further the interests of political Islam.

And for that reason the West, which has only just now decided to start criticizing Turkey, would do well to recall one of the commandments by Moses (Exodus 20, 4): “You shall not make for yourselves an idol”! 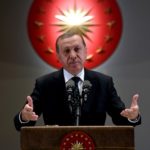