Bulgaria’s veto against North Macedonia’s accession into the European Union (EU) remains very likely despite initial speculations that it would not obstruct the former Yugoslav country from joining the bloc. Bulgarian Foreign Minister Ekaterina Zakharieva said that her country would block North Macedonia from joining the EU if it did not recognize that its national identity and language has Bulgarian roots.

If decisionmakers in the North Macedonian capital of Skopje agree, then Sofia is ready to recognize Macedonian as one of the official languages ​​of North Macedonia as long as it “acknowledges the historical truth.”

“We are not disputing their right for self-determination, neither their right to call their language what they like. We are ready to re-confirm the current realities, but they have to acknowledge the historical truth,” Zaharieva told Reuters.

Sofia and Athens stress that the Macedonian nation and language was engineered by Yugoslav communists in the late 1940’s to legitimize Marshal Tito’s claims over the northern Greek province of Macedonia, and to also weaken Bulgarian identity in the region so they would not make demands for unification with Bulgaria. Сenturies earlier, most people in what is today’s North Macedonia considered themselves Bulgarian. So the Yugoslavs had established a committee in 1945 to “create” a Macedonian language. In fact, Venko Markovski, a communist politician who participated in the Commission for the Creation of the Macedonian Alphabet in 1945 stated in an interview for Bulgarian National Television only seven days prior to his death that ethnic Macedonians and the Macedonian language do not exist and were the result of Comintern’s plans for the Balkans.

However, with the collapse of European communism in the early 1990’s, attempts of re-Bulgarianization were made against the people now calling themselves Macedonian. Further complexing the issue is Skopje’s insistence that a Macedonian minority exists in Bulgaria.

“Our concerns come from the never-ending claims for a Macedonian minority in Bulgaria. The acknowledgment of Bulgarian roots would put an end to this,” Zaharieva told.

Last Thursday, North Macedonia’s Prime Minister Zoran Zaev said he hoped the two countries would find a solution, but said that the identity and language of the country were not up for debate. It appears that North Macedonia’s first steps towards accession into the EU will end even before they begin.

Bulgarian demands are not new and it is likely they will opt to veto. Western powers interested in North Macedonia’s accession into the EU are expected to push Bulgaria to take a step back from their demands or form a compromise. North Macedonia’s problem is that even if accession negotiations start, there is still a long way to go.

On the other hand, there are many internal problems in the EU. This makes it difficult for the bloc to move towards enlargement in the coming years. At the top of the problems is the pandemic that is enough to put a brake on all enlargement processes. But there is also the deep division within the EU on how to deal with Turkey’s aggression against member states Greece and Cyprus.

From the Greek perspective, Bulgaria’s opposition to North Macedonia joining the EU is humiliating. Not only has it undermined Greece’s supposed elevated position to guide Balkan countries into joining the EU, but undermines Greece’s decision to recognize a Macedonian language in 2018. Athens effectively involved itself into a dispute that does not concern them, especially since there is no specific international agreement that defines language.

The 2018 Prespa Agreement that settled the name of “North Macedonia” between Athens and Skopje, was solely signed so that North Macedonia could join NATO, creating a host of other issues.

A few months ago, Bulgaria submitted to the capitals of the other EU Member States a lengthy memorandum entitled “Explanatory Memorandum on the Relations between the Republic of Bulgaria and the Republic of North Macedonia in Relation to the EU Enlargement, Accession and Stabilization Process.” Central to this memorandum is the national and linguistic interventions that took place in North Macedonia after World War II.

However, for all of Bulgaria’s opposition for North Macedonia to join the EU, they made no objections to them joining NATO. This suggests that Bulgaria found resisting Russian influence in the Balkans to be a bigger priority then the reclamation of the Bulgarian language and identity in North Macedonia. This of course is a curious decision, even when ignoring Bulgaria’s shared religion, alphabet and Slavic heritage with Russia.

Although Bulgaria’s independence was only secured thanks to Russian assistance against the Ottoman Empire, today Sofia is fully integrated into the Atlanticist world system, which is why they did not oppose North Macedonia’s accession into NATO, but takes a different line into integrating the former Yugoslav country into the EU. Bulgaria will likely veto the process into starting North Macedonia’s accession into the EU. For Brussels, this will not be a major issue as they are already dealing with a second wave of COVID-19, Turkish aggression against two member states, and a new wave of terrorism that has already struck France and Austria.

A Biden Administration Will Be Dominated by More U.S. Aggression 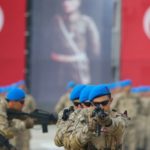 Turkey Creates Its Version of NATO?

How Enduring is the American-style Asian Version of NATO?
Opinion
BulgariaEUNATONorth Macedonia