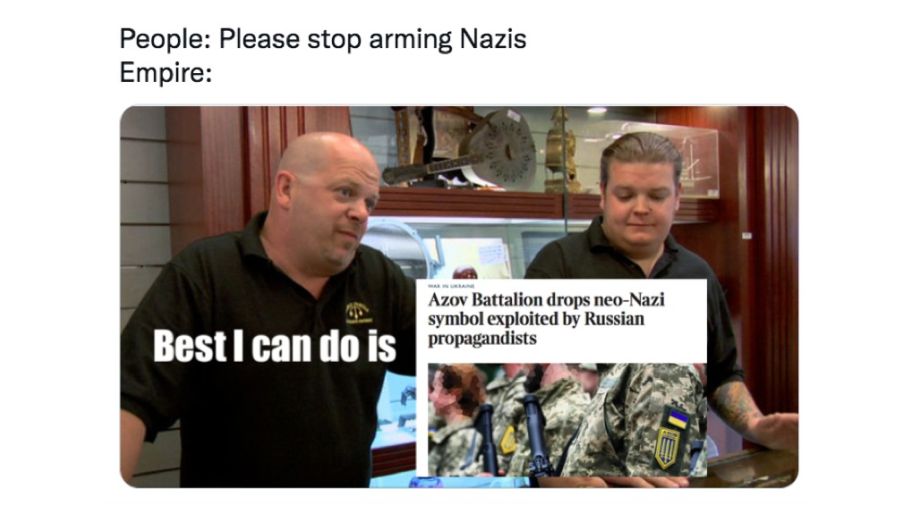 British empire smut rag The Times has a new article out titled “Azov Battalion drops neo-Nazi symbol exploited by Russian propagandists,” which has got to be the most hilarious headline of 2022 so far (and I’m including The Onion and other intentionally funny headlines in the running).

“The Azov Battalion has removed a neo-Nazi symbol from its insignia that has helped perpetuate Russian propaganda about Ukraine being in the grip of far-right nationalism,” The Times informs us. “At the unveiling of a new special forces unit in Kharkiv, patches handed to soldiers did not feature the wolfsangel, a medieval German symbol that was adopted by the Nazis and which has been used by the battalion since 2014. Instead, they featured a golden trident, the Ukrainian national symbol worn by other regiments.”

Claiming it’s “Russian propaganda” to say the Azov Battalion uses neo-Nazi insignia, and is ideologically neo-Nazi, is itself propaganda. A month ago Moon of Alabama published an incomplete list of the many mainstream western outlets who have described various Ukrainian paramilitaries as such, so if it’s only “Russian propagandists” who’ve been saying the Azov Battalion is neo-Nazi then Silicon Valley social media platforms should immediately ban outlets like NBC News, the BBC, The Guardian, and Reuters.

Before this war started this past February it wasn’t seriously controversial to say that Ukraine has a Nazi problem except in the very most virulent of empire spinmeister echo chambers. Even in the early days of the conflict it was still happening with mainstream publications who hadn’t yet gotten the memo that history had been rewritten, like this NBC News article from March titled “Ukraine’s Nazi problem is real, even if Putin’s ‘denazification’ claim isn’t.”

Just as disturbing, neo-Nazis are part of some of Ukraine’s growing ranks of volunteer battalions. They are battle-hardened after waging some of the toughest street fighting against Moscow-backed separatists in eastern Ukraine following Putin’s Crimean invasion in 2014. One is the Azov Battalion, founded by an avowed white supremacist who claimed Ukraine’s national purpose was to rid the country of Jews and other inferior races. In 2018, the U.S. Congress stipulated that its aid to Ukraine couldn’t be used “to provide arms, training or other assistance to the Azov Battalion.” Even so, Azov is now an official member of the Ukraine National Guard.

So plainly it is not “Russian propaganda” to highlight the established fact that there are neo-Nazi paramilitaries in Ukraine who are receiving weapons from the US and its allies. The change in insignia isn’t being made to correct a misperception, it’s being made to obscure a correct perception.

The change in insignia is a rebranding to a more mainstream-friendly logo, very much like Aunt Jemima rebranding to Pearl Milling Company due to the Jim Crow racism the previous branding evoked. The primary difference is that the corporate executives of Pearl Milling probably aren’t still interested in turning America back into an apartheid state.

As journalist Alex Rubenstein noted on Twitter, al Qaeda in Syria went through a similar rebranding not long ago for the exact same reasons:

Indeed it is very normal for the US and its allies to provide backing to fascistic extremists in order to advance imperial agendas, because those tend to be the armed factions in a given area who are willing to inflict the brutal acts of violence upon their countrymen necessary to facilitate those agendas.

From far right militias in Latin America to tyrannical jihadists in the Middle East, this pattern of backing murderous fascists and then having to manage public perception of their depravity has been going on a long time. After the US alliance began working with al Qaeda-aligned factions to push regime change Syria, it eventually became necessary for them to rebrand to appease public concerns about their image. When the US-backed Contras were committing human rights atrocities in Nicaragua to stomp out the leftist Sandinistas, the Reagan administration was launching a massive perception management campaign to manipulate the way people see the situation.

In Ukraine, neo-Nazi paramilitaries just happen to have been the armed thugs who were depraved enough to do what the empire needed done on the ground. As Ukrainian-American peace activist

The people in Donetsk and Luhansk were less lucky. The coup government dispatched the military to suppress their insurrections.

At first many Ukrainian soldiers refused to shoot at their own countrymen, in this civil war that their US-backed government started.

Seeing the hesitation of the Ukrainian military, far-right groups (and the oligarchs that were backing them) formed so-called “territorial defense battalions,” with names like Azov, Aidar, Dnipro, Tornado, etc.

Much like in Latin America, where US-backed death-squads kill left-wing politicians, socialists, and labor organizers, these Ukrainian fascist battalions were deployed to lead the offensive against the militias of Donetsk and Luhansk, killing Russian-speaking Ukrainians.

The fact that factions like the Azov Battalion have been the ones willing to get their hands dirty in Ukraine has been a major factor in their ability to shore up influence over the nation’s affairs far in excess of their numbers, a dynamic described in detail by The Grayzone’s Max Blumenthal and Alex Rubenstein. As noted by journalist Aaron Maté, when Volodymyr Zelensky was elected president of Ukraine these extremists openly threatened to lynch him if he worked to make peace with Russia as he had pledged to do.

Which is why when concerns were raised about arming neo-Nazi militias in Ukraine, the only offer on the table was a logo change. 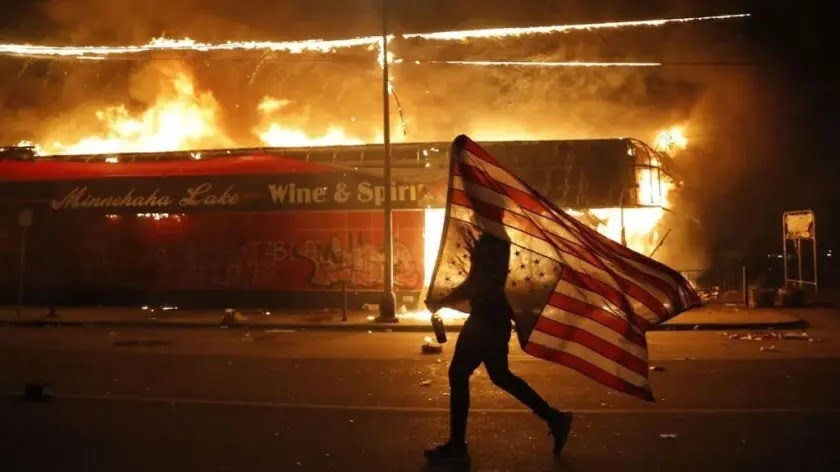 If someone wants to become somebody in Official Washington, there are certain lies that you must assert as undeniable truths, almost like flashing a secret sign to gain entry to an exclusive club. For instance, you must say that Iran is the world’s “chief sponsor of terrorism” though that is patently false. The problem is… 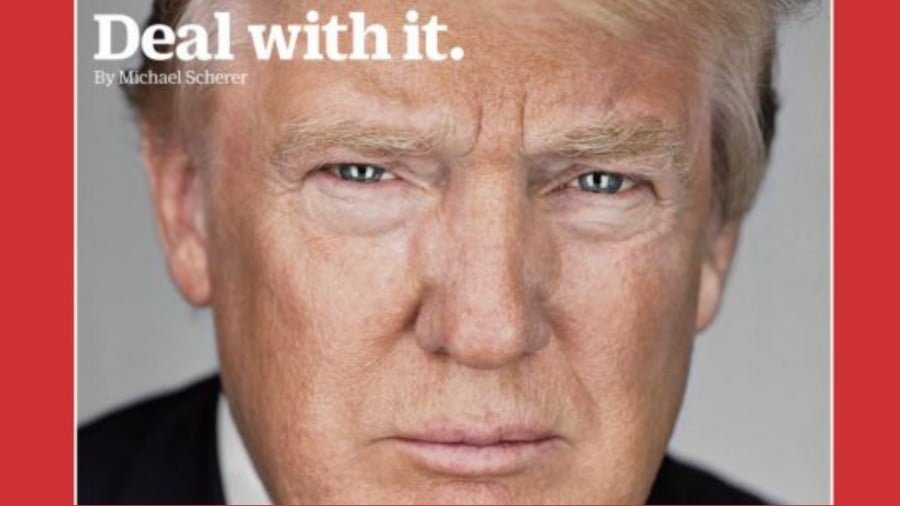 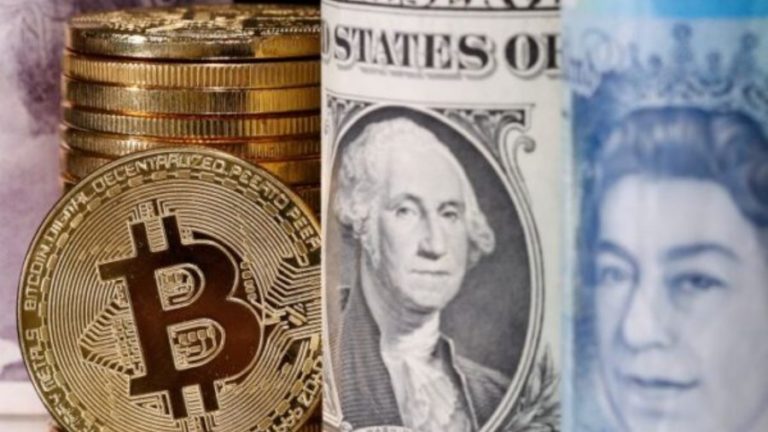