Iran and China Deepen Military Ties, Sending Strong Message to the US

Chinese Defense Minister Chang Wanquan recently met with the deputy chief of staff of the Armed Forces of the Islamic Republic of Iran, Brigadier General Ghadir Nezamipour, in Beijing on December 12.

According to the Diplomat, Chang and Nezamipour vowed to strengthen military cooperation between the two countries and maintain friendly military exchanges.

“Under the new circumstances, China-Iran cooperation faces an important opportunity, and China is willing to cooperate with Iran to make new contribution to bilateral ties,” Chang said, as quoted by the Chinese state-owned Xinhua news agency.

During his visit to Beijing, Nezamipour also met with Major General Shao Yuanming, deputy chief of the Joint Staff Department of China’s Central Military Commission. Shao Yuanming reiterated that both countries support each other’s core interests and stressed the importance of deepening the comprehensive strategic partnership between the two nations.

Iran has been eager to join the so-called Shanghai Bloc, an economic and security alliance led by Russia and China. Both Russia and China support Iran’s membership. The latest development only appears to confirm that Iran is days away from formally joining the alliance, and this should send a strong message to the U.S. and Iran’s arch-rivals Israel and Saudi Arabia that they may have to contend with Russia and China should they seek to engage Iran directly.

Surprisingly, NATO member Turkey has also signaled its intention to join the alliance.

In June of this year, Iran and China conducted a joint naval exercise in the Gulf, even while the U.S. Navy was pursuing a tense course of action in relation to Iranian ships in the Strait of Hormuz.

As it slowly but surely expands its reach in the Middle East, China is heavily supporting Iran in its bid to remove itself from the saber-rattling and stranglehold of the United States. Earlier this year, shortly after the Trump administration announced new sanctions against the Islamic Republic, a Chinese state-owned investment firm reportedly provided a $10 billion credit line to Iranian banks that will specifically use yuan and euros — not the U.S. dollar – as a means of bypassing U.S.-led sanctions.

Clearly, Washington’s control over the Middle East and Asia is beginning to wane increasingly as the years pass. The recent U.N. vote on Jerusalem, which took place after stern illegal threats from the U.S. that countries should vote alongside the U.S., is a testament to that fact that Washington can no longer control the narrative and the will of the rest of the world.

The only real option the U.S. has left is to resort to brute military force. However, that would clearly pose a problem as adversarial states like Iran continue to build meaningful relationships with nuclear powers such as Russia and China, which both oppose a western war against Iran.

Cold War Escapades in the Pacific

The China-Iran Deal: It’s Not About Business But Geopolitical Poker 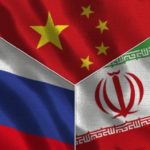 Syria Caesar’s Law: Who Does it Target, and How Will it Affect President Assad?

Syria: Will the Great Middle Eastern War Begin in the Levant?
Opinion
ChinaIranUS