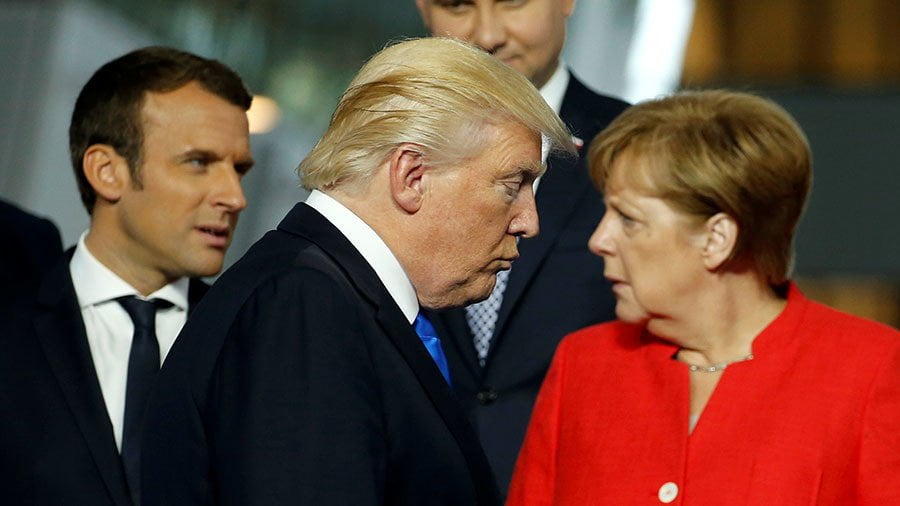 Like any successful wheeler and dealer, Donald Trump knows how to make his clients feel valued. But, as Angela Merkel and Emmanuel Macron discovered last week, there’s a considerable difference between sincerity and salesmanship.

PARIS – Barack Obama wasn’t very interested in Europe. Something which was made clear in 2010, when he didn’t even show up for an EU-US summit in Madrid. Instead, at least in the early part of his presidency, Obama focused on Asia. Leaving the old continent to dwell on its diminished importance in Washington.

Yet, despite this snub, Obama generally went through the motions and treated its leaders with respect. Indeed, he belatedly realized that the likes of Angela Merkel and David Cameron were liberal bedfellows useful for his issues-driven presidency. Nevertheless, there’s a lingering feeling that the Democrat darling never really got Europe.

By contrast, his successor Trump, with his family roots in Germany and Scotland, arguably understands the place better than any US president since John F. Kennedy. He’s married into both Czechia and Slovenia and spent decades crisscrossing the continent, pursing business deals from County Clare in Ireland to the Russian capital of Moscow.

And it’s clear all this experience has taught him not to take any of America’s NATO partners seriously. Because, make no mistake, Trump doesn’t see them as allies. Instead, he views them as client states who are subject to Washington’s orders.

Of course, the West European “big three” only have themselves to blame for this situation, as they never heeded the old maxim: “United we stand, divided we fall.” And rather than pooling resources to create the sort of “common European home” once proposed by figures as diverse as Mikhail Gorbachev and Charles de Gaulle, they’ve jostled for American favor. Which makes them appear weak and easily manipulated.

The contemporary roots of this self-defeating competition go back to 2003, when then British Prime Minister Tony Blair broke ranks with his EU partners to support George Bush’s illegal invasion of Iraq. Blair partially justified his unpopular gambit by making constant references to a supposed “special relationship” between London and Washington. Meanwhile, Bush, desperate for partners to help legitimize his aggression, went along with the rhetoric.

However, Berlin and Paris were not amused. Especially the latter which had to endure the ignominy of becoming America’s most-hated country du jour. During this hysteria, the French were labeled “cheese eating surrender monkeys,” French Fries were renamed “Freedom Fries” and even Woody Allen appealed for calm as he was tired of “freedom kissing” his wife.

Thus, when Nicolas Sarkozy replaced Jacques Chirac in the Elysee in 2007, he made it his mission to usurp London’s perceived golden child status in Washington. But then the financial crisis intervened, ultimately rendering Germany the most powerful of the trio, and Angela Merkel’s personal rapport with Obama eventually meant Berlin was in pole position by the end of his second term.

Under Trump this has all changed. The Republican hates Merkel’s liberal values and has spent the first sixteen months of his presidency lambasting Germany with a fervor US leaders usually reserve for “rogue states.” And this has left the door open for Theresa May and Emmanuel Macron to vie for his affections. Of course Trump, being a canny operator, is letting them demean themselves because, just as Bush used Blair to create an illusion of permissibility, he’s using the current British and French leaders to make it appear that he is well-regarded and respected abroad.

We saw this again last week when Macron and Merkel both, separately, visited the US capital. Sure, Trump said nice things, particularly about the former, and rolled out the red carpet. But he didn’t listen to what they came to say.

On the contrary, while Macron played to his own constituency, delivering a confident speech to Congress, Trump’s superciliousness was clear in his public exchanges with his young counterpart. And, despite the smiles for the cameras, this treatment must have hurt Macron, who sees himself as an equal to his American equivalent, as well as other heavy hitters like Vladimir Putin and Xi Jinping.

Meanwhile, Trump’s methods surely felt humbling for Merkel, who has always been regarded as a formidable operator in Moscow and Beijing. And was treated well by Obama, who made a point of visiting her in Berlin on his November 2016 “farewell tour.”

The problem for the West Europeans, whose own lack of unity has left them in this weak situation, is that they are completely reliant on Washington when it comes to foreign policy and security, particularly on Russia, China and the Middle East. Something which was completely exposed last year when British Foreign Minister Boris Johnson had to cancel a visit to Moscow because he needed to wait for former US Secretary of State Rex Tillerson to travel first and set out the US position, which London is obliged to follow.

This incredible state of affairs has long been referenced by Vladimir Putin, who has described NATO members as vassals, rather than allies, of the US. And Joe Biden backed up the Russian leader’s contention when he admitted that he personally railroaded reluctant EU members into imposing sanctions on Moscow. Measures which damaged some European economies, but hardly hurt the US. And examples like this leave Moscow and Beijing, and other powers, aghast.

Obviously, a potential solution is unified EU action, independent of Washington, but, even if the bloc could find common ground, Britain’s impending exit means the competition for a “special relationship” will probably intensify. At the same time, here in Paris, most folk seem to realize that their country’s status as supplicant to the US is both embarrassing and self-defeating. And you often hear the same thing in Berlin, and to a lesser extent, London.

Concurrently, in Moscow, the largest city entirely in Europe, diplomats, politicians and foreign policy analysts simply can’t understand how the EU, which boasts a larger economy than the US, and a 50 percent higher population has allowed itself to effectively become a political and military colony of a power based on different continent.

Sadly, while most smart thinkers recognize the problem, nobody has managed to find a workable solution. And as long as this situation pertains, none of the leading global troika is going to take Macron, May or Merkel seriously.

But while Putin and Xi at least show deference publicly, Donald Trump doesn’t even bother.