Veterans from the Kosovo Liberation Army (KLA) terrorist organization feel confident that because they were once supported and backed by the US and Western Europe in their campaign to violently separate Kosovo from Serbia, they are immune from prosecution and believe that their crimes can remain hidden. However, Milovan Drecun, the president of the Working Group of the Assembly Committee for Kosovo and Metohija, will soon launch a drive aimed at international audiences to highlight the brutal crimes committed by the KLA during the Kosovo War of 1998-1999, and have those responsible prosecuted.

Drecun, a Member of the Serbian Parliament since 2012 for the Serbian Progressive Party, has been collecting facts and evidence with the working group to shed light on crimes against not only the Serbian minority in Kosovo, but also against other national communities like the Roma, Gorani (Slavic Muslims in southern Kosovo) and Bosnian Muslims. He also refutes allegations made by the Secretary of the Association of KLA War Veterans, Faton Klinaku, that the facts and evidence collected were from interviews conducted in Serbia under pressure and from threats of death.

“First, the representatives of that association are lying when they talk about the manner of questioning witnesses. Our authorities can mediate in establishing contact with our citizens with whom the Specialized Prosecutor’s Office wants to talk,” said Drecun.

Statements are taken by the Specialized Prosecutor’s Office, and that is a major inconsistency in the claims made by the KLA veterans association. The Specialized Prosecutor’s Office was formed on the basis of law adopted by the Pristina Parliament. Drecun highlights that his group do not hide that they “have an extremely important database and documents” and “have the names of potential witnesses for crimes committed by the criminal KLA.”

Authorities in Serbia meticulously collected all data on crimes committed during and after the 1998-1999 conflict. The findings were made available to the Specialized Prosecutor’s Office to try and establish the truth about criminal allegations and to punish perpetrators if found guilty.

“However, we now have a completely different situation here, where terrorists from the criminal KLA are trying to hide the truth and compromise the evidence available to Serbia. We have never hidden our cooperation with the Specialized Prosecutor’s Office,” said the Serbian MP.

The Republic of Albania, for example, knows a lot about KLA crimes, not only against Serbs, but also against Albanians. Drecun’s Working Group has made available the data that the Specialized Prosecutor’s Office was interested in, and if there are lawsuits, they will be verified and accepted as evidence in court.

“We will present all the documentation at our disposal, and I will present a lot of things to the entire international public through the Working Group, because we will launch an international campaign to show the extent of the criminal activities of the terrorist KLA,” Drecun announced.

Serbian President Aleksandar Vučić was due to meet Kosovo leader Hashim Thaçi in June for a historic meeting at the White House at the behest of US envoy for Kosovo-Serbia negotiations, Richard Grenell. However, this meeting ended before it could even begin as Thaçi became indicted for war crimes and crimes against humanity for actions he allegedly undertook during the Kosovo War.

Thaçi in 1993 became a prominent member of the “Kosovo Liberation Army” (KLA) and became responsible for the finances and armaments of the terrorist organization. The KLA financed its activities by turning Kosovo into a drug smuggling hub to distribute heroin and cocaine throughout Europe.

A 2008 report by German intelligence service BND accuses Thaçi of having deep involvement in organized crime, saying that “The key players (including Thaçi) are intimately involved in inter-linkages between politics, business, and organised crime structures in Kosovo,” and that Thaçi is leading a “criminal network operating throughout Kosovo.” The charges laid against him by the prosecutor’s office in the Hague include murder, enforced disappearance of persons, persecution, and torture. He has also been accused of organ harvesting and drug trafficking by other reports and institutions.

Thaçi has not been found guilty yet, but it is well established that the KLA engaged in such activities under the watchful eye of NATO who were satisfied to allow such a prevalence of criminality to occur in order to weaken Serbia, which especially in this period, was extremely pro-Russia. However, by ignoring such illicit activities, Kosovo has become a cemented crime hub of Europe that is now difficult to control as Western Europe continues to be flooded with narcotics and human trafficking.

Although the Working Group has ambitions to broadcast internationally the crimes of the KLA, it is likely that their finding will be ignored by the Western press. This is not only to cover their own embarrassment for supporting a drug trafficking terrorist organization, but also because Yugoslavia has already been dismantled and Kosovo is no longer a top priority for the West, even when considering the recent Belgrade-Pristina economic deal made in the US just days ago.

What Exactly Connects the White House, Jerusalem, Belgrade and Pristina? 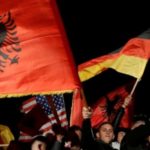 U.S. Is Pushing for a New Provocation Against Serbia over the Kosovo Issue

EU Trying to Take Over Serbia-Kosovo Negotiations From U.S.

Germany’s Kosovo Policy Shift. Implications for Serbia and the EU

The Post-WWII Albania And Kosovo