What happened in the Capitol on Jan. 6 was not surprising. It could have been avoided. It could have been prevented if the Democratic Establishment which held onto keys of power throughout Trump’s mandate had truly wanted a smooth presidential transition. For months prior to the election, the elite Transition Integrity Project was spreading the alarm, loudly echoed by liberal media, that Trump would lose and refuse to acknowledge his loss.

There was a simple, obvious way to avoid such a drama. In an article for Consortium News last August, I suggested how this could be done.

“It seems to me that if the Democratic establishment gave priority to a peaceful election and transition, against the possibility that Trump might reject the results, the smart and reasonable thing to do would be to reassure him on the two counts which they suggest might incite him to balk: postal vote fraud accusations and the threat of criminal charges against him. […]

As for postal balloting, it should be conceivable that Trump’s misgivings are justified. […] In an age when anyone can photocopy any document, when mails are slow and when there are many ways in which ballots might be destroyed, such misgivings are not far-fetched. […]

For the sake of domestic peace, why not try to find a compromise? Kamala Harris has introduced legislation to generalize postal balloting. Why not, instead, extend polling time, opening polls not only on the second Tuesday in November but on the preceding Saturday and Sunday? This would provide time to allow voters afraid of Covid-19 to keep distances from each other, as they do when they go to the supermarket. It would reduce the number of absentee ballots, the time needed for counting and above all the suspicions attached to postal voting. But the more wary Trump is of postal voting, the more Democrats insist on making it universal.

It becomes clearer and clearer that hatred of Trump has reached such a pitch, that for the Democratic establishment and its hangers-on, defeating Trump at the polls is not enough. They are practically inciting him to contest the election. Then they can have something more exciting and decisive: a genuine regime change.”

So indeed what we got was something more exciting. Not exactly regime change, because we are seeing instead a powerful reaffirmation of the regime that was really still there during Trump’s largely deformed four-year term. The haste with which his aides and allies desert him in his last hour makes this clear. He was always a president without a team, operating on hunches, rhetoric and advice from his son-in-law and a few insiders who were really outsiders.

But what we are getting is indeed exciting: an alleged “insurrection” supposedly incited by Trump to “steal the election” (which it had absolutely no way of doing). The scenes of disorder have been instantly exploited to plunge him and his followers into an abyss of ignominy, if not criminal proceedings and imprisonment.

What happened on Jan. 6 was not an insurrection. Anyone wanting to know what an insurrection is should look up the U.S.-sponsored armed uprising that overthrew duly elected Chilean President Salvador Allende on Sept. 11, 1973. The Capitol disturbance was more like what happened when U.S.-trained “Otpor” militants broke into the Serbian parliament in the midst of that country’s 2000 presidential election and set fire to ballot boxes.

Or check out a particularly pertinent insurrection when truly violent demonstrators took over the Ukrainian Parliament in 2014 and overthrew the government, an event hailed by then U.S. Vice President Joe Biden as a great victory for democracy. Then there was the Hillary-endorsed coup in Honduras, the almost successful attempt to overthrow democracy in Bolivia, the U.S.-backed Guaido farce in Venezuela, etc., etc., etc.

No, an insurrection is not when a large crowd of people who feel their candidate has been cheated vent their indignation by managing to break into “their” parliament with no purpose in mind. Most of the intruders milled about taking selfies with no clear idea what to do next. By world standards, the “violence” on Jan. 6 was very mild indeed, the only gun violence being the fatal shooting of an unarmed Trump enthusiast, Ashli Babbitt, who could easily have been pushed back from her adventurous attempt to climb over a barricade.

The intrusion was so far from carrying out a pro-Trump plan that it had the opposite effect. The immediate political result of the eruption of the undisciplined crowd was to prevent Republican Senators who were so inclined from presenting their arguments against the legitimacy of the November vote. If anything, the action worked in the favor of President-elect Biden.

One might think that in his moment of victory, a true statesman would demonstrate the qualities it takes to lead a nation by offering to bring all people together as fellow Americans. He did quite the opposite.

The very next day after the Capitol happening, in his small fiscal haven home state of Delaware, Biden raged against his opponents as a terrorist mob, no less.

“They weren’t protestors,” he proclaimed. “Don’t dare call them protesters. They were a riotous mob. Insurrectionists. Domestic terrorists. It’s that basic. It’s that simple.”

Trump, said Biden, “has unleashed an all-out assault on our institutions of democracy from the outset, and yesterday was but the culmination of that unrelenting attack.” Trump had poisoned the political environment by using “language that autocrats and dictators use all over the world to hold on to power.”

So even before his inauguration, President-elect Biden has given us a bitter taste of days ahead. There is to be no sacred unity, but deepened division between The Good (woke liberals), the Bad (Russians and other enemies of Our Democracy) and the Ugly Americans, to be labeled Domestic Terrorists, White Supremacists and fascists.

The authoritarian center, ranging from opportunistic Republicans to The Squad, can rally around the necessary purge of Domestic Terrorists, silencing their communications and getting them properly fired from their jobs.

The Establishment has long been determined to crush Trump. But there is talk of “purging” all his followers as well. Biden is already speaking like a War President, calling for measures to combat the internal enemy such as accompany major wars.

The oligarchic nature of the American War Party is revealed by the haste with which privately owned social media enterprises silence dissent – even the still acting President of the United States. Indeed, who really rules the United States? Is the president only an agent of economic powers whose role is to serve their interests? And the trouble with Trump is that he had not been picked for the job.

Trump managed to appeal to millions of discontented Americans without offering any coherent practical program to replace the War Party with policies capable of transforming the nation into a haven of peace and prosperity. His confusion mirrored the ideological confusion of a population scandalously undereducated in history and political ideas. The illusion that Trump was the leader dissident Americans needed cost Ashli Babbit her life and led thousands of Trump voters into what amounts to a trap. Trump himself was led into the trap.

A completely different approach to politics is needed to restore democracy to America. All appeals to identities and ideologies can only deepen the confusion and divisions, because they prevent people from understanding each other.

The Biden administration appears intent on strengthening such confusion and divisions precisely by recourse to identities and ideologies. I firmly believe that only a scrupulously rational, open-minded, factual and pragmatic approach to clearly defined practical problems could bring peace to the United States, a peace that could favor peace in the world.

From outside the melee, it is easy to define the serious issues that should dominate political debate in the United States. But instead of that, we hear a torrential exchange of insults. The establishment elite cannot stoop to exchange viewpoints with populists denounced as deplorable, racist, misogynist, white supremacist, fascist and now even “terrorist.”

The populists’ unfocused denunciation of the elite describes Wall Street Democrats as “socialists” and veers off into accusations of genocidal vaccination campaigns, occult pedophile rites and Satanism. Instead of anything resembling a clear political division, America is increasingly split by blind, burning mutual hatred.

What American political life needs is not more censorship, but the self-censorship of reason. That is very far away. 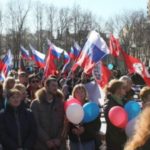