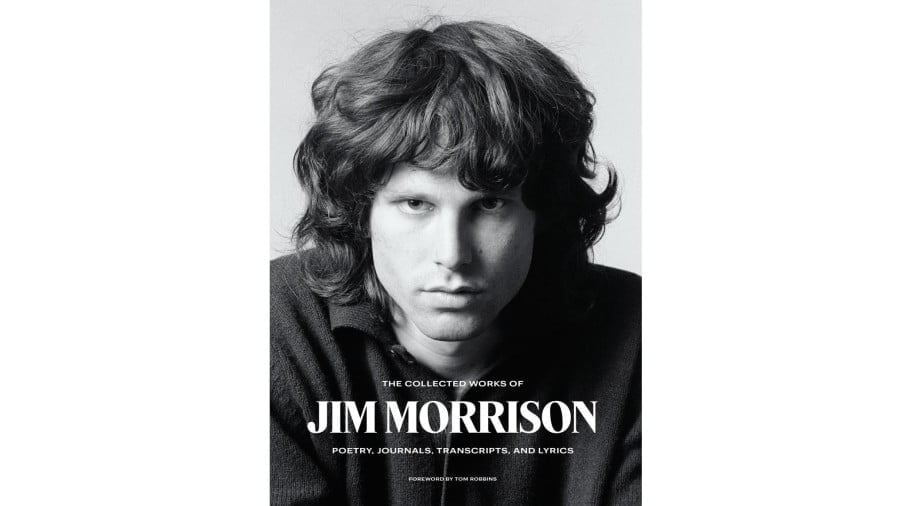 He was like Blake’s tiger, always burning bright and chasing Rimbaud rainbows – just to finish, like Marat, in a bathtub. He was only 27.

Jim Morrison died on July 3, 1971 in Paris. Half a century later, The Collected Works of Jim Morrison: Poetry, Journals, Transcripts, and Lyrics lavishly celebrates the soul of the poet.

Before he died, Jim had self-published three limited editions of his poetry: The Lords/Notes on Vision (1969), The New Creatures (1969), and An American Prayer (1970).

Now, finally, we may have access to his complete writings, including the screenplay for his 50-minute experimental film, HWY, shot in Godard’s cinema verité style in the spring and summer of 1969 in L.A. and the Mojave desert, with Jim playing a hitchhiker. Old-school petrol heads will savor Jim on the wheel of his 1967 Shelby GT 500 Mustang in this HD clip from a film inspired by HWY.

The Collected Works feel like a collar of magic jade fragments, complete with handwritten pages in notebooks, crossed out words, underlines, the whole perhaps similar to the ‘Plan for Book’ Jim once sketched.

The overwhelming majority of us baby boomers belong to the “die young, stay pretty, leave a beautiful corpse” generation. Following our own road maps, prone to trial and error, we did live all the roads of excess; but unlike Blake’s dictum, we may not have reached the palace of wisdom. We never cease to be amazed that unlike Morrison, Hendrix, Joplin, Otis Redding, we are survivors at best.

For so many of us then in our teens, from 1967 to 1971 the Doors were impregnated in our body and soul. Jim was the psychedelic Dyonisus, his excessive alter egos – Lizard King, Mr. Mojo Risin’- propelling him over and over again towards the next ride in the infinite highway.

Before he metastasized into instant legend, Jim was what Hunter Thompson would immortalize in Fear and Loathing in Las Vegas, which came out in 1971: “A man on the move, and just sick enough, to be totally confident”.

Now the poetry oozing out of the freestyle soundscapes weaved by Krieger, Densmore and Manzarek, or HWY as a sort of prelude to L.A. Woman (“cops and cars / the topless bars / never saw a woman / so alone”) may be relieved as a prequel to what was about to vanish, poignantly evoked by Thomas Pynchon in Inherent Vice, the Greatest Hippie Detective Novel – or Raymond Chandler on LSD:

The Psychedelic Sixties, this little parenthesis of light, might close after all, and all be lost, taken back into darkness… how a certain hand might reach terribly out of darkness, and reclaim the time, easy as taking a joint from a doper and stubbing it out for good.

And all the children are insane

Any Top Ten list of 20th Century Poetry in the Anglo-American sphere would necessarily include Yeats’s The Second Coming, Eliot’s

Ballad of a Thin Man, Desolation Row and Visions of Johanna to the total dilaceration in Blood on the Tracks (Tangled Up in Blue, Simple Twist of Fate).

And then, there’s Jim Morrison’s The End – the closing track of

The Doors, recorded in August 66, released in January 1967, six months before the Summer of Love.

It was my dear friend Quantum Bird – not even born when Morrison died – who led me to a re-appreciation of The End in the Western canon, prompted by a Morrison epigraph I used in a column on NATO.

Striking images emerge like rocks out of the Morrison river, like “the streets are fields that never die”, in The Crystal Ship, or “speak in secret alphabets”, in Soul Kitchen.

Strange Days could not be more contemporary: “Strange days have found us / strange days have tracked us down / they’re going to destroy / our casual joys / we shall go on playing / or find a new town”.

Yet we could only guess what shore Morrison’s Crystal Ship was heading for, the words – “be-fore / you / slip / in-to / un-consciousness” – coiling like a snake, barely whispered. The journey could be anything: Chandler’s Big Sleep, an overdose of heroin, a ghastly murder, suicide, even a suicide pact.

Morrison was usually Blake on steroids, rewriting “some are born to sweet delight / some are born to endless night” in his own way. The End is a journey through the corridors of the endless night (“the killer awoke before dawn / he put his boots on / he took a face from the ancient gallery / and he walked on down the hall”). No wonder Coppola carefully chose it for the opening of Apocalypse Now – or Conrad’s Heart of Darkness set in Vietnam, where the Empire was lost “in a Roman wilderness of pain / and all the children are insane”.

In 1966, when he wrote The End, two years before the assassination of Dr. Martin Luther King and Bobby Kennedy, it’s as if Morrison had already intuited that as a poet laboring at the apex of Empire, life would become necessarily unbearable.

LSD + Rimbaud + insights in Navajo land only amplified his aesthetic and philosophical illuminations. The End includes references to “every element of systemic collapse”, as Quantum Bird remarked, from imperial arrogance to cultural collapse, from wokeism to loss of control of the empire’s own internal space, from dystopic propaganda to the sense of total bewilderment facing a dying ethos. Woke soldiers are about to be reprogrammed as serial killers.

When the Empire collapses “in a desperate land” – look at the tawdry, farcical Afghanistan remix, happening right now – there’s “no safety or surprise”. It’s “the end of laughter and soft lies / the end of nights we tried to die.”

The end of everything that stands.

I’ll leave you now mentally riding a Mustang in the desert, down on the infinite highway and – in geopolitical synchronicity – riding the snake.

Julian Assange – held under psychological torture in Belmarsh by the lords of the Empire for the crime of committing journalism – is 50 years old today. Julian Assange was born the day Jim Morrison died.

Dance on fire. If you dare.

By Pepe Escobar
Source: The Vineyard of the Saker

2016 looks like it will be a record year for gun sales. The number of NICS background checks for firearm purchases has risen annually for 18 straight months, hitting 22.2 million at the end of October versus 23.1 million in 2015. Analysts expect Smith & Wesson and Sturm Ruger — the only two publicly traded gunmakers…

“It would change the outlook on Treasuries quite a bit if you started to price in a fairly large liquidation of their reserves…” Submitted by Tyler Durden: On Tuesday evening, we asked what would happen if emerging markets joined China in dumping US Treasurys. For months we’ve documented the PBoC’s liquidation of its vast stack…

A five-day pollution ‘red alert’ has been announced in China’s capital, Beijing, and other cities, with schools closed, roads blocked, and residents told to stay indoors. Over 20 more cities are also said to be affected. The warning came into effect on Friday at 4:20pm, as the main Chinese news agency tweeted “Smog invades Beijing,”…

I speak from my own perspective of course, but isn’t Christmas a bore these days? Spending time with family and loved ones is wonderful for most, but sanctioning it as an official holiday has become tedious, draining and for many that have ‘woken up’ to the ‘reality of ‘reality’, just another focus for an ‘energy…

At first, it might sound strange (throwing away your shoes and walking barefoot in the grass or sand) but there is evidence that this can be very beneficial for your health. It lowers free radical damage, inflammation, stress, and pain. The more time we spend in shoes and indoors, the more important it becomes to…